The world is searching for alternatives to the US dollar. Everybody anticipates that the dollar will soon lose its hegemony as the primary medium of trade. It has repeatedly been proven that calls for a “peak dollar” were premature. The SWIFT network, which serves as the backbone of the global banking system, and the usage of US dollars as a form of payment were virtually unheard of until quite recently. Because of the dollar’s intrinsic power, President Joe Biden’s use of it to enforce sanctions against Russia this year, and new technology developments, nations are now being encouraged to begin challenging its hegemony. Representatives of the Treasury declined to comment on these circumstances.

“Weaponizing the US currency and the international payment system was a mistake committed by the Biden administration,” “Last week, John Mauldin, a president of Millennium Wave Advisors and a financial analyst with more than three decades of market expertise, published a newsletter published last week. “That will compel nations and non-US investors to diversify their assets outside of the US, which has traditionally served as a haven for them.”

Plans that were already underway in Russia and China to promote their currencies for international transactions, including through the use of blockchain technology, swiftly picked up steam after the invasion of Ukraine. For instance, Russia began demanding payment in rubles for the delivery of electricity.

Along with others, Bangladesh, Kazakhstan, and Laos immediately intensified negotiations with China to boost their use of the yuan. In recent months, India has become increasingly vocal in its support for the internationalization of the rupee, and only last month it started developing a bilateral payment system with the United Arab Emirates.

For such purposes, it was essential that the US and Europe decide to cut off Russia from the SWIFT global financial messaging system. The move, which the French referred to as a “financial nuclear bomb” and cut them off from, compelled the bulk of large Russian banks to rely on their own, much smaller version of the network.

This produced two results. First, concerns that the dollar would more permanently become an overt political weapon intensified as a result of US sanctions against Russia. China in particular shared this concern, but it went beyond just Moscow and Beijing. For instance, India is developing a homegrown payment system that, in some aspects, is similar to SWIFT.

Second, because the US is determined to use the currency as part of a more assertive sort of economic statecraft, economies in Asia are under increased pressure to pick a side. They would be required to follow or apply fines with which they would disagree, which would lead to losing business with significant partners if they didn’t have a backup payment option. This cycle has become more convoluted, according to Taimur Baig, managing director and chief economist of DBS Group Research in Singapore. In light of the situation, regional attempts to reduce reliance on the USD are likely. US sanctions on Russia are pressuring governments around Asia to follow their lead, despite the fact that they would want to preserve relations with both nations and are hesitant to pick a side in the US-China conflict. Sometimes the action has a political or nationalist undertone, especially when it comes to anger of Western attempts to put sanctions on Russia.

Moscow tried to persuade India to choose a different method to keep trade flowing. A spokesperson for the Myanmar government claimed that the dollar was being used “to coerce weaker nations.” And Southeast Asian nations used the incident as justification for increasing their use of local currencies in trade.

“By design, sanctions make it harder for nations and businesses to maintain their neutrality in geopolitical conflicts, “Jonathan Wood, manager of Control Risks’ global risk analysis, stated. “Countries will keep considering economic and strategic alliances.” More than ever, businesses find themselves in the middle of conflicting demands and ever-compliance duties.”

The de-dollarization process is accelerating for many reasons other than simply the sanctions. Asian governments’ attempts at diversification have been more aggressive as a result of the US dollar’s rapid growth.

According to a dollar index published by Bloomberg, the dollar has risen by almost 7% this year, putting it on pace to record its largest annual gain since 2015. As the value of the dollar increased in September, every currency—from the British pound to the Indian rupee—reached new lows. For Asian countries, where food costs have risen, debt repayment obligations have gotten harsher, and poverty levels have gotten worse, the strength of the dollar is a major problem.

As an example, Sri Lanka made its first-ever default on its dollar debt due to a rising dollar that made it impossible for the country to make payments. At one time, Vietnamese officials attributed gasoline supply issues to the dollar’s gain. Therefore, actions like India’s agreement with the UAE accelerate a long-running push to increase the use of the rupee and establish trade settlement agreements without using US dollars. In contrast, non-financial corporations‘ sales of dollar-denominated bonds have fallen to a record-low 37% of the worldwide total in 2022. In many instances during the previous ten years, they have accounted for more than 50% of the debt sold in a single year.

Even if all of these actions might not have much of an immediate market impact, they might eventually cause the demand for the dollar to decline. For instance, the proportions of the Canadian dollar and the Chinese yuan in all currency dealings are already gradually rising. Another aspect aiding efforts to move away from the dollar is technological advancement. 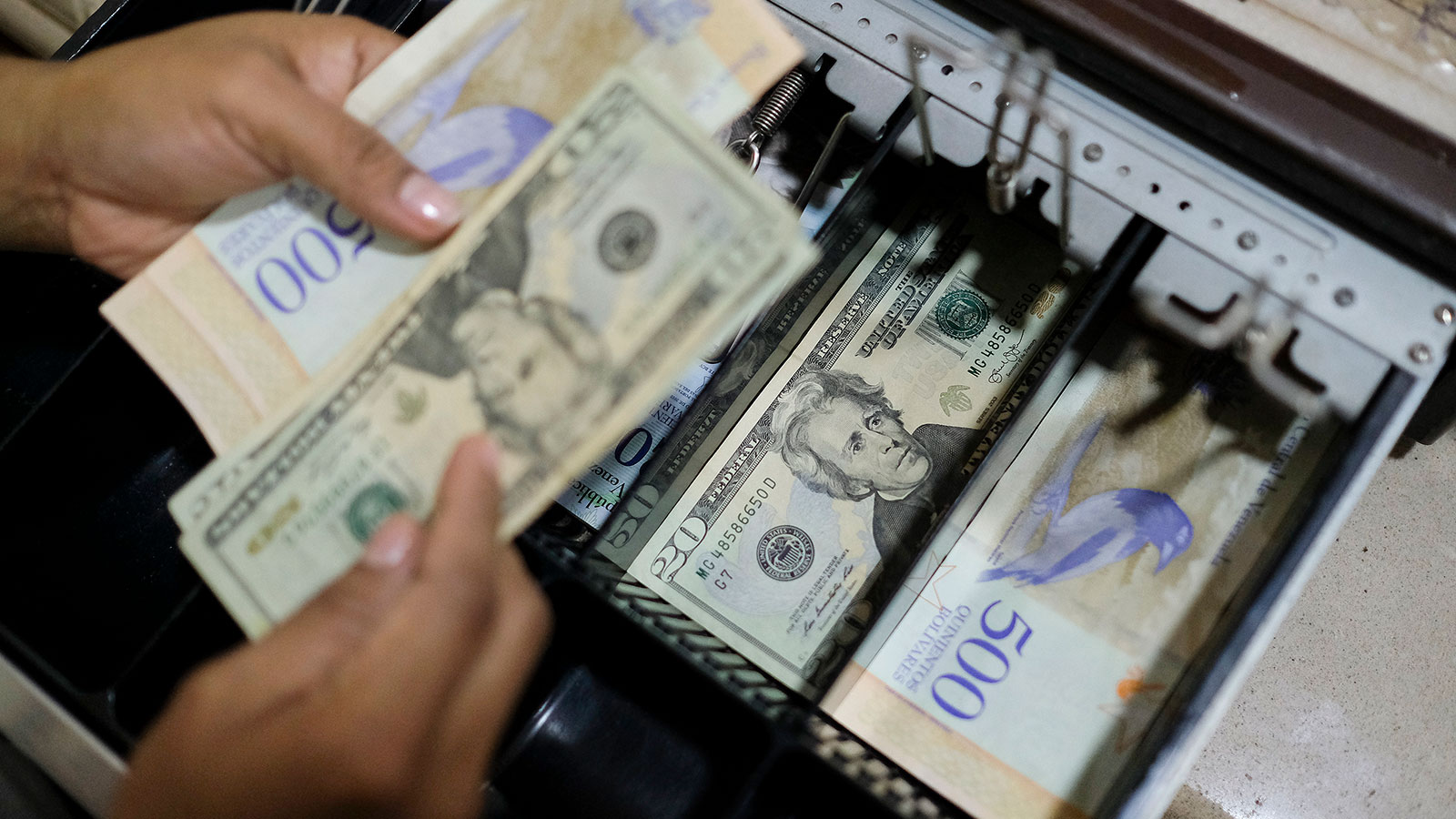 As a byproduct of attempts to establish alternative payment networks—a drive that predates the soaring greenback—several economies are reducing their reliance on the dollar. Thailand, Malaysia, Indonesia, and Singapore have established procedures that allow for local currency exchanges rather than dollar exchanges. Taiwanese citizens have access to a QR code payment system through Japan.

All things considered, the attempts are shifting the momentum farther away from a West-led system that has served as the cornerstone of international finance for more than 50 years. What’s developing is a three-tier system with the dollar remaining very much at the top and growing bilateral payment channels as well as alternate domains like the yuan that aim to capitalize on any possible US overreach.

Despite all the commotion and activity, it seems doubtful that the dollar’s hegemonic status will be threatened very soon. The US economy’s size and strength are undisputed, Treasuries are still among the safest places to keep money, and the dollar makes up the majority of foreign exchange reserves. For instance, even if the renminbi’s percentage of total foreign exchange dealings has increased to 7%, 88% of these trades still contain a dollar component.

“It’s really difficult to compete on the fiat front — we have the Russians mandating the use of rubles, and there is caution with the yuan as well, “added George Boubouras, head of research at Melbourne-based hedge fund K2 Asset Management and a veteran of three decades in the markets. Investors still want liquid assets at the end of the day; therefore the dollar remains the only option in this regard.”

However, the coordinated steps away from the dollar pose a threat to what Valéry Giscard d’Estaing, the then-French Finance Minister, memorably referred to as the “exorbitant privilege” held by the US. He first used the phrase in the 1960s to explain how the US is protected from exchange-rate risk and projects its economic strength thanks to the dominance of the dollar. And they may finally put to the test the entire Bretton Woods paradigm, which was negotiated at a hotel in a small New Hampshire hamlet at the end of World War II and established the dollar as the dominant currency.

According to Homin Lee, Asia macro strategist at Lombard Odier in Hong Kong, whose company manages the equivalent of $66 billion, the most recent initiatives “do imply that the global trade and settlement infrastructure that we’ve been using for decades may be beginning to crack.” “This entire network that was built out of the Bretton Woods system — the Eurodollar market in the 1970s and the financial deregulation and floating rates regime in the 1980s — may be beginning to alter in a more fundamental sense,” Lee added.

The result: Although the King Dollar may continue to rule supreme for many years to come, the growing momentum for the use of other currencies shows no signs of slowing down, especially if geopolitical wild cards continue to persuade leaders to act independently. Ironically, the US government’s readiness to deploy its currency in geopolitical conflicts may make it harder for it to adopt these strategies in the future. At the Bloomberg CEO Forum held last month on the sidelines of the G-20 summit in Bali, Indonesian Finance Minister Sri Mulyani Indrawati remarked, “The war in Ukraine and the sanctions against Russia will serve a very useful lesson.” Many nations believe they may conduct bilateral transactions directly using their domestic currencies, which is beneficial for the world’s much more balanced usage of currencies and payment systems.

See also  Are you a mom looking to build a business? Kickstart your journey from mom to mompreneur with EuroKids MOM.CEO
Tags
dollar india Russia technology UNITED STATES US dollars

How Dangerous Are COVID-19 Conspiracy Theories In Italy?

What Went Wrong With BharatPe In The Last 2 Years?