The date chosen (December 25) drew criticism at the time of its announcement due to the event clashing with Christmas. We look at what Good Governance Day entails, the man whose birthday was chosen to commemorate the event, and some of the criticism it has received in the past.

Atal Bihari Vajpayee was born in Gwalior, Madhya Pradesh, on December 25, 1924. He joined the main Rashtriya Swayamsevak Sangh (RSS) in 1939 as a poet-politician, later becoming a pracharak (full-time worker) in 1947. Because of his literary abilities, he began working on various publications for Sangh Parivar leader Deen Dayal Upadhyaya.

Following Upadhyaya’s death in 1968, he became national president of the Jana Sangh, the RSS’s new political outfit. He was the most eloquent speaker the Hindu right had at the time, and he quickly established himself as a capable administrator as well. In 1975, he was appointed as the External Affairs Minister in Morarji’s post-Emergency government. While that government was quickly deposed (in 1977), Vajpayee received widespread acclaim for his tenure, with his UN General Assembly speech in Hindi receiving widespread acclaim.

Former Jana Sangh members merged to form the BJP in 1980, with Vajpayee as its leader. While the current party initially struggled for electoral success, religious polarisation orchestrated by the party and other Hindu outfits began to make electoral inroads for the BJP by the 1990s.

While governing, Vajpayee expertly straddled the line between hardline Hindutva and moderate Hindu nationalism. During his tenure, India formally became a nuclear power, despite significant Western criticism, faced war and peace with Pakistan, undertook massive public welfare projects such as Sarva Shikshya Abhiyaan and PM Gramin Sadak Yojana, and ushered in a new era of foreign investment and international relations, particularly with the United States.

When Prime Minister Narendra Modi declared the new “Good Governance Day” in 2014, he cited two main reasons. The first was to commemorate the life of Atal Bihari Vajpayee, who was critically ill at the time. Vajpayee was not only a “good governor,” but also one of the BJP’s founding figures and an icon for the party. People remember Atal Vihari Vajpayee on Good Governance Day to pay tribute to him. 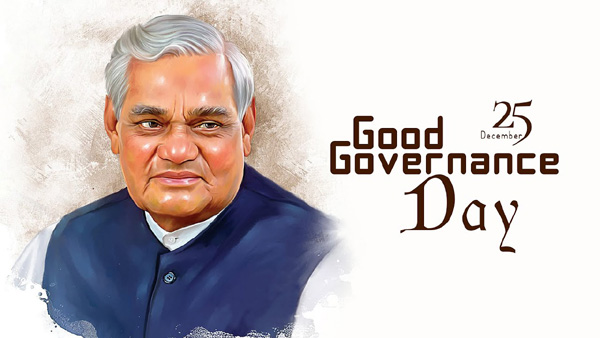 On this day, they are remembered and their contributions are discussed. Seminars are also held at various locations. Seminars provide people with detailed information about their work. Please inform me that the former Prime Minister died in 2018.

Before leaving for the memorial, PM Modi tweeted his condolences to Atal Ji on his Jayanti. He stated that his contribution to India is immeasurable, and that his leadership and vision inspire millions of people.

Atal Bihari Vajpayee’s birthday is celebrated as the ‘Good Governance Day’. Vajpayee was India’s prime minister for three terms, first for 13 days in 1996, then for 13 months from 1998 to 1999, and finally for a full term from 1999 to 2004. He was the first Bharatiya Janata Party leader to be elected Prime Minister of India.

To commemorate the occasion, an all-religious prayer meeting was also organised. Several events are planned to commemorate the occasion. Dr. Jitendra Singh, Minister of State for Personnel, Public Grievances, and Pensions, will launch the revamped Probity Portal, e-HRMS 2.0 Portal, and e-Books on major initiatives and achievements of his Ministry today in New Delhi.

The Minister will also launch the iGoTKarmayogi Portal Mobile Application by Karmayogi Bharat to create a professional, well-trained, and future-ready civil service for India. The iGOTKarmayogi platform is envisioned as a democratised, competency-driven solution space to which all levels of government can gain access in order to improve their execution capabilities.

On October 13, 1999, he became the country’s Prime Minister for the third time. Notably, former Prime Minister Atal Bihari Vajpayee was the first leader to deliver a speech in Hindi at the United Nations. On March 27, 2015, he received the ‘Bharat Ratna’ award.

“Tributes to Atal Ji on his Jayanti,” PM Modi tweeted today. His impact on India is immeasurable. Millions of people are inspired by his leadership and vision.” “Atalji was a visionary reformer who accelerated all-round development,” former Vice President Venkiah Naidu said. The second goal was to use the day to raise public awareness of government services and accountability, as well as to instil “good governance” as a habit in civil servants. The day is observed to ensure that residents of the country are treated fairly by the government and receive benefits from various government services.

In this regard, a major push was made to promote “e-Governance,” with the official slogan for the event being “Good Governance through e-Governance.” “Highlighting the key achievements and also activities of the ministry that have played an instrumental role in furthering the cause of Good Governance… (and) also showcasing of technologies and solutions by the government and the industry, instrumental in the Digital India programme,” according to the Good Governance Day Report published in 2014 by the current Ministry of Communication and Information Technology, are two critical objectives for the day.

On this occasion, the government launched the Good Governance Index in 2019. The GGI is a great scientifically prepared tool based on various good governance parameters that assesses the level of any state at any given point in time and aids in shaping future development.

There was some dissatisfaction because Good Governance Day clashed with Christmas, with some claiming that the BJP deliberately chose the day to overshadow Christmas celebrations. They were particularly critical of the day being turned into a working day for public servants, with numerous functions planned that would necessitate their attendance.

In response, the government diplomatically declared December 25 to be a “voluntary exercise,” allowing those who wish to stay at home and celebrate Christmas to do so.

In his speeches on Good Governance Day, Narendra Modi has frequently invoked Jesus Christ. Modi said today on Man ki Baat that “it is a day to remember the life and teaching of Jesus Christ.”

What is Scotland’s new gender recognition Bill, that the UK govt might block?

A Chinese city reports 5 lakh cases of COVID daily and expects that number to treble around New Year's Day.