China’s strict zero-Covid policy has recently been met with waves of protests in cities all over the country. The movement is frequently referred to as the “white paper revolution” and is no longer restricted to China. This is due to the blank white A4-sized sheets of paper that many protesters have been photographed holding.

Many of the demonstrators have demanded Xi Jinping’s resignation as president of China and the overthrow of the Chinese Communist Party. These kinds of large-scale protests are uncommon in China, where opposition is typically quickly put down.

First, though, why are there protests in China?

In Urumqi, Xinjiang, which had been placed under lockdown for roughly 100 days, a building fire in November claimed the lives of at least 10 people. The deaths were attributed to China’s brutal lockdown. Protests started in Xinjiang and later spread to Shanghai, Chengdu, Wuhan, Lanzhou, and Nanjing after a Chinese official appeared to blame the locals for the incident.

On Tuesday, November 29, 2022, at Harvard University in Cambridge, dozens of students and faculty protested against China’s strict anti-virus regulations.
China’s strict zero-Covid policy has recently been met with waves of protests in cities all over the country. The movement is frequently referred to as the “white paper revolution” and is no longer restricted to China. This is due to the blank white A4-sized sheets of paper that many protesters have been photographed holding.

Many of the demonstrators have demanded Xi Jinping’s resignation as president of China and the overthrow of the Chinese Communist Party. These kinds of large-scale protests are uncommon in China, where opposition is typically quickly put down. 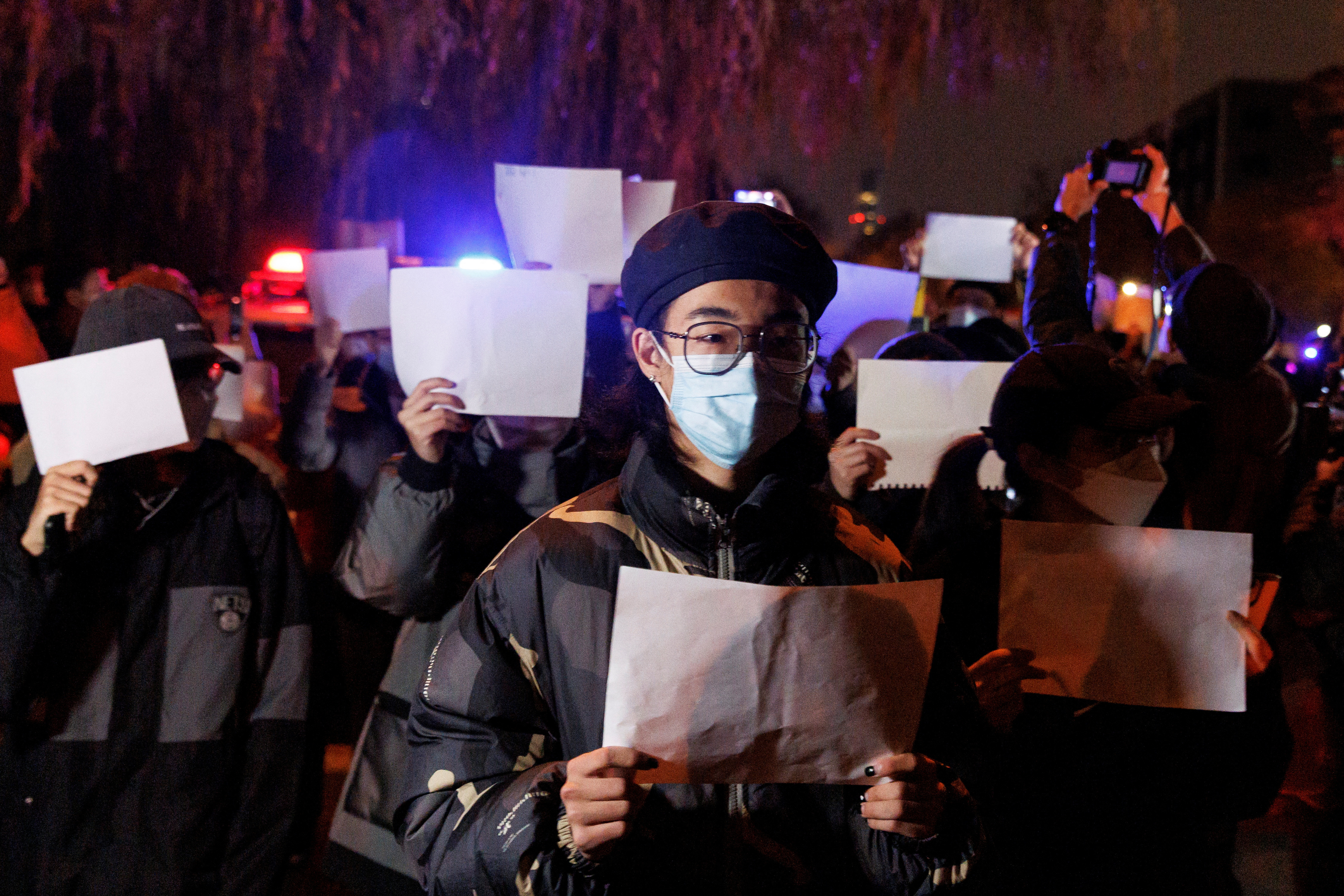 Why do protesters use white paper as a form of protest?

The plain white sheet of paper evolved into a protest symbol over the course of several weeks. It now serves as a metaphor for the absence of free speech in the nation.

In 2020, white papers were used in Hong Kong as a symbol of protest to avoid using phrases that were forbidden by the city’s new national security law. They have also been used by protesters in Moscow this year to denounce Russia’s conflict with Ukraine, according to Reuters.

Holding up the blank pieces of paper in silent protest, students at universities in cities like Nanjing and Beijing are using a strategy common in the nation to avoid censorship or arrest.

According to a New York Times report, white is a traditional funeral colour in China, and protesters are also using it to honour those who have died during the demonstrations.

What is the global trend of the protests?

After the protests spread across the country, the hashtag “A4Revolution,” which is a reference to the paper’s size, started trending on Twitter.

In support of the Chinese protesters, Instagram and Facebook users from all over the world soon began to change their profile pictures to blank pieces of paper, according to The New York Times.

Users are expressing their support for one another by posting photos of themselves holding blank pieces of paper or blank squares on WeChat and Weibo, the country’s state-run social media platforms. The hashtag “white paper exercise” was also blocked on Weibo due to the movement’s widespread influence, which led users to complain about the censorship. Weibo user: “If you fear a new blank sheet of paper, you are weak inside,” according to Reuters.

President Joe Biden’s latest challenge in balancing an embrace of current democracy with the need to prevent a relationship with an autocratic country from rupturing is the unexpected eruption of all protests in China over COVID-19 lockdowns.

The scenes of Chinese citizens criticising the nation’s zero-COVID policies and the resurgence of widespread censorship prompted a cautious response from the White House on Monday.

The administration’s only statement read: “We’ve said everyone has the right to the peacefully protest, in the United States and around the world.” John F. Kirby, a spokesperson for the current National Security Council, repeated it almost word for word in the White House press room.

Kirby, a former press secretary for the State Department and the Pentagon who has dealt with similar inquiries numerous times, told reporters who pressed him for a more definitive response, “The president is also not going to speak for protesters around the world.” They are expressing themselves.

The declaration stood in stark contrast to the repeated criticisms of Iranian authorities for their months-long efforts to quell anti-government demonstrations, particularly their enforcement of laws requiring all women to mainly cover their heads with a hijab.

However, administration officials claimed that the circumstances were not comparable, that they had their doubts about the viability of the protests that also took place over the weekend in Beijing and Shanghai, and that the demands for the lifting of COVID-19 restrictions did not amount to a fundamental call for political change. The officials discussed sensitive decisions under the condition of anonymity.

Instead of focusing on any police response to the protests, the administration concentrated on the substance of China’s COVID-19 containment policies.

In a statement, the White House stated that the United States is not pursuing a zero-COVID policy. And as we’ve previously stated, we believe the People’s Republic of China will find it very challenging to contain this virus using their zero-COVID strategy.

For us, focusing on what works means utilising public health tools, such as urging Americans to receive their updated vaccine and facilitating easy access to testing and treatment.

It is difficult to mainly determine how loudly to support the protesters. Biden has claimed that the rivalry with China is the first instance of what he refers to as a conflict between “autocracy and democracy,” and he has vowed to denounce human rights violations committed by authoritarian regimes all over the world.

However, any support for the street demonstrations would almost certainly be interpreted in Beijing as an attempt to topple Chinese President Xi Jinping, especially after the two met for a 3-and-a-half-hour meeting in Bali earlier this month.

The Chinese government has already charged that the United States is pursuing a “containment” policy by restricting China’s access to American markets for Chinese communications equipment and limiting China’s ability to import machinery for semiconductor production.

The Chinese telecom giant Huawei was officially prohibited by the Federal Communications Commission on Friday from selling almost all of its new 5G cellular communications equipment in the United States due to national security concerns.

However, administration officials assert that they see a difference between prohibiting goods that might aid the Chinese military and attempting to undermine China’s domestic political system.

The White House wants to pick its battles wisely at a time when Biden is urging China to maintain its restraint in aiding Russia in its conflict with Ukraine and to resume cooperation on climate change, North Korea, and other issues that Washington and Beijing used to regularly discuss.

There is also concern that giving the protests even a rhetorical appearance of support could fuel more mistrust.

According to Robert Daly, the director of the Kissinger Institute on China and the United States at the Wilson Center in Washington, “the risk of exaggerating the current scope of the protests is that American media will lend credence to Chinese government claims that all these tentative, spontaneous demonstrations are the result of a foreign plot.” Beijing will use the claim that protesters are taking part in a colour revolution to intimidate them.

Daly observed that it was unclear what the protests were about. He declared, “This is not yet a revolution or a movement, and it probably won’t become one.”

He pointed out that there were actually no protests on Monday and that the protesters mainly wanted “the freedom to live each and everyday life that they had before COVID.” Although there were calls for Xi and the party to resign during demonstrations in Shanghai, he claimed that they were very small in number.

The White House sidestepped the other aspect of the demonstrations, in which blank sheets of paper were held up, by focusing on the protests’ immediate causes, the COVID-19 restrictions. It was a method of getting around legislation that forbids pro-democracy cries and labels some of them as sedition.

Biden has encountered similar challenging issues a year after asserting that the conflict between democracies and autocracies is the main issue of this era.

During a visit to Saudi Arabia in the summer, the president gave Crown Prince Mohammed bin Salman a fist bump in an effort to mend fences with the nation he once dubbed a “pariah” state.

The administration believed it had quietly agreed with the Saudis to increase their oil output this fall. Instead, OPEC members, including Saudi Arabia, announced a reduction in production, prompting a enraged Biden to declare that he was initiating a new review of the partnership. That evaluation is still in progress.

Kirby only stated that “the president is staying briefed on what is going on” in regards to China.