In comparison to its September prediction of 7.3%, S&P Global Ratings reduced India’s main economic growth forecast for the main fiscal year to 7% on Monday. The domestic demand-led economy, on the other hand, will be less affected by the global slowdown, it was claimed.

“Economies that are driven by domestic demand, like those in India, Indonesia, and the Philippines, will be less affected by the global slowdown. According to our projections, India’s output will increase by 7% in the fiscal year 2022-2023 (which ends in March 2023) and by 6% in the following fiscal year, said Louis Kuijs, chief economist for Asia-Pacific at S&P Global Ratings. According to S&P, India’s economy expanded by 8.7% in 2021. S&P claims that some countries need to advance their domestic demand recovery from COVID; this should support India’s growth in the ensuing year. It forecast that the inflation rate for the current fiscal year would be 6.8% on average, that the RBI’s benchmark interest rate would rise to 6.25 percent by March 2023, and that it would decline to 5% by 2024.

The RBI has already raised the interest rate by 1.9 percentage points, to a three-year high of 5.9 percent. India’s wholesale and retail inflation decreased in October after remaining high for the majority of the year, primarily as a result of supply chain problems brought on by the start of the Russia-Ukraine war in February. Retail or CPI inflation fell to a 3-month low of 6.7% last month, while wholesale or WPI inflation hit a 19-month low of 8.39 percent.

In light of the weaker rupee and rising oil prices, Moody’s had stated that the downward revision “assumes more higher inflation, high interest rates, and also slowing global growth will dampen all economic momentum by even more than we had previously expected.”

Even after accounting for valuation changes, foreign reserves in Asian emerging markets have decreased, according to S&P. By the end of March, it predicted that the exchange rate would be Rs 79.50 to a dollar, and down from the current Rs 81.77 to a dollar.

“In India, losses attributable to valuation changes (of $ 30 billion) were far and above losses in foreign reserves of $ 73 billion through August. This suggests that the central bank has intervened significantly to support the rupee, it said.

S&P stated that while China’s growth is likely to remain muted in the upcoming months as the government eases its current COVID stance and also the property market stabilizes, it should pick up in 2023. Although S&P generally anticipates GDP growth to remain healthy, lower global growth and also higher interest rates should even slow other Asia-Pacific economies next year, Kuijs said.

Some central banks will need to raise rates more than inflationary concerns call for due to significant interest rate hikes in the US and deteriorating current account positions in a number of nations, it warned.

India’s GDP growth rate for Q2 FY23 has been estimated by SBI Ecowrap at 5.8%, a significant decrease from the RBI’s estimate of 6.3%. The research report, which was published late on Monday, also stated that there are significant uncertainties surrounding this growth. 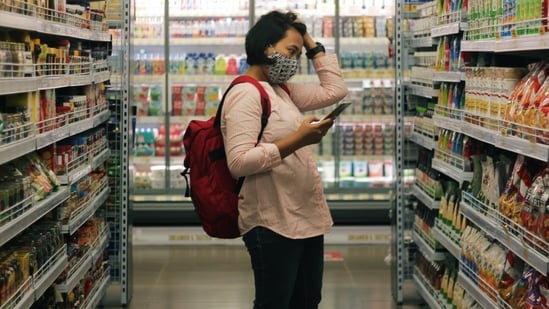 The market’s consensus regarding the Q2 GDP figures that will be announced on November 30 is very different. The estimated average is 6.1%. The report, which uses a new model to predict how the economy is growing, with a lag, said that a range of 5.6%-6% is preferable to a point estimate.

“Overall, a sub-6% growth, if it occurs in Q2, could mean that India’s growth was less than the benchmark of 7%.

However, since the start of the pandemic, there appears to be a significant disconnect between leading indicators and GDP growth. Growth impulses are still strong, so it might be best to wait a few quarters to draw firm conclusions about the growth trajectory from the GDP headline numbers, according to SBI Ecowrap.

In contrast to ICRA’s Q2 growth forecasts, which were released on November 21, SBI’s commentary places Q2 growth at 6.5%, which is half of Q1’s growth but also higher than RBI estimates.

Even though the first quarter of FY23 showed double digit growth at 13.5%, it fell short of expectations, forcing many agencies to revise their annual projections. In addition to SBI and Citibank, the RBI also revised its annual growth projections, which prompted many other agencies to do the same.

Standard & Poor’s, a ratings agency, revised its earlier estimate of India’s FY23 GDP growth from 7.3% to 7% on Monday. Despite decreasing from 7.3% to 7%, CRISIL’s estimates are still over a week ahead of S&P’s. Additionally, CRISIL anticipates a further 6% growth slowdown in FY24.

Export data provides an early indication of India’s growth rate. According to the Commerce Ministry, India’s exports for the month of October decreased by 16.6% to $29.78 billion from the same period last year due to the global slowdown. India’s trade deficit widened as imports increased by 5.5%.

According to Goldman Sachs, S&P 2023 will be harder.

According to Goldman Sachs, who provides estimates for calendar years rather than fiscal years, growth will slow down in 2023. Prior to a few weeks, it reduced the forecast for GDP growth to 5.9% in 2019 from 6.9% in 2022.

According to Goldman Sachs, the waning effects of the post-Covid reopening will have an impact on India’s growth momentum, as will higher borrowing costs.

“Growth will probably have two halves, with the first half being slower as the reopening boost wanes and domestic demand is weighed down by monetary tightening.

According to Goldman Sachs, according to a Bloomberg report, “growth is likely to re-accelerate in the second half as global growth recovers, drag from net exports diminishes, and investment cycle picks up.”

According to Goldman Sachs, the global economy will expand at a 1.8% rate as US resilience contrasts with a recession in Europe and a rocky reopening in China. According to a redacted version of a Goldman Sachs report released on November 16, “Global growth slowed through 2022 on a diminishing reopening boost, fiscal and monetary tightening, China’s COvid restrictions and property slump, and the Russia-Ukraine war.”

In the second week of November, Moody’s also decreased its forecast for India’s GDP growth for 2022 from 7.7% to 7%. The rating agency has cited a slowing global economy, high interest rates, and rising inflation as the causes of the situation.

However, Moody’s estimated India’s GDP growth rate for 2023 to be 4.8%, which is significantly less than what Goldman Sachs predicted.