The large percentage of Indian migrants earning relatively very high salaries in the United States, and United Kingdom and East Asia is expected to support a 4% increase in remittances to India.

According to the World Bank, our country will be the top recipient of remittances in 2022 and is predicted to receive a record $100 billion in remittances. According to the World Bank’s Migration and Development Brief, our country’s remittances will increase by 12.5% from 7.5% last year, resulting in a $100 billion flow as opposed to $89.4 billion in 2021. It credited the achievement to the substantial number of Indian immigrants who made relatively very high salaries in the US, the UK, and East Asia.

However, the report has noted that “Our country’s remittance flows are also expected to account for moreover only 3% of its GDP in 2022, despite reaching a current historic milestone at $100 billion and maintaining its position as the main top recipient of remittances globally.”

The World Bank forecasts that remittance flows to South Asia this year will increase by 3.5% to reach $163 billion in 2022, driven by robust performances in India and Nepal. However, compared to the 6.7% increase in 2021, this is a slowdown, reflecting “the impact of a combination of external global shocks (inflation, slowing demand) in both source and destination countries as well as domestic factors.”

The report states that the disparity in individual country results is reflected in the South Asian region’s overall remittance growth. While India has increased by 12% and Nepal by 4%, other countries have reported an overall decline of 10%.

According to the report, remittances to low- and middle-income countries will increase by 5% to $626 billion in 2022 despite global challenges.

So why are remittances to India this year so high?

The World Bank claims that there has been a “gradual shift in the destinations” for Indian migrants, helped by a “structural shift in qualifications” that allowed them to enter the “highest-income-earner-category,”, particularly in the services sector. 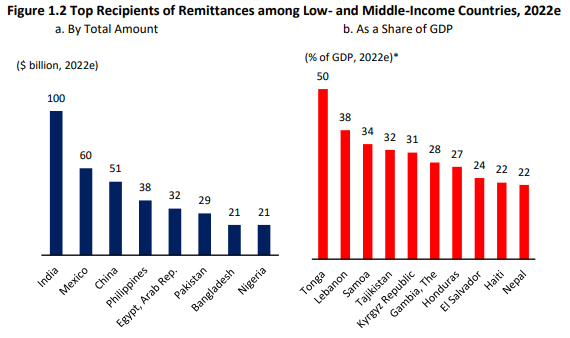 According to the World Bank, “higher education mapped on to mere high income levels with direct implications for current remittance flows.” In the Gulf Cooperation Council (GCC) nations, migrants “moved from largely low-skilled, informal employment to a dominant share of high-skilled jobs in current high-income countries such as the country United States, the United Kingdom, and also East Asia (Singapore, Japan, Australia, and New Zealand).”

The report claimed that during the Covid-19 pandemic, Indian migrants in current high-income countries benefited from work-from-home opportunities and sizable fiscal stimulus programmes. Despite high global inflation, wage increases and “record-high employment conditions” enabled migrants to send money home as the pandemic subsided, according to the report.

“Price support policies had kept inflation at bay… and also demand for various labour increased with higher oil prices, which in return increased remittances for Indian labourers,” according to one study, despite the fact that Indian migrants in the Gulf Cooperation Council returned to India during the pandemic.

Remittances to our country were boosted by wage increases and a robust labour market in the US and also other OECD (Organisation for Economic Co-operation and Development) nations, according to the report. In the GCC destination countries, governments made sure there was little inflation by implementing direct support policies that protected migrants’ ability to remit.

According to the brief, the depreciation of the recent Indian rupee against the US dollar—which fell 10% between January and September 2022—may have benefited Indian migrants and increased remittance flows.

In 2022, travel and vaccinations helped migrants get back to work, which increased remittances to the nation.

It is “the sum of worker’s remittances, employee compensation, and migrants’ transfers as currently recorded in the IMF Balance of Payments, where workers remittances are main current transfers by many migrants who are considered residents in the source,” according to the World Bank. 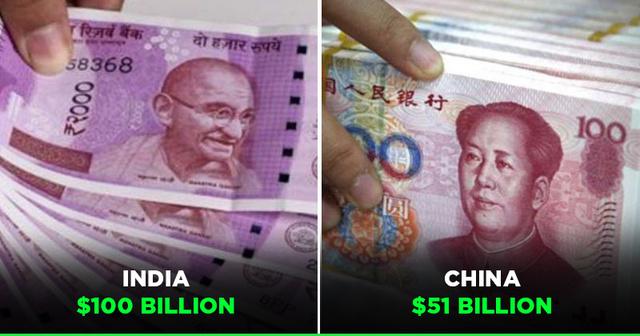 For low- and middle-income countries, remittances are a crucial source of household income.

What is anticipated for global remittances in 2023?

“The year will also stand as a test for the current resilience of remittances from white-collar South Asian migrants in the high-income countries,” the report notes. “The growth of current remittance flows into South Asia in 2023 is expected to slow to 0.7%.”

The report states that a decline in economic growth in the GCC coupled with a drop in oil prices will further pull remittance flows down to all South Asian countries. Remittance flows to India specifically are predicted to decrease due to inflation and a slowdown in the US economy.

Money transfers from non-resident Indians (NRIs) employed outside of India to family, friends, or other relatives living in India are known as remittances, and they are a crucial source of income for households.

The Migration and Development Brief’s key points are:

Even though they have reached a historic high, our country’s remittances are predicted to make up just 3% of its GDP in 2022.

Why there are so many remittances to India:

Shifting to the highest-income-earner category, a structural shift in qualifications, and a gradual change in the destinations for Indian migrants.

For instance, migrants moved from low-wage jobs in the Gulf Cooperation Council (GCC) nations to high-income nations like the US, the UK, and East Asia (Singapore, Japan, Australia, New Zealand). 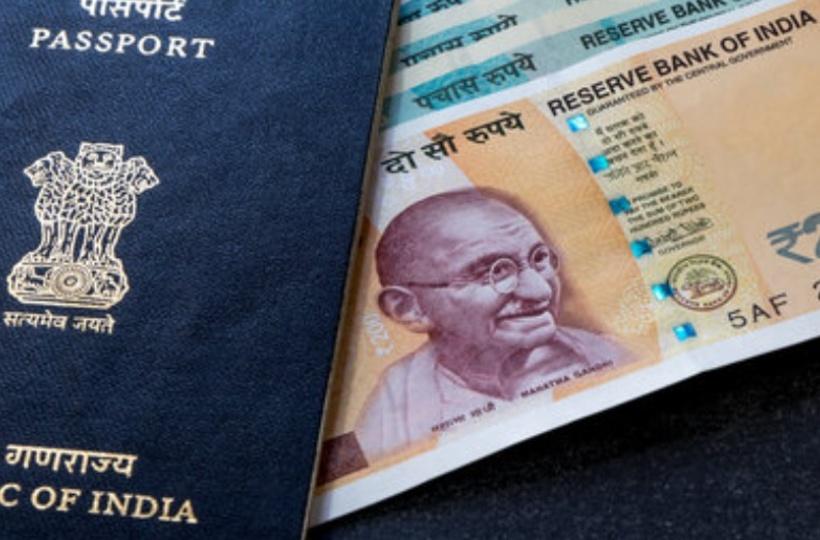 OECD countries and the US both have robust labour markets.

Low inflation, high labour demand, and higher oil prices in the GCC all contributed to an increase in remittances for Indian labourers.

When Covid-19 was in widespread use:

Indian immigrants in wealthy nations benefited from work-from-home opportunities and sizable fiscal stimulus packages, which were followed by pay increases as the pandemic subsided.

The resumption of travel in 2022 and vaccinations helped migrants find employment.

Remittance flows might have increased as a result of the Indian rupee’s depreciation against the US dollar.

Because of inflation and the US economy’s slowdown, remittances are expected to decline in India.

Remittance flows to all South Asian nations will decrease even further as a result of the GCC’s slowing economic growth and the drop in oil prices.

Change in migration patterns from India

The number of people who renounced their Indian citizenship reached 8,81,254 between January 2015 and September 2021. Following the pandemic, the trend picked up speed as countries like Canada, New Zealand, Germany, and Ireland loosened their immigration regulations in an effort to attract skilled workers.

Earlier, such relocation occurred from the Arabian Gulf to developed nations like the US and UK for high-skilled jobs, leaving the Arabian Gulf for frequently low-skilled and informal employment.

Due to significant stimulus packages and wage increases in our country during and after the pandemic, the US overtook other countries as the largest sender of money to that country in 2020–21.

The structural change in requirements and destinations, particularly in the service sector, “has accelerated growth in remittances tied to high-salary jobs,” the report stated.

Describe the Indian government's new program for the digital rupee.

Why China’s plans to move its UK embassy to historic Royal Mint Court sparked a row?