The board of food aggregator Zomato has given the go-ahead for the acquisition of fast-growing e-commerce company Blinkit in an all-stock deal for a total purchase price of Rs 4,447 crore. The decision is made as Zomato prepares for 10-minute delivery. It stated that “Zomato Instant” was already running smoothly in Gurugram. The definition of dark stores and how they will support Zomato’s 10-minute delivery schedule are provided below.

Through its network of warehouses and scattered dark stores, Blinkit has access to the inventory held by third-party distributors and merchants, who maintain around 4,000 stock-keeping units (SKUs) across a range of product categories. Blinkit still has roughly 400 dark stores as of May 2022, after closing a number of them recently to reduce losses. 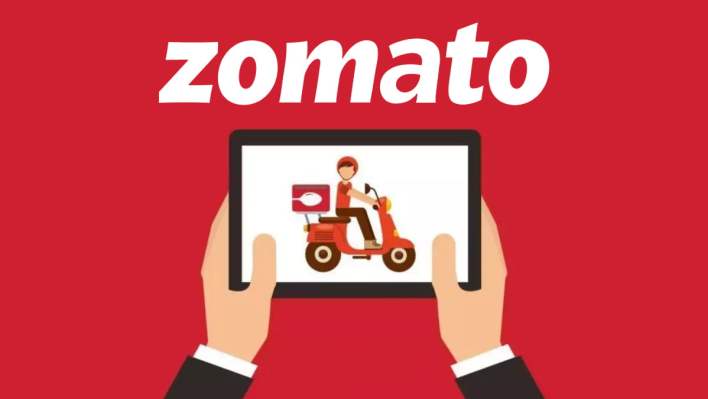 In 2008, Deepinder Goyal and Pankaj Chaddah, two Delhi IIT graduates, established Zomato. Zomato was known as “Foodiebay” up to November 2010. They then noticed their coworkers looking through menus from several eateries to place an order. At that point, they had the bright notion of creating digital versions of these manual menus. Zomato began to disclose the number of restaurants available in the market in 2012, after having grown globally.

Zomato established a solid foothold in the industry before UrbanSpoon entered it. It is now active in 22 countries, has more than one million eateries worldwide, and processes 1.25 million daily orders. A dedicated group of food soldiers from Zomato also visit each restaurant to reassure them that their data is secure. Users can write stories based on their eating experiences, offer reviews, and express their thoughts.

Zomato has become more social thanks to this project. One of the reasons why people like to purchase food online is Zomato’s user-friendly app. 22 countries, including Australia and New Zealand, have more than a million users. Zomato now makes it simple for consumers to order food on their mobile devices and deliver it to their location. 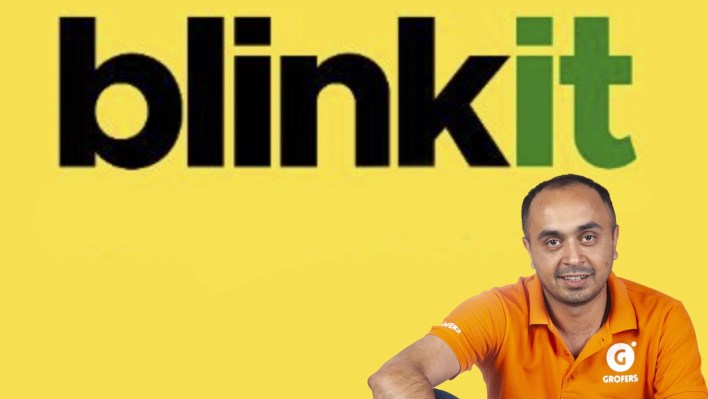 An Indian rapid delivery business called Blinkit (formerly known as Grofers). It is headquartered in Gurgaon and was established in December 2013.

Customers of the business can place online orders for groceries and other necessities using a smartphone application. The personnel of Blinkit then take possession of the things in their warehouse and deliver them within 10 minutes to the customer. The organisation was fulfilling 1.25 lakh orders every day by November 2021. More than 30 Indian cities already use Blinkit. By 2021, investors such as SoftBank, Tiger Global, and Sequoia Capital had contributed around 630 million US dollars to the startup.

What Are Dark Stores?

A dark store serves as a small-scale facility for fulfilling internet orders. A retail distribution facility or warehouse caters primarily to online shoppers. Quick commerce services like Blinkit and Swiggy Instamart, which guarantee to deliver groceries to consumers within 15 to 20 minutes, rely on a dark store as their lifeline.

These dark establishments, which are often located near where a customer orders, attract a number of workers. The shops are essentially neighbourhood shops without customers. When a customer places an order, a member of the dark store staff selects, packs, and ships the items that are currently in stock to the customer’s specified address.

“Many dark outlets are already going towards contribution break-even,” said Akshant Goyal, the chief financial officer of Zomato. After the merger, the path to profitability should only quicken with sustained strong execution and the realisation of synergies with Zomato. Within the next year or two, a sizable portion of the dark stores should achieve contribution break-even. How quickly we grow and how many new dark stores we open will affect overall profitability.

How Will They Help In Zomato’s 10-Minute Delivery?

According to Zomato, Gurugram is on pace for the 10-Minute Delivery system. However, according to media sources, during the platform’s pilot in Gurugram, not all orders were delivered on time.

Zomato CEO Deepinder Goyal on Friday said: “Time optimisation never takes place while driving but rather in the supply chain and at dark storefronts. A network of dense dark businesses that serve clients who are barely 1-2 kilometres distant is essential to delivering goods quickly. This translates to an average bike speed of 20 kmph and trip duration of 7-9 minutes across shorter, clearly defined routes.”

Regarding the Blinkit acquisition, Akshant claimed that rapid commerce broadens the market that can be served, raises the possible profit margin, and strengthens the viability of the company. The peak times for ordering food coincide with the times when rapid commerce demand is highest. “This will help increase our hyperlocal delivery fleet utilisation and reduce the delivery cost.”

Success in quick commerce is heavily dependent on an efficient hyperlocal delivery network.

Deepinder said, “A successful hyperlocal delivery network strongly depends on success in rapid commerce. Given the millions of food orders we deliver, Zomato has a natural edge in this situation. Despite this, fast commerce cannot succeed based on hyperlocal delivery alone. That’s where Blinkit steps in with its in-depth knowledge of the product-supply chains, which include warehousing, the transfer of goods from warehouses to dark stores, the observation of inventory kept in numerous locations, and the optimisation of order picking and packing, among other things.”

Additionally, Blinkit makes it easier for customers to receive things from dark establishments in the last mile. A dark store often has a delivery radius of fewer than 2 kilometres, allowing for prompt product delivery. 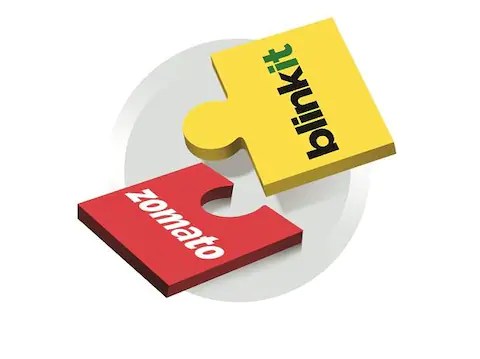 The target company’s management team, including co-founder and CEO Albinder Dhindsa, will remain in place, while Blinkit owners would receive a cumulative investment in Zomato of 6.88 percent.

However, concerns remain regarding how Zomato, a business that reported losses of Rs 1,223 crore in FY22, intends to benefit from the acquisition of yet another loss-making delivery startup.

The top executives of the big food delivery company published a ready reckoner explaining the reasoning behind the transaction. Here are some of the key justifications that emerged from what they stated, ranging from having a Blinkit button on the Zomato app to pooling delivery fleets to reduce costs:

According to Zomato CEO and co-founder Deepinder Goyal, “Quick commerce will help us raise the customer wallet share spent on our platform and drive increased frequency and engagement from our customers.”

According to Zomato’s data, Blinkit’s average order value in May was more than 25% more than the company’s own Rs 398 in FY22.

The company stated: “After the deal closes, we’ll start experimenting with different ideas we have to see which ones work, including putting the Blinkit tab on the Zomato app.

Blinkit will continue to run its business through its app and brand, according to Zomato, but CFO Akshant Goyal said that they might pool delivery fleets to some extent.

According to him, “Quick commerce broadens our target market, expands the possible profit pool, and strengthens the viability of our enterprise. The peak times for food delivery demand complement the peak moments for quick commerce.”

Given the shorter delivery time and a greater number of items fulfilled per hour in rapid commerce, the last-mile delivery cost is also anticipated to be cheaper than food delivery.

Blinkit will continue to run its business through its own app and brand, according to Zomato, but CFO Akshant Goyal said that they might pool delivery fleets to some extent.

According to him, “Quick commerce broadens our target market, expands the possible profit pool, and strengthens the viability of our enterprise. The peak times for food delivery demand complement the peak moments for quick commerce.”

Given the shorter delivery time and a greater number of items fulfilled per hour in rapid commerce, the last-mile delivery cost is also anticipated to be cheaper than food delivery.

According to Deepinder Goyal, co-founder and CEO of Zomato, “Blinkit’s GOV (gross order value) is quickly catching up with Zomato’s GOV in some important markets, indicating that swift commerce will add a significant new addressable market to our business in the long run.”

“Blinkit GOV already accounts for about 63 per cent of Zomato’s food delivery GOV in a sample market like Gurugram”, he continued.

Blinkit did, however, attain a GOV of Rs 403 crore in May 2022, which was around a sixth of Zomato’s monthly average GOV for food delivery in Q4FY22.

While users’ tendency to order immediately after opening the app increased by 2.4 times following the pivot, the typical customer’s ordering frequency climbed by 1.5 times.

In May 2022, the Blinkit app had 3.5 times as many monthly orders as Zomato’s meal delivery service, according to the business.

“Contrary to popular belief, subsidies are not the only reason for improving customer-facing KPIs. In actuality, vendors are already giving less of a discount to customers than they were under the previous next-day delivery model,” said the CEO.

He continued, “There is also a levy of the delivery charge, which was not always the case earlier.”

The unit economics of Blinkit continue to be problematic. Even with a reasonable assessment, the company still lost about Rs 132 per order in May even though their contribution margin loss decreased from negative 55 per cent to negative 16 per cent.

According to Zomato, Blinkit has closed over 50 dark locations since January. The company plans to keep closing underperforming stores to reduce losses going forward.

“We are confident that Blinkit is headed in the right direction because of the improvement in unit economics over the past five months. The numerous levers for achieving profitability in this business are well visible to us. Many dark stores are already moving toward contribution break-even,” said CFO Akshant Goyal.

Social ecommerce unicorn DealShare's FY21 Loss was up 134% to INR 67 Cr because of Expenditure Surge.