Under Kaul’s direction, Domino’s Pizza quick-service restaurants (QSR) went from 90 to 1,100. It was when Jubilant’s revenue was growing at a rate of 30% a year for five years. Seeing this growth, Kaul opened a lot of stores. When news came out that he was leaving, his stock went down. For a short time, though.

When Pratik Pota became CEO, he kept going in the same direction as Kaul. But there was one big difference: For him, it was essential to make more money, with a particular focus on delivery costs. SSSG under Pota grew from 1% in FY14-FY17 to 9%-10% in FY18-20. This is a lot better than the 0% growth in FY14-FY17. Even margins and profits went up.

It was 2022, and Jubilant felt like she was back in the same place again.

Mr. Pota was chosen as the CEO candidate to replace Mr. Ajay Kaul, who had a weak SSSG (same-store sales growth) and weak margin performance for Jubilant FoodWorks, a research analyst at a share-trading company said in a report. During Pota’s time, the company’s revenue, operating profit, and net profit all grew at 11.1 percent, 35.8 percent, and 45.8 percent over five years, he told the story. This was a time when the pandemic lasted more than 18 months. 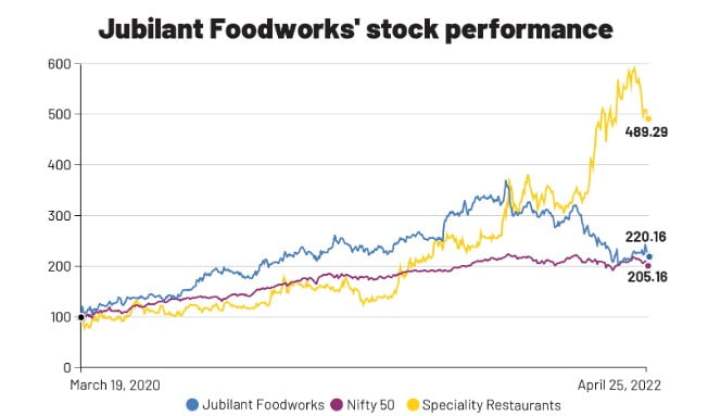 The food-tech companies and quick-service restaurants like Domino’s were best positioned to serve people who worked from home or families who couldn’t go out to eat because of Covid-19. During this time, the share of Jubilant FoodWorks more than tripled, thanks to sales made by delivering food to people. But there were only a few positives. As the pandemic went away, so did the growth.

A shift is taking place from delivering food to eating in, but it’s only for a short time. People are more likely to choose brands that offer a better dine-in experience or atmosphere than delivery-focused brands like Domino‘s.” This hurts Domino’s ADS (average daily sales) and is likely to keep going for the next few quarters, says Ashish Kanodia, an analyst (consumer discretionary) at Ambit Capital. “Revenge outings will keep going,” he says. It could hurt Domino’s market share if Pizza Hut speeds up the rate at which it opens new stores, says Kanodia. This could keep volumes down for a long time, he says.

Domino’s hasn’t slowed down its store-opening spree because it wants to focus on delivery-based income in the future. A lot of money has been put into this idea for a long time, and after the pandemic, it has become more confident in it. On the other hand, analysts are worried that average daily sales are going down.

See also  A $10 billion windfall: Why rice is going to pay off handsomely for India

There are many things to worry about, like high inflation, high employee costs, and the growth of Jubilant’s QSR subsidiaries, Hong’s Kitchen, and Popeyes. The stock has gone down and is still not doing as well as the rest of the market. FPIs have sold some of the stores, but mutual funds and private investors have bought more, so their market share has grown. 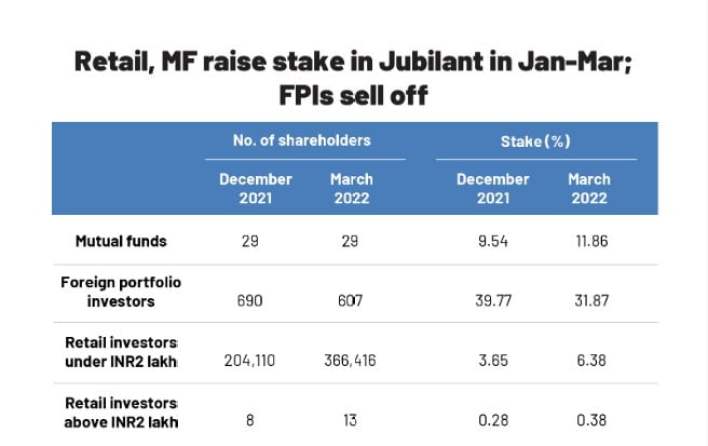 At the end of Pota’s time in charge, the return on equity (ROE) rose to 24.5 percent in 2019. This was the highest since 31 percent in FY13 when it was the highest. Even during the pandemic, Domino’s was able to stay strong because of its delivery business. Last two years, it hit a record high. As the pandemic went away and the economy grew again, the stock fell.

During the last year, the shares of Jubilant have lost 25%, while the Nifty 50 has lost 2.4%. However, price-to-earnings data from the previous ten years shows that Jubilant FoodWorks is now trading at an attractive PE of about 85x, compared to a high of 269x it reached in January of last year. This is a lot better than the high of 269x it came in January of last year. There are two ways to look at this:

Most analysts think the company will make more money in FY22 than it has ever made in a year. As of December, the company had made INR3,200 crore in revenue, more than April-December 2019’s revenue of INR3,036 crore. Analysts say that the operating margin will get better, and the same-store sales growth is also going to get better.

But now, the bet will be on Jubilant Foods beyond FY22 and whether the new CEO can lead the company to the goals set in 2019. How quickly can Jubilant get back on its feet?

The strategy for a fortress

“Build a Domino’s fortress in India through high-quality products, continued value for money, and an omnipresent network,” the company said in 2019. They also decided to invest in technology to make Jubilant FoodWorks, which owns Domino’s, into a “strong food tech company.” Some of the other main goals were keeping and growing the international business and growing Hong’s Kitchen.

Even though there was a pandemic, Jubilant FoodWorks under Pota did well in the first two goals.

A strategy called “fortressing” made deliveries more efficient because it cut down on the size of the delivery areas. More than 60% of Domino’s orders are delivered in less than 20 minutes. Almost all of its sales come from online orders, and most of them come from people who order on their phones. Online orders were 46 percent of delivery sales in FY17, and mobile orders were 57 percent.

As a general rule, the company prefers to have multiple small stores serve an area rather than one big store that serves a large extent. Since there will be new stores, revenue from the big store will be split up between them. The big store’s revenue is likely to be lower in the short term. But in the long run, the total income from all the stores in the network will rise as more people order from them. 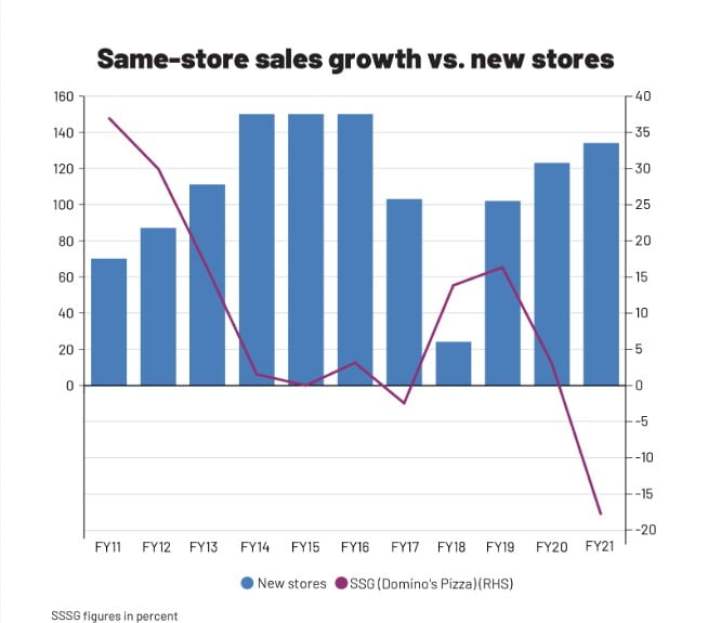 The SSSG is a critical number. In this way, it looks at the business of the retail industry. It looks at how much money the company has made in its stores that have been open for a year or more. This doesn’t include the sales made by new stores. For QSRs to reach more people, they usually open a lot of new stores each year. Thus, the SSSG is important to look at the long-term profitability of older stores.

LFL sales growth also considers stores that opened less than a year ago.

In February, the company’s management said that LFL would be the primary way the company would be able to keep track of its same-store sales growth. Because the company had a negative 14.2% SSSG in FY21, investors and analysts were nervous. Investors were worried about a weak SSSG even before Pota came on the scene.

This comes when the pandemic is going away, the economy is fully open, and dine-in is back in style over delivery. 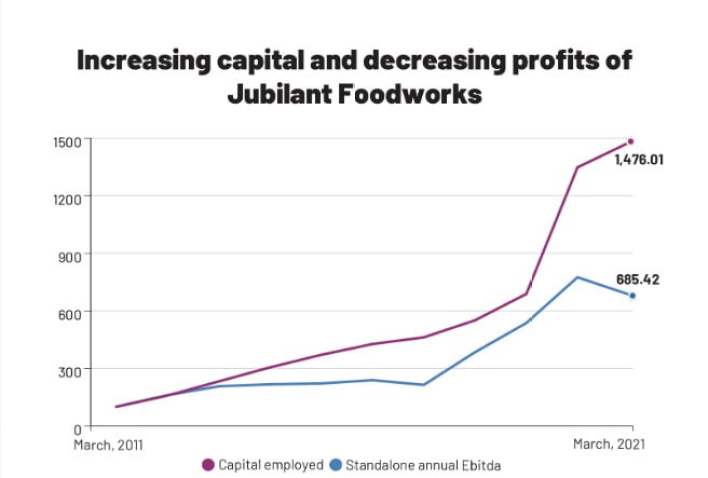 Dine-in vs. take-out: Which is better?

During the first few months of 2022, investors seem less excited about Jubilant and its QSR peers. Specialty Restaurants, a small-cap restaurant stock that focuses on dine-in, is doing better than the big QSR chains. Specialty restaurants are up almost 60% this year, compared to the same time last year.

It’s not clear how long deliveries will be widespread, but some people think they’ll stay popular because they’re easy and have become a habit. Domino’s also needs to grow its other brands, such as Hong’s Kitchen and Popeye, as a food-tech company.

It hasn’t been clear what the company plans to do with other brands since the end of December. Instead, it has opened 75 new Domino’s stores in a single quarter, which is a lot of stores.

About 90% of the QSR market in the United States is for pizza-burger-chicken chains, and about 72% of the market in India is for these types of chains. Domino’s has 21% of the market share in the QSR segment in India as of FY20, McDonald’s has 11%, and KFC has 9%. Burgers make up 31% of the total QSR market, while (fried or grilled) chicken makes up 15%, and pizza makes up 27%. With Popeyes, Jubilant did well. If it can do the same thing with Indian QSRs, it could get a lot of business. Hong’s Kitchen could be a good helper, mainly because the international trade is likely to worsen.

The Domino’s chain has 32 stores in Sri Lanka and eight in Bangladesh as of December 2021. DP Eurasia NV, which is one of the largest master franchisees of Domino’s Pizza, was also bought by the company last year, and it has a 33% stake. There were 789 stores open as of June 30, 2021, owned by the Netherlands-based company that owns master franchise rights in Turkey, Russia, Georgia, Azerbaijan, and the Netherlands. After that, the company raised its stake in DP Eurasia to 40% last year.

At least for a short time, Sri Lanka’s economy has been in trouble, and there is a lot of tension between Ukraine and Russia. This is terrible news for Jubilant, though. People who make money in January and March are likely to see some of the effects of this.

As of right now, investors who want to bet on Jubilant only care about betting on the company in the United States. The international business hasn’t grown to a size that is big enough. As a franchisee for Domino’s, Jubilant opened 75 new stores in Q3 FY22, the unique stores any company has opened in a single quarter. Today, there are about 1,500 stores for the company. Another thing the company has is 29 stores of Dunkin’ Donuts. There are 22 stores each of Hong’s Kitchen and Ekdum!; there are also four Popeyes.

Because Popeyes is an international brand with less competition in the segment, we think it’s the best company to grow profitably. It can standardize the taste and flavor of its food. Many people are competing for the business of Ekdum! and Hong’s Kitchen, which is why they can’t standardize and grow because they are so popular in small markets.

Changing reporting standards, geopolitics, and a recovering economy have led to a recent drop in the stock price of Jubilant, which is why Pota is leaving. Because the company has a long history, it won’t have difficulty finding a replacement for Pota.

On the other hand, investors will be looking at how Domino’s grows across platforms and how much it sells. The new managers will also have to deal with high inflation, which Pota didn’t have to deal with while in charge.

Raw materials, labor, and fuel costs make up about 75% to 80% of Domino’s costs. Food prices are going up, and so is the price of gas. It’s also likely that the cost of the workforce will go up because there have been a lot of delivery service providers in the last six months. Jubilant had to raise prices in the December quarter because of rising prices, so they had to do it.

Price hikes do not make people eat less pizza, but they do make them buy things like toothpaste tubes or soap bars less often.” If Domino’s prices go up, it will be able to charge the lowest fee for standard-quality pizza than any other company, says an analyst who has been watching the industry for a long time. This is because of Domino’s size and efficiency.

There are a lot of unknowns about Jubilant FoodWorks right now, which can scare people who don’t like taking risks. Pizza is still a good choice for people who have a strong heart that doesn’t have a lot of cholesterol. 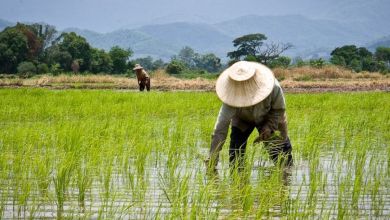 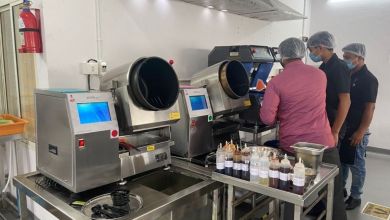 Fast Food: Why can automated kitchens be the key to 10-minute deliveries? 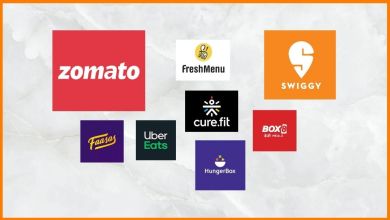 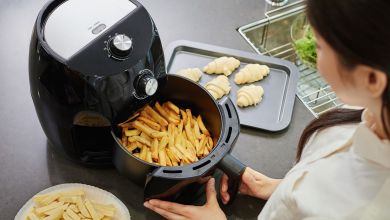 How Does Air Frying Work? Check out all the details here!