According to official census data released on Tuesday, China’s population rose at the slowest pace since the 1950s in the decade leading up to 2020, mirroring patterns in neighbouring South Korea and Japan. It now has a population of 141.2 crores, with growth declining for the fourth year in a row.
As per census data published by China’s National Bureau of Statistics, 1.2 crore babies were born in 2018, down from 1.465 crores in 2019 — a drop of 18% in a single year. The country’s fertility rate has fallen to 1.3, well below the replacement amount of 2.1 needed to replace a century.
The developments pose a threat to the ruling Communist Party as policymakers will now have to find ways to support fast growth in China, amid a decrease in joining the workforce and the existing population ageing rapidly.
The UN expects the population of China to decline after 2030, but analysts have indicated that this may happen in the next 1-2 years. By 2025, China will drop its ‘most populous’ name giving the crown to India, which is expected to have a 138 crore population in 2020 and 1.5% behind China.
What does the most recent data from China’s census say?
According to the 2020 national census, China’s population has increased by 5.34 per cent since 2010, from 134 crores in 2010. However, the rate of population growth has been slowly decreasing. The country’s annual growth rate fell to 0.53 per cent in the last decade, down from 0.57 per cent between 2000 and 2010, and was the slowest since the 1950s.
The working population of the country is now 89.43 crore, or 63.35 per cent of the total population, down 6.79 per cent from 2010. The number of people over 60 has increased by 5.44 per cent since the last census, to 26.4 crores, or 18.7% of the population.
However, a ray of optimism comes in the form of 14 years or younger kids who are now 25.38 crores or 17.95% of the population, up 1.35% from 2010. In 2016, China’s strict One Child Policy was relaxed and two children per family allowed to grow up as a result.
Chinese authorities claim that the controversial one-child scheme, which came into effect in the late 1970s, saved the country from extreme food and water crises by banning the birth of up to 40 crore people.
According to the South China Morning Post, the census data also supported anecdotal evidence that China’s people were migrating from Central and North-East to the more populated provinces on the eastern coast. In the last decade, the country continued to develop further: 63.89% live in urban areas, up by 14.21%. Its population living in rural areas decreased to 36.11%.
So, by when is the population expected to fall?
Experts believe the country’s population will continue to decline eventually, but exactly this will happen is a matter of debate. In the Financial Times, an April article quoted anonymous sources claiming that a downturn already occurred last year, but Chinese authorities published a report refusing this.
The population in Asia decreased for the last two years between 1960 and 1961 when the Great Chinese Famine, a catastrophe caused by the policies of Mao Zedong at the time, caused the population to fall by 1 crore people in 1960. In 1961, the number of Asians decreased by an additional 3.4 crore, accordingly.
In November, the Chinese government predicted that the population will peak in 2027, with the annual difference between the number of newborns and deaths shrinking to about 10 lakhs in the next five years. After 2030, according to the UN, the population will start to decline.
However, if births dip below 1 crore and deaths surpass 1 crore, some analysts believe a downturn could begin as soon as next year. 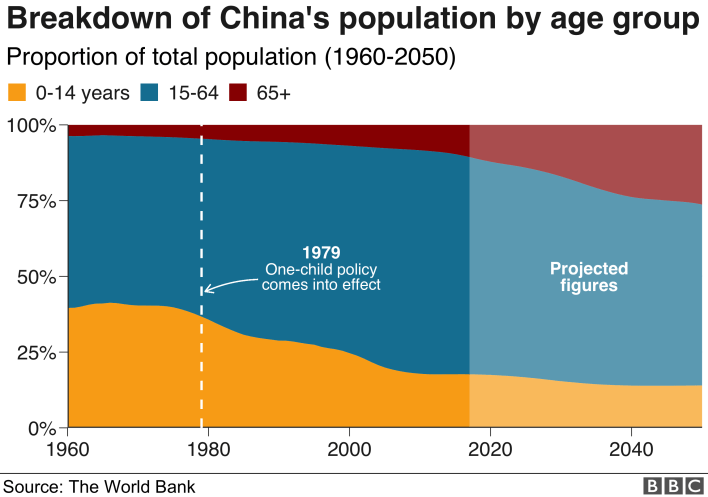 What are China’s concerns over its population dwindling?
China’s population growth is decreasing, which is a pattern that can be observed in many Asian and Western countries. For the first time in its history, South Korea’s population decreased last year. The birth rate in the United States has also fallen to 1.6, the lowest level ever seen.
When a country’s young demographic decreases, labour shortages emerge and have a significant negative effect on the economy. With fewer workers employed and adding to the country’s social expenditure system, demand for healthcare and pensions is likely to rise, further burdening the country’s social spending system.
However, unlike the other developing countries that are part of this movement, China remains a middle-income society despite being the world’s second-largest economy.
Developed countries such as Japan and Germany, will rely on investments in manufacturing, technology, and foreign assets to meet their demographic challenges. China, on the other hand, continues to rely on low-wage manufacturing and agriculture. According to economists, a decline in the demographic dividend could damage China and other developing countries such as India more than the developed world.
To address this issue, the Chinese government declared this year that it will raise the retirement age by a few months per year, a move that has elicited mixed reactions, with some applauding the opportunity to continue working and others grumbling about being pressured to do so. China’s retirement age has been 60 for men and 55 for women for the past four decades, or 50 for women in blue-collar occupations.
It is also anticipated that the government would increase incentives for couples to have more children, whereas these sops struggled to meet the higher cost of living and job options in the past. Authorities have also been recommended to reduce the number of children permitted for each household entirely.

See also  As India celebrates 72nd Republic Day; a look at where India stands and where the nation is headed - a common man's perspective

Chocolates to bring industrialisation in Ghana