Cow vigilante violence in India is defined as the use of physical force in the name of “cow protection.” Dwarka lynching: On Monday, a group of men attacked six people in a farmhouse in Chhawla, Dwarka, in southwest Delhi on suspicion of murdering cows, police said on Tuesday. One of the attackers, the keeper of the property, died subsequently.

Since 2014, mob attacks have grown every day, primarily targeting illicit cow smugglers and licenced cow sellers in some circumstances. There is controversy regarding whether there has been any shift in the number of such incidents, as government data indicates that communal tensions have decreased since 2014. Cattle slaughter is prohibited in the majority of Indian states. Cow vigilante organisations that claim to be guarding livestock have been violent, resulting in several deaths. Cow-protection organisations perceive themselves as preventing theft, defending the cow, or maintaining the law in an Indian state where cow slaughter is prohibited.

According to a Reuters study, there were 63 cow vigilante attacks in India between 2010 and mid-2017, most of which happened after Prime Minister Narendra Modi took office in 2014. According to the Reuter’s investigation, “28 Indians – 24 of them Muslims – were killed and 124 injured” in similar incidents between 2010 and June 2017.

Cow vigilantism charges have grown since the Bharatiya Janata Party (BJP) won a majority in India’s Parliament in 2014. The frequency and ferocity of cow vigilante attacks have been regarded as “unprecedented.” Since 2015, according to Human Rights Watch, there has been an increase in cow vigilante attacks.

The increase is related to India’s recent growth in Hindu nationalism. Many vigilante groups claim that the Hindu nationalist BJP’s electoral triumph in 2014 has given them “empowerment.” In September 2017, The Supreme Court of India ruled that each state should appoint a police officer in each district to combat cow vigilantism. The court was particularly concerned that animals were being butchered unlawfully, citing the case of 200 slaughtered cattle discovered floating in a Bihar river.

Dwarka lynching: A man was slain for allegedly slaughtering cows. 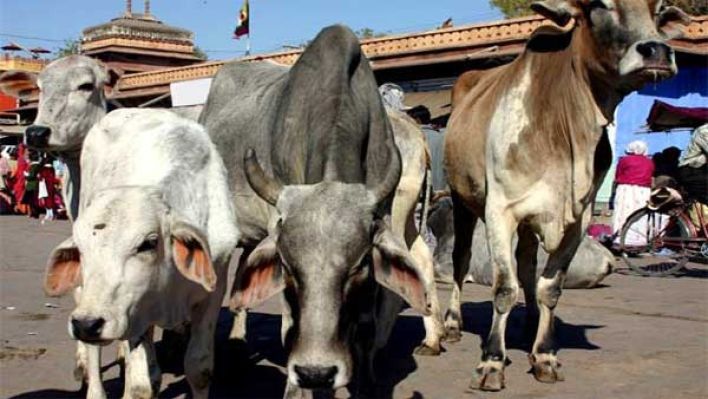 Dwarka lynching: A 40-year-old man died late Monday in Chhawla after being thrashed allegedly for cow slaughter by some men calling themselves gau rakshaks. Sumant Ojha, the guy who phoned the police officers, told TOI that as an animal activist, he was obligated to report the incident to the authorities, but that it wasn’t acceptable for the gang to take the law into their own hands.

“It took the policemen around 45 minutes to get to the farmhouse after I called the police control centre because I could give them the exact location.” Ojha remarked.

“Our role is to report crimes, not to commit them. Killing cows is wrong, but thrashing the men who did it is also wrong. Later, I learned that one of them, Rajaram, had passed away.”

In this case, two FIRs have been filed, one against the alleged cow slaughterers and the other against their assailants. The first FIR states that the Delhi Agricultural Cattle Preservation Act, 1994, and Section 11 of the Prevention of Cruelty to Animals Act were violated due to Ojha’s call.

According to Ojha, “I had heard that cows were being slaughtered in a farmhouse near Chhawla, but I wasn’t sure where it was, other than that it was close to the police station. I also knew the last four numbers of a pickup truck that was presumably used to carry the animals.”

After “a lot of looking about,” the animal activist claimed to have taken a cab and found the farmhouse. He stated he came upon some individuals outside who claimed they were there to guarantee those engaged in the cow slaughter didn’t flee. “I phoned the cops, but I couldn’t give them the exact position since I didn’t know where they were. To assist the officers, I had a local speak with them, “Ojha stated. “We walked inside when the cops arrived and discovered cow carcasses. We also discovered some folks who appeared to have been beaten and had injuries. They were surrounded by those who had thrashed them.”

Senior police officers denied Ojha’s claim that the thrashing continued while the cops were present.

“Those who were present when we arrived at the farmhouse were busily filming the cadaver, and the other group had departed,” one officer said. “It took us a long time to get there because we didn’t have a proper address.” Raids are now being carried out to apprehend people accused of thrashing and murder.

“Mohammad Arshad, Mohammad Shanu, Rajaram, Santosh Sahu, Praveen, and Ranjeet were present at the spot,” according to the FIR.

According to the FIR, Arshad, Shanu, Rajaram, and Sahu were injured and taken to the hospital, while the remainder were detained for questioning. “Two automobiles were present at the scene and were used for transportation.”

On Shanu’s accusation, the police filed a second FIR. “I work as a fruit salesman and occasionally assist with animal butchering,” Shanu says in the FIR. On Monday, a friend and I travelled to the farmhouse, which was already occupied by Rajaram, Santosh, Praveen, and Ranjeet.

Praveen and Rajaram bring cows from the villages, which we butcher at the farmhouse, pack, and transport to different parts of the country. He says, “When 15-20 men arrived, we were ready to load the meat. Gau rakshaks, as they were known, beat us with clubs and blows.” In this case, no arrests have yet been made.

See also  In the 5G race, the prize remains unclear

Rajaram, the farmhouse’s caretaker, was allegedly lynched on suspicion of cow slaughter by a group of men claiming to be “gau rakshaks” on the night of 10 and 11 April, according to the Delhi Police.

According to Jashodevi, “That evening, after finishing my food, I watched TV before falling asleep. When I awoke, I couldn’t find my husband anywhere. Instead, police officers were stationed at the residence.”

“We have six to seven cows,” Jashodevi stated, distraught over accusations of cow killing levelled against her husband. “I sold the milk from the animals to houses in the neighbourhood.”

She maintains that she and her husband have never killed a cow to eat meat. “We’ve never done anything like that before. Gau Seva is something I do regularly. Who would have allowed us to stay here if we did something like this?”

Rajaram was a member of the Yadav tribe. “We are Hindus, and we have never done anything like this (cow killing),” Jashodevi stated emphatically.

So yet, no ‘Gau Rakshaks’ has been arrested in connection with the cow slaughter in dwarka lynching case. 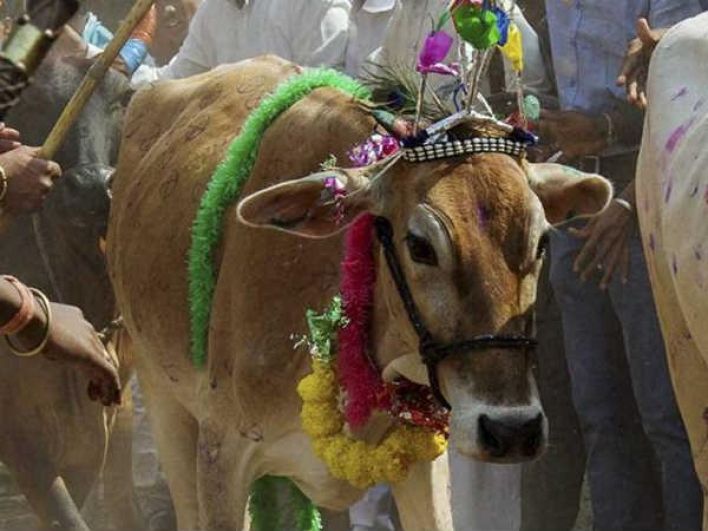 The Delhi Police received information that cows were being slaughtered and their meat was being sold in Chhawla. They claim, however, that a group of guys had already attacked the workers at the farmhouse before they arrived.

In addition to Rajaram, two more are said to have been thrashed. According to the Deputy Commissioner of Police (DCP), Dwarka, Shankar Choudhary, Rajaram and the other injured people were brought to the hospital. After being discharged from the hospital, he became ill and was transported to Delhi’s Rao Tula Ram Memorial Hospital, pronounced dead.

According to the Delhi Police, two First Information Reports (FIRs) have been filed with the event. One was filed against the accused attackers, while the other was filed about the suspected slaughter of animals.

So far, five people have been arrested. All five of them have been charged with violating portions of the law prohibiting the slaughter of cows.

However, no one has been charged with Rajaram’s assassination so far for Dwarka lynching case.

According to DCP Dwarka Shankar Choudhary, “Raids are underway to apprehend the suspects in the murder case. The incident occurred late at night, and teams were dispatched as soon as we received word that cows were being slaughtered and that humans were being beaten up. It was late at night, and the accused who had beaten up the men had gotten away. They are being investigated and will be arrested soon.”

The other men who were beaten up with Rajaram, according to a senior police official, did not work at the farmhouse. However, no gau rakshaks have been charged with Rajaram’s assassination.

The other men who were beaten up with Rajaram, according to a senior police official, did not work at the farmhouse.

Senior police authorities stated they had some clues on the suspects’ identities, and searches are underway in Delhi and neighbouring Haryana to apprehend them. “We are undertaking searches to apprehend the attackers,” stated Shankar Chaudhary, deputy commissioner of police (Dwarka).

This isn’t the only instance of this. We’ve seen a lot of similar incidents in the past, and they’re not going away anytime soon. What kind of world do we live in? Is there a world where murdering a human being is acceptable? Whatever the case may be.

What kind of message does this send about us, the Indians? How horrible is it to kill and not be apprehended on top of that? According to an FIR filed by one of the suspects, the incident occurred at 2.10 a.m. between April 10 and 11. According to the authorities, no arrests have been made in the murder and assault case, and they are still on the run.

The investigation used sections of the Indian Penal Code, including sections 429 (Mischief by killing or maiming cattle, etc., of any value or any animal of the importance of fifty rupees), 120 (Concealing design to commit an offence punishable with imprisonment), 120 B (criminal conspiracy), 34 (Acts done by several persons in furtherance of common intention), and other sections of the Delhi Agriculture Prevention Act and Prevention of Cruelty to Animals Act. The second case was filed after the wounded filed a complaint under IPC sections 302 (murder), 323 (voluntarily inflicting harm), 337 (causing damage by conduct endangering others’ life or personal safety), 341 (wrongful restraint), 506 (criminal intimidation), and 34 (criminal intimidation) (common intention).

When will humans be able to coexist peacefully with other living and non-living organisms in an ecosystem? Like it was supposed to be. Save Animals as well as Humans.

Infosys expects revenues to grow as much as 15% in FY23