As economists and analysts held their breath before the release of the Reserve Bank of India’s (RBI) Financial Stability Report for the pandemic year, the report seemed to surprise them all with its positive aspects. The report which is used to measure the health of the banking sector and the prevailing economic stress was recently released by the RBI.

The readings from the report show that the banks fared much better than expected. The concerns that the balance sheets must have been affected disastrously by the pandemic proved to be wrong, as the report suggested that the Non-Performing Assets (NPA) ratio was under check by the end of March.

Several regulatory policies and their opportune termination along with deleveraging by companies have helped the banks to ensure that the balance sheets show healthy figures. For the current year, the Reserve Bank of India has predicted that the NPA of banks may witness an inclination to 9.8 per cent. The drop is projected to be much sharper under several stress scenarios. Although, the projections behind these stress conditions are kept at an extreme low. The quality of banks’ assets may not drop down to the degree predicted in the report.

Taking a look inside the report of RBI

For the period ending March 31, the NPA ratio for the banks was 7.5 per cent. As compared to the earlier estimates, 7.5 per cent was a decent figure. As the pandemic disrupted the economy and most people lost their jobs, borrowers’ capacity to repay loans was struck and hence concerns were raised that the NPAs of banks would multiply. In July 2020 Report by the RBI, the NPA ratio was projected to increase from 8.4 per cent to 12.5 per cent in the baseline scenario by March 2021.

While the figures were projected to increase up to 14.7 per cent by March 2021 under stressed conditions. But the report clearly showed a violation of the predictions as the NPAs displayed a much lower number. This is not the first time that the country’s Central Bank has exaggerated the banks’ NPA position.

As pointed in the July 2020 report, the capital strength of banks which is calculated as the capital to the risk-weighted ratio (CRAR), was also estimated to drop to 13.3 per cent by March 2021 from 14.6 per cent in March 2020 in the baseline condition. Whatsoever, the banks managed to dodge the predictions gracefully by raising capital through several modes such as Qualified Institutional Placements (QIP) and public issues that helped banks to boost their capital position during the pandemic year.

Despite the Corona pandemic, the CRAR of banks showed a remarkable recovery of up to 16 per cent in March 2021 which was much higher than the regulatory threshold of 9 per cent. The public sector banks showed positive results in terms of capital strength. As the reports suggest, the capital position of banks is likely to remain in good health even under extreme stress scenarios. According to the RBI, none of the 46 banks is likely to strike major threats with their present capital position.

The report further flaunts that the banks have sufficient capital to protect them from a deterioration in their assets. Since March 2020, the proportion of Provisions to Gross Non-performing Assets (GNPA) recorded an increase from 66.2 per cent to 68.9 per cent in March this year.

The banks’ NPA was kept under check by several instruments. Some of them included loan moratoriums, a halt on NPA classification and their timely termination, and provisions to reconstruct loans among other measures effectively prevented the NPAs from crashing.

The banks were incentivized through several instruments. In October 2020, the RBI announced an On Tap Targeted Long Term Repo Operations (TLTRO) scheme worth Rs 1 trillion to extend liquidity support to banks and financial institutions. The scheme lets the banks lend one to three-year funds from the Central bank at a repo rate by extending government securities with equivalent or higher tenure as collateral.

This targeted oriented scheme launched by the RBI to vigorously lend to sectors that were hit by the pandemic. The RBI incentivized banks to lend at a low-interest rate to facilitate lending by distinct stressed sectors. But the scheme did not gain much popularity as there were few takers. 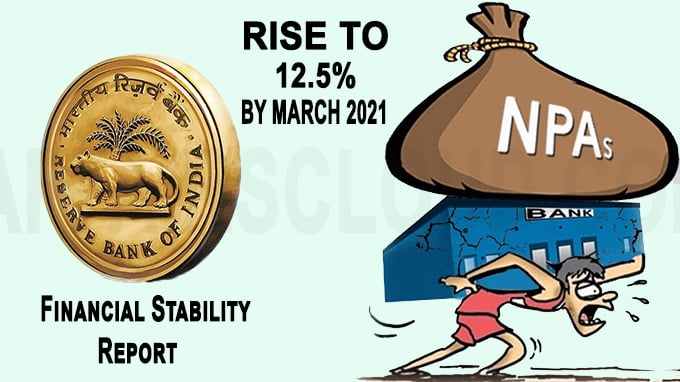 For the current year, the report estimates the NPAs of the banking sector to increase to 9.8 per cent of advances by 2022 March in the baseline scenario. The report further estimates the performance for Medium and Severe stress scenarios. According to analysts, the scenarios projected by the report looks impractical. In 2021-22, in the medium stress scenario, the Gross Domestic Product (GDP) growth is projected at slowing to 6.5 per cent and in case of severe stress scenario, the GDP further falls to 1 per cent.

The report further emphasizes a significant risk: the weakness in the Micro, Small and Marginal Enterprises (MSME) portfolio of banks. The MSME sector has been grappling with difficulties such as delayed payments and reduced demands over the years, the Covid-19 induced lockdowns enhanced the difficulties even more. To help the MSME sector emerge out of this mess, three loan reconstructing schemes were announced since 2019. Despite reconstructing, the Financial Stability Report pointed out that the pressure in the MSME sector continued to be increasing as the NPA ratio of the public sector banks increased to a striking 15.9 per cent in March 2021 from 13.1 per cent in December last year.

Though the pressure built on the MSME sector needs to be under scrutiny, experts believe that this might not be a severe threat. The 15.9 per cent NPA as stood in March 2021, is relevant for small loans up to Rs 25 crore. Although the government has taken several initiatives to increase the credit flow in the MSME sector, out of the total bank outstanding the share of the MSME sector is not more than 5 per cent. The increase in the flow of credit to the MSME sector is mainly accredited to the Emergency Credit Line Guarantee Scheme (ECLGS). The scheme facilitates loans to 25 lakh persons through Micro Finance Institutions (MFI). The scheme targets to provide complete guaranteed coverage to banks and other lenders. Under this scheme, the banks will be protected against a plausible failure in the repayment of loans. Furthermore, the Reserve Bank of India’s reconstructing schemes and the insolvency resolution package should smoothen the pressure on the MSME credit.

Moreover, analysts suggest that in the absence of several regulatory support instruments such as moratoriums and a halt on the classification of NPAs, the chances of an increase in fresh NPAs looks high. However, the successful repayment of loans by firms, healthier recoveries and accelerated credit growth as the pandemic struck economy expedites could together help in limiting the NPAs and check their growth. With the capital strength of banks improved, they are expected to be capable to support recovery during credit challenges.

The New Third Wave of Covid 19 is Inevitable

Importance of India and Indo-Pacific region in 2021