Human being evolved from early man to modern life because they had brains and tools making skills. The human brain is known for its problem-solving, critical thinking and creative abilities. It is a well-established fact that creativity can only flow when the brain works in a conducive atmosphere that is free from fear and restrictions. It is the inventions inspired by creativity and imagination that have made our lives easier today.

Creativity is not a cloth that can be neatly packed into a box; it is a fire that can light a matchstick or an entire jungle. For creativity to prosper, a society needs assurance against threats and appreciation for invention. Tagore, in his noble prize-winning poetry Gitanjali, imagines a time when his country would be free, not only from the oppressors but also from the chains of the human mind-

where the reason is without fear;

and the head is held high

where knowledge is free;

where the world has not broken

up into fragments by narrow domestic walls;

Where words come out from the depths of truth;

Where tireless striving stretches its arms towards perfection;

Where the clear stream of reason;

has not lost its way;

into the dreary desert sand of dead habit.

Is India a free society?

The mind can only be free and fearless when society provides an environment of safety.

It is only a free society that prospers, invents andlives happily. Age of Enlightenment is a proof and a statement to the World community that excepting different thoughts and opinions is as important as excepting truth. The demand is not for absolute freedom but freedom with reasonable restrictions. The dark ages is a metaphor that can be used in every situation and any society. 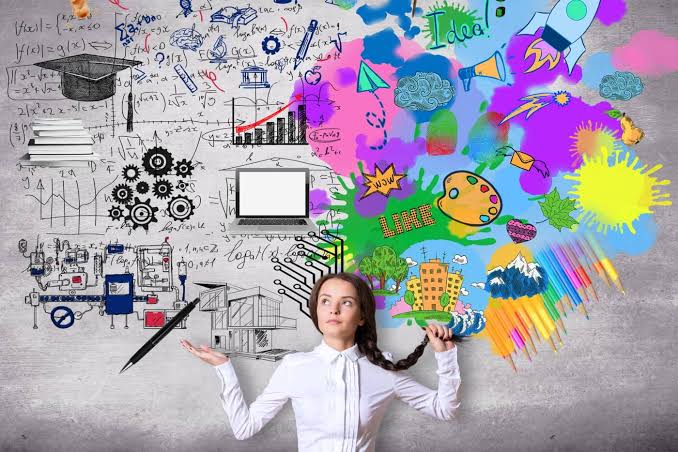 What happened recently that sedition is the centre of attention?

Chief Justice of India NV Ramana, in his recent remarks, sent a strong message to the government. The Supreme Court is prima facie convinced of misuse of sedition law to trample free speech and liberty. In the Kedarnath judgement of 1962, the court upheld sedition law or section 124A but reduced it to the subversion of an elected government by violent means. It’s about time the Supreme Court reviews its 59-year-old judgement so that section 124A is applicable in the present scenario.

The CJI expressed concerns over low conviction rates of 3.3% in sedition charges. National Crime Records Bureau NCRB reports show that in 2019, 21 cases of sedition were unregistered because of lack of evidence, two were false cases, and six were civil disputes. Since the NDA government came to power, the use of the sedition act has surged dramatically. In 2019 as compared to 35 cases in 2016. This is a 165% jump.

Recently famous sedition charges against Vinod Dua, Ayesha Sultana and Disha Ravi and were dismissed. Eminent judiciary members like Justice DY Chandrachud, Justice L Nageswara Rao, Justice UU Lalit and several other Supreme Court judges have flagged sedition law. According to the judiciary, it is like a muzzle on media; it’s outdated, it is used to silence dissenters and at times unconstitutional. The constitutionality of Section 124A has been challenged several times, recently by senior journalist and economist Arun Shourie.

What is sedition law, and what are its provisions? 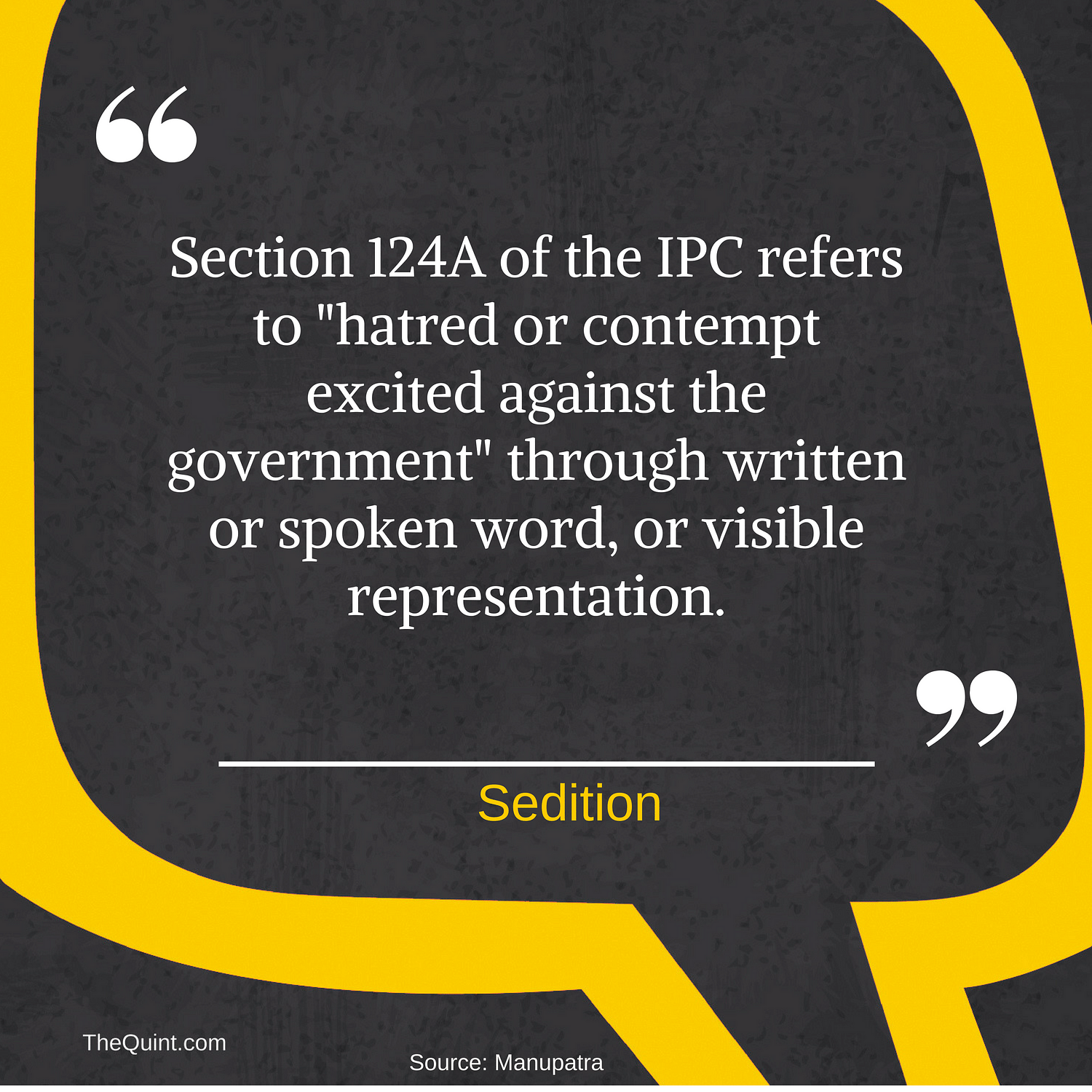 According to section 124A of the Indian penal code IPC

Whoever by words either written or spoken, or signs, or by visible representation, or otherwise tries to incite hatred, aggravate dissatisfaction and contempt against the established government by law in India will be punished with life imprisonment for life or three years, or fine, or both. In Kedarnath Singh versus State of Bihar 1962, the court upheld that sedition can be only sustained if incitement of violence is advocated.

In M N Roy Memorial lecture Justice A P Shah cleared that very powerful speech or speech with vigorous words critical of the government is not sedition. People are slapped with sedition if they use anti-India slogans or pro-Pakistan slogans. In Basu and Tandon case, the Supreme Court held that slogans that do not destroy public order are not sedition. The courts, in judgement after judgement, have been trying to logically explain the draconian act hence giving it a narrow interpretation. Legal experts like Siddharth Narain say that if the definition of sedition is widened, it will not stand the constitutionality test.

How it hinders free speech?

For a democracy to thrive, it needs a ruling party, an opposition, that criticises the ruling party and media that spreads unbiased information and truth. India, as of now, does not have a strong opposition; the media is rigged and highly opinionated. Media is crucial because it busts corruption scandals (the watergate scandal) and will criticise the government if its actions are unreasonable or unjust. Mere criticism cannot be termed as sedition. 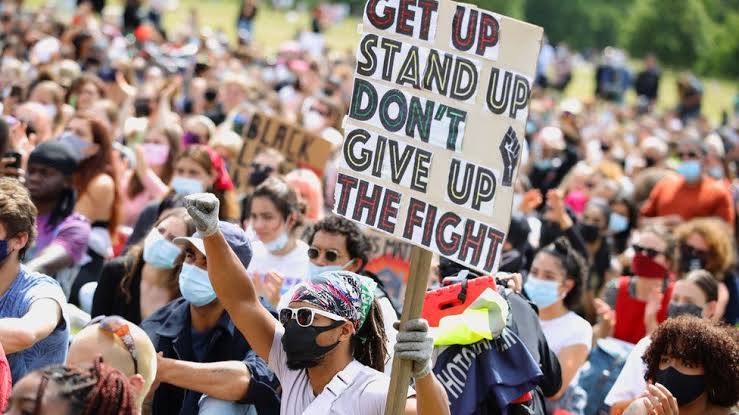 A law that restricts an act or event needs to be worded in a cogent, lucid and careful manner. If the law is written vaguely, it’s just a matter of time before the words are misused. Hatred, contempt, disaffection are vague and broad terms. Sedition is a constitutional anomaly because it is not part of article 19 (2). The article states that the fundamental right of free speech is subjected to reasonable restrictions, and sedition is not a part of it.

The Constituent Assembly unanimously agreed not to include sedition as a ground against free speech. Indian jurisprudence has made it clear that any law is unconstitutional if it is arbitrary. The law of the land applies equally to everyone. International practices use clear and imminent danger as a reason against free speech.

India will celebrate its 75th Independence Day, yet it still has a pre-independence era law in practice. It is an irony that the new and modern India has not abolished old and traditional laws. Restrictive laws like sedition have no place in mature democracies. The only solution is declaring the sedition law unconstitutional. For any country to prosper, it needs an environment that fosters creativity and not hinders it.

Creativity stems from different elements and flows in different directions; one cannot steer it. Creativity comes in various forms and shapes, which can be acceptable for someone but unacceptable for the other. Living in a diverse country with a diverse population, laws like sedition do not promote freedom of thought.

Villagers in Assam selling kidney for money- is that what we have come to?

I am a person who believes in freedom of human mind. A free mind is highly creative and imaginative. Imagination is not a cloth that is to neatly folded in a box, but it is fire. It can light an entire jungle or a single matchstick, it depends upon the free environment.
By Aishwarya Ingle
Follow Us
Weather
New Delhi, IN
Mist
25 ℃
34º - 25º
100%
2.57 km/h
34℃
Sun
36℃
Mon
36℃
Tue
35℃
Wed
35℃
Thu
Recent Tech News
Facebook Twitter WhatsApp Telegram Viber
Back to top button
Close
Popular Posts
Most Commented
Recent Comments
We use cookies on our website to give you the most relevant experience by remembering your preferences and repeat visits. By clicking “Accept All”, you consent to the use of ALL the cookies. However, you may visit "Cookie Settings" to provide a controlled consent.
Cookie SettingsAccept All
Manage consent