The European Union is battling climate change with challenging policies at home and with strong assistance from International partners. Climate action is at the centre of the European Green Deal– an aspiring package of regulations ranging from strongly reducing greenhouse gas emissions, to protecting Europe’s natural environment and to financing in most advanced research and innovation. 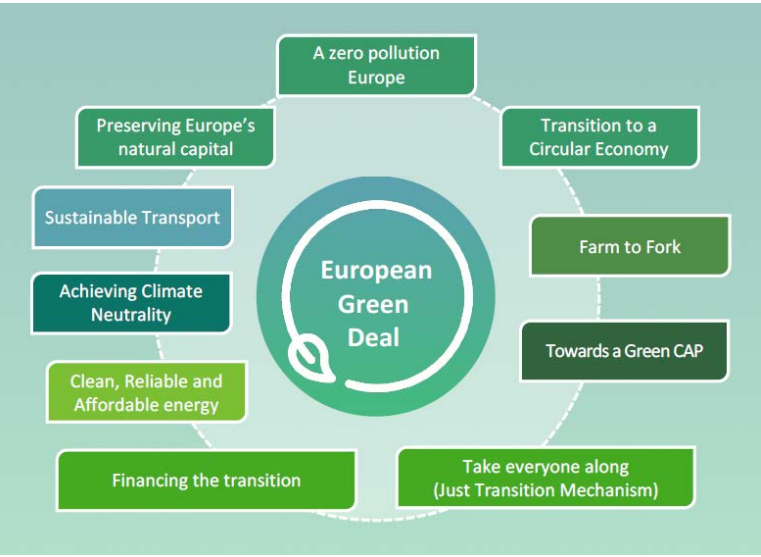 With the Green Deal coming into effect, notable changes in various industrial sectors are expected to be followed. Automobiles with internal combustion engines will vanish from the European automobile showrooms by 2035. Producers of steel and cement producers will compensate for every ton of carbon dioxide their factories produce.

Unless cargo ships run on cleaner fuels, they may be restricted from docking in ports like Hamburg (Germany) or Rotterdam (Netherlands). Synthetic fuels manufactured with green energy will be compulsorily used by commercial airlines.

The European Union’s ambitious target to reduce greenhouse gas emissions by at least 55 per cent by 2030 will affect almost every industry in the economic bloc. The Green Deal is further expected to impact the job environment of the trade bloc.

The European leaders declared that the Green Deal which was presented a few days back could increase Europe’s chance to explore and adopt new technologies like offshore wind generation, hydrogen driven aircraft engines and electric car batteries.

But the path towards such a revolutionary transition is not easy and might be painful for a section of consumers and firms. The Green Deal is most likely to increase the cost of a wide range of products and services, for imported example video monitors from China, a vacation flight to Spain or even a full tank of petroleum.

Companies that make old-fashioned products like parts for internal combustion engines, must brace themselves to go out of business or start adapting to the changes. The polluting industries of the European Union like steelmaking directly employs 330,300 people, the Green Deal is all set to remodel and restructure them.

Frans Timmermans, the European commissioner whose brain-child is the Green Deal, announced on July 14 that some sectors will gain more than others. He also said that the responsibility to show that the liability and the profits can be distributed impartially lies on the European Commission. The European Commission’s strategy, “Fit for 55,” demands its 27 member states to come forward and join hands to reduce their emission of greenhouse gases by 55 per cent by the end of this decade, compared with 1990 levels.

The European Union’s target is more ambitious than that of the United States, which have pledged to cut down emissions by 40 per cent to 43 per cent. The Green Deal, though aggressive is behind Britain, which committed to reducing emissions by 68 per cent. The world’s greatest emitter, China, has only announced that it aims for the emissions to crest by the end of this decade.

Here’s how the Green Deal is expected to affect Europe’s industrial sector.

The majority of the automakers have agreed to shift electric vehicles, but many have countered the proposal of setting an expiration date on the fossil-fuel driven automobiles, which still brings out the most profit. The Green Deal would effectively demand all new vehicles to be completely emission-free by 2035, eliminating any flexibility by automobile companies like Mercedes-Benz, Renault or Volkswagen to continue selling some petrol or diesel-powered vehicles which also include hybrids.

The commission’s strategy also incorporates some facilities that will benefit the automobile industry. Public funds will be utilized to help in constructing charging stations every 60 kilometres on crucial highways. This move is expected to encourage sales of electric vehicles. The commission plans to help in funding a chain of hydrogen fueling stations, which will benefit companies like Volvo and Daimler that are planning to construct long-haul trucks that are driven by fuel cells capable of converting hydrogen to electricity.

The association of European automakers raised complaints against the commission’s plans. According to the association, the charging networks proposed by the commission were not compact enough and that it would be unjustified to prohibit internal combustion engines completely.

CEO of BMW, Oliver Zipse, said in a statement that the European Union should aim at innovation rather than ordering, or effectively prohibiting, a particular technology. Oliver Zipse is also the president of the European Automobile Manufacturers’ Association.

Aircraft are prime emitters of carbon dioxide gas. It is a laborious task to convert aircraft to emission-free operation. According to the proposals made by the commission, airlines will be pressured to begin mixing biofuel with the fossil fuels they use presently. Furthermore, they will no longer enjoy tax breaks on fossil fuels.

Putting in simple terms, they will have to pay a hefty amount to pollute more. Airlines for Europe, the largest European Union airline association that represents EasyJet, IAG, Air France-KLM, Ryanair and Lufthansa Group- Europe’s largest flagship and cheap airline companies- have commented that their members support a green transition but at the same time, they desire simpler rules and economic support.

Willie Walsh, the director-general of the International Air Transport Association, expressed in a statement, “Taxes siphon money from the industry that could support emissions’ reducing investments in fleet renewal and clean technologies.”

The Green Deal targets companies that ship consignment by water, compelling them to pay more for the greenhouse gas emissions they produce to encourage their adaptation to greener and cleaner energy. Presently, the majority of the ships travelling the seas are driven by low-grade oil that is a major polluter.

Lobbyists of the shipping industry have already protested that the plan was unclear on how it would be applied and which shipping routes would be impacted. According to S&P Global Platts, it is unclear whether the regulations would be implemented only on the European routes, or half the trade between the EU and China.

The European Commission’s strategy would increase the cost of polluting by strengthening the European Trading System, which forces companies to compensate effectively by paying for the deadly carbon dioxide they emit into the environment. The expectations of the changes have already assisted in spiking up the cost of credits by almost 50 per cent.

The steelmaking industry has warned that the commission’s proposals could further destroy their competitive dominance over producers in China. It would also bring down the funds needed to shift to lower emissions. Koen Coppenholle, CEO of Cembureau, a cement industry trade group said that the ultimate result will be that the industry will experience higher carbon costs.

This will be done mainly by raising the charge that utility firms pay for power produced by fossil fuels, which would make solar and wind more economically friendly. Considering the number of business interests at stake, the policy has a chance to face enraged lobbying by industry officials as it proceeds through the law-making process in European Union’s Head Quarter.

The commission’s recommendations demand endorsement by the European Parliament and leaders of the European national governments before they become law, this whole process is anticipated to take almost two years.