Why are we still collecting the same proportion of taxes as we did a decade ago if demonetization has reduced black money and increased formalization?

Six years after Prime Minister Narendra Modi’s demonetization experiment, some commentators and economists argue that demonetization was a great success, or at the very least not the disaster that was portrayed.

Specifically, 23 quarters after demonetization, the last quarter’s significant GST collections demonstrate India’s economy’s increasing formalization and, as a result, achievement of demonetization’s stated goals. This is similar to former US President Donald Trump’s claim in November 2018 that global warming and climate change are a hoax because November was one of the most coldest months on record in the United States.

Modi’s cherished goal of demonetization was the abolition of black money. While there is no precise definition of “black money,” it is widely accepted as untaxed money. Unaccounted money is usually used to buy real estate, gold, and luxury items, with only a small portion kept as cash. If there is a slight reduction in overall black money in the economy, tax collections should increase. Income, consumption, and business loans can all be used to conceal black money. Regardless, increased direct or indirect taxes at the state or federal levels will result in a significant reduction in black money in the economy.

For each Rs 100 of India’s economic output, the Union and state governments collected Rs 16 in total taxes (direct and indirect) in 2010. (GDP). Despite demonetization, India’s overall tax-to-GDP ratio is still 16% after more than a decade. That is, the taxed portion of India’s economic activity remains constant before and after demonetization. Why are we still collecting the same proportion of taxes as we did a decade ago if demonetization has reduced black money and increased formalization?

In fact, despite no overt measures to eliminate black money and force economic formalization, India’s overall tax-to-GDP ratio increased from 14% to 16% between 2000 and 2010. Claiming victory for demonetization after six years by cherry-picking growth rates of GST collections in a post-pandemic year is both dishonest and inane.

India’s use of cash is among the highest of any major economy, accounting for 14% of GDP, compared to 3% for developed countries and 5-7% for developing countries such as Bangladesh and Indonesia. Modi was completely incorrect in believing that eliminating nearly every currency overnight would reduce and discourage cash use.

What can account for the rapid rise in UPI payments if cash levels have increased? Once again, this is a plot device. Overall digital costs such as RTGS, NEFT, IMPS, credit cards, debit cards, and UPI grew at similar rates before and after demonetization, according to RBI data.

Modi also claimed that demonetization would eliminate counterfeit currency. Only after money has been transacted and eventually detected as bogus by a recognized institution such as a bank or the RBI can it be confirmed as bogus. The detected counterfeit currency represented only 0.002% of the total value. Even if we assume that undetected phoney cash is a thousand times greater than detected cash, it still accounts for only 2% of total currency. It would be “Tughluqian” to eliminate 86% of all money in order to catch 2% of counterfeit currency.

More absurd are recent claims by prominent commentators that demonetization had little impact on the Indian economy because GDP increased by 8.3% in FY2017. Demonetization was announced in the middle of third quarter of the fiscal year 2017. Solid real GDP growth slowed to 6.3% in the fourth quarter, down from 9.1% the previous year.

Furthermore, GDP growth fell sharply in FY2018, from 8.3% to 6.8%. The economy lost nearly Rs 2 lakh crore in output in the year following demonetization. To claim that demonetization had no effect on GDP growth requires either willful ignorance, intellectual dishonesty, or a desire to work for the Modi government. Modi’s uncharacteristically panicked speech five days after demonetization, pleading for more time to bring back all the black money and failing which he asked to be punished, was the clearest indication that demonetization was an ill-conceived and completely botched idea from the start.

No patriotic Indian will ever want to punish or harm their prime minister, regardless of how serious their errors are. However, singing demonetization hymns after all the devastation and pain it has caused is an insult and a disgrace to a billion Indians. It is best if we as a society admit that demonetization was independent India’s greatest economic blunder and move on.

Former RBI Governor Raghuram Rajan stated that demonetization and the Goods and Services Tax (GST) were the two major headwinds that slowed India’s economic growth last year, and that the country’s current 7% growth rate is insufficient to meet its needs.

On Friday, Rajan told a crowd at the University of California, Berkley, that India had grown faster for four years, from 2012 to 2016, before being hit by two significant headwinds.

How did demonetization affect tax collections?

It has significantly increased tax buoyancy and brought in a large number of new return filers.
Even a year after the event, the debate over whether demonetization was beneficial or detrimental to the economy continues. Former RBI Governor Raghuram Rajan slammed it in a recent speech.

While one can debate whether the ban on high-value currency notes killed terrorism, corruption, and counterfeiting with very little data, one area where its impact can be quantified is tax compliance. 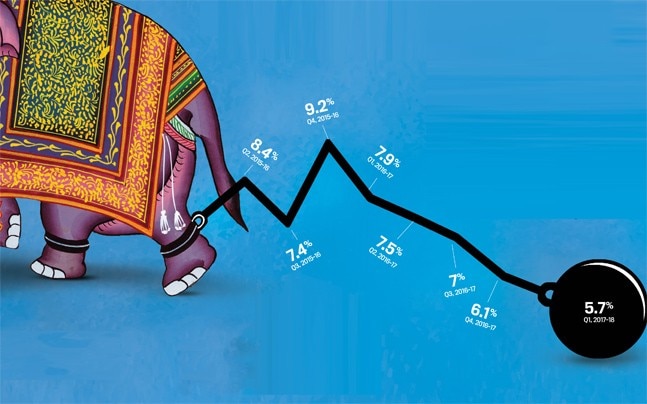 In the last sixteen months, there has been a premature analysis of India’s tax compliance metrics based on sporadic data points cited by the Finance Minister and tax officials. Official data on direct tax collections for FY17 and FY18 are now available, with the deadline for filing FY17 returns on March 31. This enables a more objective examination of the impact of demonetization on India’s tax base. The majority of the news is favorable.

India’s direct tax collections increased for the second year in a row in FY18. Net collections (gross mop-ups minus refunds) increased by 17.1% to 9.95 lakh crore in the most recent fiscal year.

This comes on the heels of a 14.6% increase in mop-ups in FY17. It should be noted that in recent years, income tax rates have remained unchanged, with only minor surcharge and cess component increases.

When compared to the first two years of the NDA rule, the figures for the last two years are very encouraging. India’s direct tax collection increased by only 8.9% and 6.9% in FY15 and FY16, respectively.

However, a 14% or even 17% annual increase in direct taxes is not uncommon in the Indian economy.

Direct tax collections, for example, increased 14.3% in fiscal year FY14 (under the UPA government). In fiscal year 2011, they increased by 18%. These figures were clearly obtained without the use of large denomination currency notes.

So, how can we tell whether direct tax collections have increased since demonetization?

Direct tax buoyancy is a good way to measure this. Given that direct taxes are levied as a percentage of annual income for both individuals and businesses, tax collections should follow GDP growth. Tax buoyancy is calculated by dividing annual tax collection growth by nominal GDP growth. The greater the number, the greater the degree of compliance. When applied to India, this metric reveals that tax buoyancy has increased since demonetization. Over the seven-year period, direct tax buoyancy ranged between 0.5 and 1.1 times, averaging one.

Simply put, the Centre received an equivalent new rupee in direct taxes for every additional percentage point of nominal GDP growth in India. After previously hovering around 1.0, direct tax buoyancy unexpectedly fell to 0.8 and 0.6 times in FY15 and FY16, respectively.

This is welcome news, as India’s nominal GDP growth has been below historical levels due to low inflation over the last two years. If nominal growth picks up and the newly discovered tax buoyancy continues, the Centre’s direct tax coffers may fill up even faster in the coming years.

Citizens do not pay all direct taxes that flow into the Centre’s coffers voluntarily. The Central Board of Direct Taxes (CBDT) releases direct tax collection figures that include mandatory deductions via the dreaded tax deducted at source (TDS).

It accounts for one-third of total collections each year. The number of Income Tax (IT) returns filed each year by individuals and businesses is a good way to measure voluntary tax compliance while excluding the impact of TDS.

In FY14, just before the NDA took power, taxpayers filed 3.79 crore IT returns (this includes individuals, small businesses and companies). Over the next two years, to FY16, this figure increased to 4.36 crore. In two years, that’s a 15% increase.

However, the number of filings increased to 6.84 crore by the end of FY18, according to the most recent CBDT data (provisional). This is a 57% increase over the last two years (2.48 crore new filings).

The NDA government has made anti-evasion a top policy priority in its last few Budgets, systematically closing loopholes in tax laws. The CBDT has been on high alert to show good collection numbers during the post-note ban period, launching a barrage of notices, warnings, and raids on non-filers.

However, without looking the gift horse in the mouth, this new found improvement in tax compliance can be celebrated. Bringing non-filers into the fold, after all, is the first step toward broadening the income tax net. Once a citizen starts filing returns, he or she is obligated to contribute to direct tax collections. Income tax payers in India have long felt victimized because they make up such a small proportion of the population, with dozens of memes and jokes devoted to this ‘unlucky’ 3%.

Recent data on India’s tax base, however, indicate that this figure is now quite outdated. In the most recent Budget, the Finance Minister estimated India’s current direct tax base at 8.27 crore taxpaying entities. The official definition of ‘tax base’ includes all assessees who filed IT returns and paid TDS in the previous three years.

According to the most recent Census, there are now 25 crore households in India. If agricultural households account for roughly 40% of that total (as agricultural income is tax-free), the total number of potential tax-paying households (or entities) is estimated to be around 15 crore. The tax base of 8.27 crore accounts for more than half of this total.

A rough estimate of the number of all individual taxpayers is also reassuring. The working population is estimated to an account for approximately 40% of the total population of 132 crore (52.8 crores). If agriculture employs half of the workforce, a tax base of 26 crore people could be created. With over 6 crore of individual income tax payers, one-fourth of those who owe income tax have already paid it.

However, as India’s income levels rise in the coming years and the country transitions to a middle-income economy, these new tax filers should be able to move into higher tax brackets and pay their fair share of taxes. This should allow the government to relax anti-evasion measures and lower income tax rates.

Meta to lay off 11,000 workers: Why is Facebook's parent company laying off workers, and what comes next?

Japan To Invest 70 Billion Yen In A new Chip Company