After petroleum, hikes in natural gas and petroleum gas. When will this uncontrolled price hike end?
Although the prices of Compressed Natural Gas (CNG) have been lower than petrol and diesel, price hike in every type of fuel that the common man depends on is not good news. Lately, prices of CNG have risen to 43 rupees per kilogram and that of PNG has risen to 28.41 rupees per standard cubic meter. However, the price hike which affects a large number of the Indian population is that of Liquified Petroleum Gas (LPG). In Rajasthan, the prices are now 798 rupees per cylinder. A hike of 100 rupees has been observed in just one month. In comparison with prices in December, the price of LPG in February is 200 rupees higher.
Who is suffering?
There are a total of 28 crore LPG consumers in the country. These hikes put pressure on the poor and the middle class of the country. The budget of each household increases significantly; raising the expenditure will only decrease the purchasing power of the people. It is ironic that a country that is supposedly focussing on self-sufficiency, is not even doing the bare minimum to support the ones who will ultimately lead to an inward-looking economy.
Households with more than five members are the worst hit. The expenditure has significantly risen.
Families living in the outskirts of cities have switched back to firewood. They need to cook and fill their stomachs somehow.
Finance Minister Nirmala Sitharaman has called the fuel price hikes, ‘a vexatious issue’. She acknowledges that the only solution to this problem is a reduction in taxes. The end consumer will benefit only then. However, she is not ready to bring down the taxes imposed by the central government.
The center and the states, both will have to talk and come to a consensus so that this inflation is reduced. However, the central government is not ready to reduce the taxes first, and be a ‘role model’ to the states; but the opposite is happening in many states. 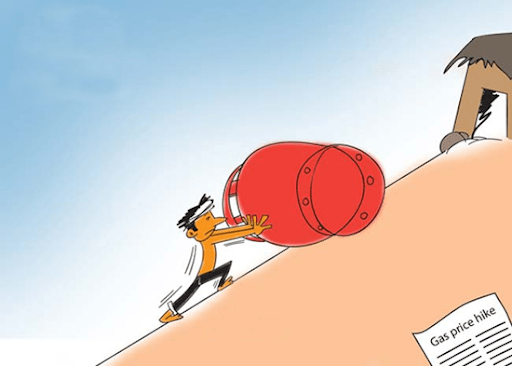 Why is the Government reluctant to reduce fuel prices?
One very important reason is revenue collection. When the government is running on a fiscal deficit, revenue in the form of taxes is very important. However, one might ask, isn’t the government getting enough revenue through other sources? The answer lies between Yes and No.
Over the years, governments have been criticized over fuel prices. The fuel prices now, just seem more ridiculous than before. Most developing economies depend on petroleum taxes to meet their fiscal demands.
The reason is that taxes on fuel are the easiest form of revenue for the government. Tax evasion is low and there is no collection charge. No leakage is ensured since large recognized companies take care of transportation and quality. Hence, the government is becoming more and more dependant on petroleum taxes.
In the fiscal year 2022-22, the estimated revenue collection as excise duty on petroleum, would be 3.35 Lakh Crores and, the revenue collected in the form of GST would be 5.3 Lakh Crores.
Excise duty on petroleum alone amounts to 60% of the revenue collected through GST on all goods. Hence, maybe now it is not surprising that the government is reluctant on reducing taxes on fuel.
However, these reasons cannot be used to justify the way the common man is being neglected.
A Possible Solution- GST
For a few years now, the issue of bringing petroleum prices under the umbrella of GST has been making news. According to Article 279(A) clause 5, the GST council can recommend the date when petroleum prices are to be brought under the Goods and Services Tax. The motto behind the introduction of GST was ‘One Nation, One Tax‘. The reason it hasn’t been done yet is again related to revenue losses to the government.
Prime Minister Narendra Modi, during a recent Press Conference, said “The government is sensitive to the concerns of the middle class. They are committed to bringing CNG under GST.” No mention of the prices of petroleum there too. I wonder how the government is expressing its concerns towards the middle class because there is no improvement from where I look at it. However, I might be wrong or ignorant.
Advantages of bringing Petroleum under GST
Petroleum Minister Dharmendra Pradhan strongly backs the idea of bringing petroleum under GST. Many other economists and experts are of the view that if the burden on the end consumer has to be decreased, GST is a plausible solution. The daily revision of fuel prices has put an unnecessary burden on the consumers. The center and the state will keep receiving enough revenue and the price will decrease. At present, more than 60% of the price a consumer pays for petrol is tax.
Consumers have to pay extra because of the cascading effect of the present tax system on petroleum.
For instance, in a hypothetical situation, let the cost of petrol be 2500 rupees, then

Hence, GST will eliminate the cascading effect. Cascading effect occurs when a tax is applied over another tax. Here, VAT is being applied over Excise.
It will also keep a check on the price rise and would lead to a more rational fuel price.
Keeping in mind that a GST of only 12% will lead to huge revenue losses for the government, no economist recommends the lowest bracket of GST for petroleum. Even if the petrol prices are brought under the highest bracket of GST (28%), with an additional cess, the prices will still be lower than what it is now.
Another advantage is that when one tax is applicable across the country, there will be no issue of politics over it.
Challenges
Primarily, the huge revenue loss to the government is the reason why the present government is hesitant to implement GST for petroleum.
The second problem relates to the consumers. Depending on the amount of additional cess, the consumers might have to pay the same price they pay now.
A drastic change to 28% GST might not be possible in one go. However, a change needs to start somewhere. Economists suggest that the government should start with a gradual decrease in the present taxes. This will pave the way to decreasing the taxes to as low as 28%.
The ultimate aim of any government should be to decrease the burden on the common man. Justifying the price hike with reasons such as the fiscal deficit of the government is not going to solve the problems of inflation nor increase the trust of the people in the government. A slow and steady move towards decreasing the taxes will not only bring a glimmer of hope to the common man but might also take the government a step closer to its promise of ‘Acche din‘

The income Inequality of India has impacted the small-scale industries severely, but is the scenario going to evolve in the wake of employment opportunities?