The private-company renovated bridge collapsed at Morbi in Gujarat, killing more than 130 people, after the company had stated that it would last for at least another eight to ten years.

The Ahmedabad-based Oreva group, according to records from the municipality evaluated on Monday, was assigned a contract to maintain and run the tragic hanging bridge for 15 years while charging users tickets between Rs 10 and Rs 15 each. However, the private-company renovated bridge collapsed at Morbi in Gujarat, killing more than 130 people.

The incident came after the company had stated that it had hired experts for the renovations and that the material had been constructed in accordance with requirements by specialised firms and would last for at least another eight to ten years, allowing people to have a carefree adventure. This was said by the Managing Director of the Oreva group, prior to the bridge’s official reopening after seven months of renovation.

The Managing Director of the Oreva group said that the renovation may last for the next 15 years if people behave appropriately and don’t harm the property, noting that the bridge’s 100% renovation cost merely Rs 2 crore. The hanging bridge, which was originally constructed in 1887 by the former Morbi monarch Vaghji Thakor.

The hanging bridge, which was originally constructed in 1887 by the former Morbi monarch Vaghji Thakor, was reopened to the public on October 26 in front of the media by Oreva Group’s Jaysukh Patel and his family.

In response to queries from local reporters, managing director Jaysukhbhai Patel spoke in Gujarati and said, “As far as we know, the bridge was constructed at a time when there was not much technological innovation, and initially, only wooden planks and beams were used to make the bridge.”

Adding to that he said that they had sent the requirements to companies like Jindal, and got the raw materials according to the technical specifications and requirements. Mr. Patel went on to say that the entry price was necessary to control crowd size and entry. They also did not want to overburden the bridge’s strength, he said.

Pated further said that they will be revising the entry fees by one to two rupee every year for the next seven years. And with the support of the President of the Morbi Municipal Corporation and Collector, they will be giving discounts for students and for those coming in big groups.

In the press conference, Mr. Patel stated that Oreva had subcontracted a portion of the renovation project to “Prakash bhai,” a division of Dev Prakash Solutions, because they had handled a portion of the post-quake repairs in 2007. 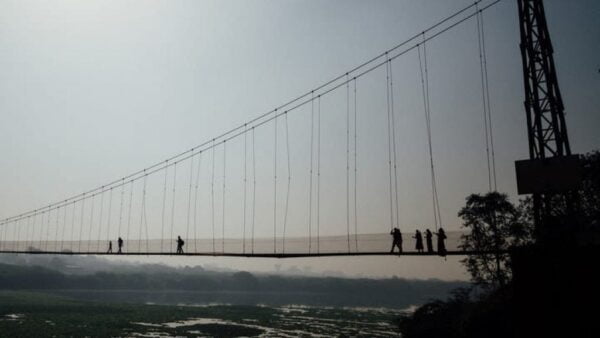 According to documents, the Oreva group opened the bridge to public earlier than planned.

According to Mr. Patel, his company will be in charge of the management and maintenance, while a company with its headquarters in Ahmedabad has been tasked with installing the lighting. The firm had intended to keep the bridge available to the public until 6 or 6:30 pm, but once the lighting work was finished, they would extend the hours until later in the night for evening strolls.

According to documents, the Oreva group opened the bridge to public earlier than planned.

After the bridge collapsed, Sandipsinh Zala, the chief officer of Morbi Municipality, alleged that the corporate house had not obtained a clearance certificate from the civic bodies before opening the bridge.

Zala on Sunday claimed that the Morbi municipality gave the hanging bridge to Oreva Group for repair. Due to maintenance, it was out of operation for more than six months. And without informing them, the firm inaugurated it on October 26. He added that before opening the bridge to the public, they did not obtain a clearance certificate from them. Documents show that the Morbi civic authority and Oreva Group entered into an “agreement” in March of this year to maintain and run the bridge. The agreement stated that the private company would bear the full expense of repairing the bridge and opening it to the public following appropriate renovation which would take around 8 to 12 months.

The agreement also stated that for a period of 15 years, or until 2037, the corporate body will be in charge of administration of the bridge, including O&M, sanitation, providing security, payment collecting, maintenance, and deployment of necessary staff at the bridge.

Additionally, Morbi municipality had agreed that the company can charge adults Rs 15 and children under the age of 12 Rs 10 as entry tickets for the first year, with a Rs 2 increase for each succeeding year.

The 765-foot-long and 4.6-foot-wide suspension bridge fell “from the middle” on the evening of October 30 while between 250 and 300 people were on it, according to the First Information Report

In India, Innovation and investment are driving EV adoption by 2030