The PWD reported receiving 84 complaints and attending to 72 of them on Saturday, claiming that only 2% of the roads it manages were waterlogging. Waterlogging after rains leading to traffic jams in Delhi shows the state of infrastructure in BJP-led MCD; why Not Suspend All Seniors Of MCD & Recover Cost From Their Salaries?

Shyam Sharma, the mayor of South MCD, asserted that the majority of the PWD-maintained roads were flooded.

The Public Works Department (PWD) of the Delhi government and the BJP-led Municipal Corporations of Delhi (MCDs) traded accusations over why the roads were flooded and how drains had not been properly desilted as commuters in Delhi battled knee-deep water and impassable gridlocks after heavy rain on Saturday.

The PWD reported receiving 84 complaints and attending to 72 of them on Saturday, claiming that only 2% of the roads it manages were waterlogged.

All three municipal corporations made exaggerated claims that they had finished pre-monsoon desilting work, but a lot of silt still came from their drains. According to a government official, this decreased the PWD drains’ capacity, causing them to overflow and cause waterlogging in numerous locations.

Shyam Sharma, the mayor of South MCD, asserted that the majority of the PWD-maintained roads were flooded.

“Severe flooding affected most of the PWD-maintained roads. The government is avoiding its obligations. It failed the initial monsoon test. According to Sharma, the Chief Minister and his cabinet members only care about politics.

Up until Saturday afternoon, 91 complaints about waterlogging were received, according to MCD officials, from places like Govindpuri, Satya Niketan, Sangam Vihar, and Pushp Vihar. Some areas of Najafgarh, Malviya Nagar, Tilak Nagar, Kalindi Kunj, and Jamia Nagar, among others, also reported waterlogging complaints.

Government representatives also shifted some of the blame to the Delhi Metro Rail Corporation (DMRC), noting that the DMRC was working on construction for phase 3 and phase 4 of Metro lines in some waterlogged areas, including Ring Road, Defence Colony, South Extension, Nehru Place, Sarai Kale Khan, and Okhla junction.

A PWD official claimed that “the DMRC has not been maintaining these stretches properly, despite numerous reminders from us.”

However, a DMRC representative claimed that “areas, where Metro construction is taking place, did not experience severe waterlogging issues. When such incidents are reported, we act quickly to dry out the affected areas. The PWD official continued, “It has been noticed that many traffic lights don’t work during spells of heavy rainfall, adding to the chaos.”

While this was going on, Kapil Mishra, the water minister and chairman of the Delhi Jal Board (DJB), stated, “In one or two places, DJB sewers were clogged, which is a routine thing… We frequently hear reports about clogged sewer lines. We responded to Kalkaji’s complaint and resolved the issue. We receive one or two complaints daily, and DJB teams are dispatched to handle the repairs. However, DJB sewers are not the cause of the waterlogging on Delhi roads.

PWD Minister Satyendar Jain and senior department officials claimed to have carried out “round-the-clock field inspections” to keep an eye on the teams sent out to clear the flooded roads.

PWD teams began responding to complaints about waterlogging at 530 am on Saturday with the aid of mobile maintenance vans. In addition to 529 permanent pumps at… vulnerable locations, the PWD also deployed 202 portable pumps at locations where waterlogging was reported, according to a government official.

Authorities from the traffic police asserted that they had taken the necessary steps to address the issue. “Because we had seen the weather forecast, we were prepared for this scenario. On most major thoroughfares, the traffic was sluggish, but the Indraprastha-Rajghat stretch and Sangam Vihar were the bottlenecks for us. Traffic had to be diverted so that vehicles could avoid the flooded areas, according to Garima Bhatnagar, joint commissioner of police for traffic.

Delhi’s Municipal Corporation has been ordered to pay a compensation of Rs. 9 lakh for waterlogging.

On the first day of the Delhi Assembly session, the AAP and the BJP sparred about the waterlogging problem in Delhi. The AAP accused the Municipal Corporation of Delhi (MCD) of failing to clean its drains, while the BJP blamed the Public Works Department (PWD). He claimed that the MCD and other organizations are responsible for maintaining the remaining city drains, while the PWD manages nearly 2,000 km of them. “People are unsure of the agencies’ authority. In this House, we are unable to defend the PWD and the MCD. Any organization that falsely represents that it has desilted a drain has committed a crime. Action will be taken against the guilty parties if I come across any such cases, Sisodia promised. He also cited a “very poor system” as a result of the merger of the three municipal corporations.

The unified MCD has done away with the director of local bodies of government that there used to be, he continued. Rituraj Govind, Kuldeep Kumar, Sanjeev Jha, and Rakhi Birla, all members of the Aam Aadmi Party, also spoke on the topic of waterlogging and blamed the MCD for it. They claimed that the MCD has been causing waterlogging by improperly desilting the drains under its control.

In response to the AAP, BJP MLA Jitendra Mahajan claimed that the PWD was responsible for maintaining all of the drains but failed to do so, which contributed to the waterlogging problem in the national capital. The PWD’s desilting of drains has been tainted. He said that there should be no politics involved in forming a joint committee to ensure proper drains’ proper desilting.

Abhay Verma, a BJP lawmaker, questioned, “Why are only PWD roads flooded? Rainwater from smaller drains enters larger; clogged PWD drains through smaller drains. The result is that the water overflows onto the roads.

Condolences for the deaths

The brutal beheading of a tailor in Udaipur, as well as the victims of the Mundka fire, the Manipur landslide, and a bus accident in Himachal Pradesh, were all mourned by the Delhi Assembly. Commemorations for those killed in various incidents were paid at the start of the Assembly session’s first day. Ram Niwas Goel, the speaker of the Delhi Assembly, sent his condolences to the families of those lost in the landslide and fire in Manipur.

BJP legislators left the Delhi Assembly on Monday in protest of allegations that the Kejriwal administration had closed schools. Ramvir Singh Bidhuri, the leader of the opposition, brought up the topic of the closure of Delhi government schools during a special mention under Rule 280. The BJP lawmakers persisted in their protest even after Manish Sisodia, the deputy chief minister, responded.

At the same press conference, Durgesh Pathak, who is in charge of municipal corporation affairs, demanded an investigation into the MCDs’ building surveys and stern punishment for anyone found to have engaged in corruption.

The MCDs must carry out yearly building inspections. According to the North MCD’s report, submitted last month and headed by Mayor Jai Prakash, about two out of every 800,000 buildings surveyed are in a precarious condition and might collapse at any moment. Two buildings have collapsed in the northern municipal zone in the previous twenty-four hours. This raises questions about the survey and raises the possibility of fraud. We demand an investigation, and those found guilty must face severe punishment, said Pathak.

Following the Wednesday collapse of a building in North Delhi, one police officer perished and another was hurt.

The mayor of the north corporation, Jai Prakash, responded to Pathak’s accusations by stating that they were completely without merit. I visited the scene of the building collapse yesterday, and I’ve since requested an investigation. Pathak will also receive a legal notice from me for making untrue claims and damaging my reputation.

“Will pass an order to stop senior MCD officers’ salaries,” the HC declares, criticizing the civic body for underpaying teachers.

The Municipal Corporation of Delhi (MCD) was criticized by the Delhi High Court on Wednesday for failing to pay the teachers’ salaries at its schools. The court also threatened to issue an order “for stoppage of salary of all senior officers of the department until their salaries are paid.”

According to a petition filed with the court, the salaries of about 5,000 teachers employed by the former East Delhi Municipal Corporation and working in up to 365 primary schools have not been paid since February. Only on June 22 was the salary for January released, the court was informed on Wednesday.

Why don’t you pay the salary? Do they work for you or not? The fact that you haven’t paid a salary in the last five months is extremely strange. They are educators,” the Chief Justice Satish Chandra Sharma and Justice Subramonium Prasad division bench questioned the MCD.

“Who is the Corporation’s head? We will pass a resolution ordering the department’s senior officers’ salaries to be suspended until they are paid. These officers receive their salaries on time, but these poor teachers do not. It’s really unfortunate,” the court added. 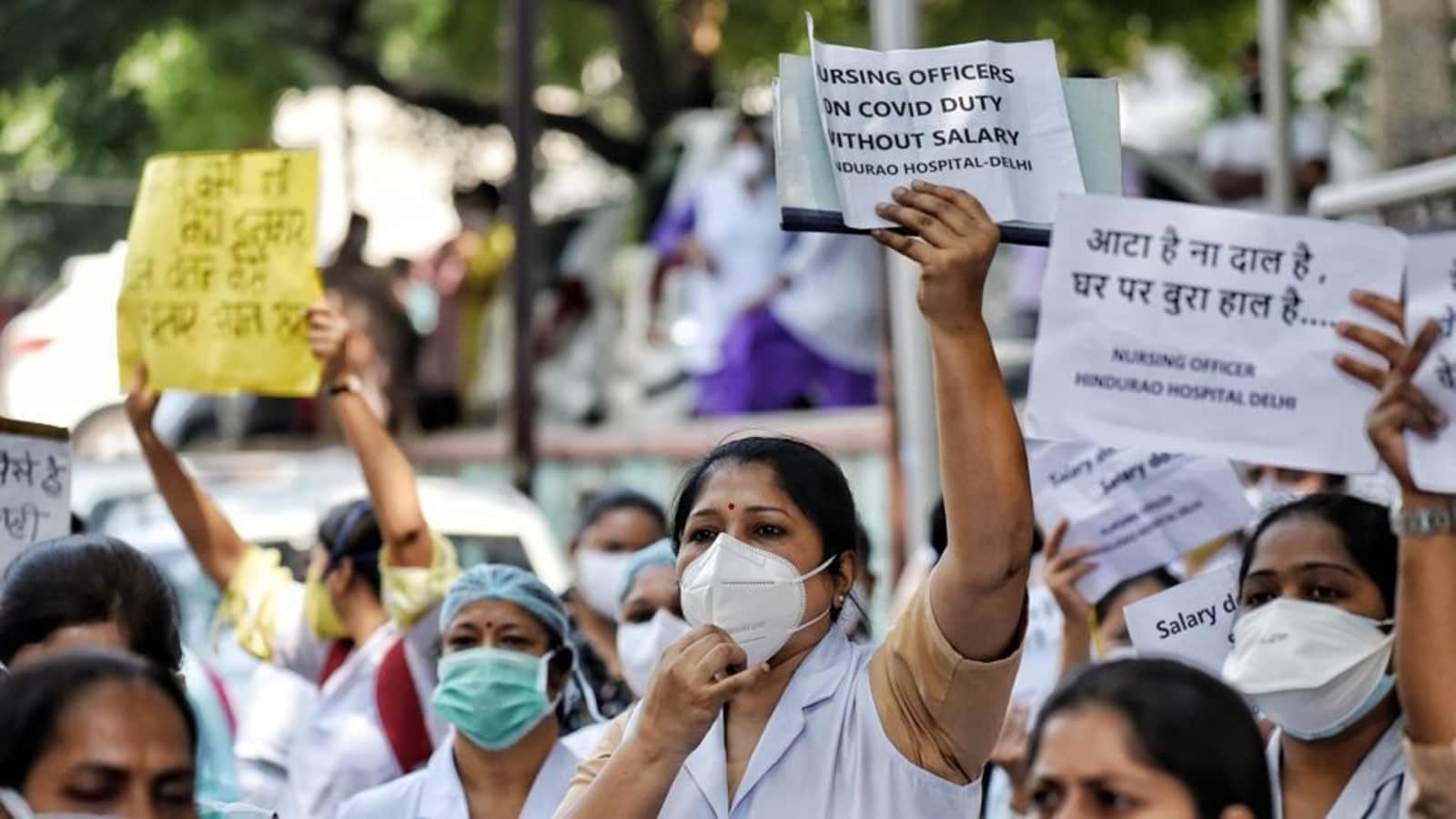 The court requested a statement from the MCD’s legal counsel regarding the commissioner and corporators’ compensation. The counsel asserted that the corporation was also wronged and claimed that even grade-A officers hadn’t received pay since January due to a lack of funds. A hearing on the matter has been scheduled for July 22.

The court ruled that the respondent must make “every effort” to pay its teachers and staff their salaries.

In the petition submitted by Satendra Kumar Nagar and others, through attorney Ashok Aggarwal, it has been argued that the former EDMC’s inaction violates the fundamental right to subsistence. According to the plea, “They (teachers) are unable to pay their children’s tuition, EMI, run their kitchen, etc.”

The National Logistics Policy for the Advancement of India's Growth