India’s own successful fight against this pandemic can be measured against the growing protests against Xi Jinping’s strict zero-Covid policy, which repeatedly shuts down cities and areas if even a few Covid cases are discovered. Not to mention how the Narendra Modi administration has handled other matters.

Since Tiananmen Square in 1989, authoritarian China has not experienced protests of the size and scope we have started to see over Xi’s Covid lockdowns, but it is likely to be another turning point for the nation.

Despite Deng Xiaoping’s crackdown in 1989, the protests did not spread because Deng duly brought about the prosperity he had promised to an underdeveloped country in due course. As China’s growth slows, Xi’s crackdown is doing the exact opposite this time around by destroying the livelihoods of its own people.

The management’s failure to pay promised wages sparked violent protests at Apple’s main iPhone factory in Zhengzhou a few days ago, but anti-lockdown demonstrations have also occurred in Beijing, Wuhan (where the virus originated), Shanghai, Chengdu, and even the heavily policed Urumqi, capital of the Xinjiang province.

India, in contrast to Covid, even dropped the requirement for masking in crowded areas.

People who support democracy, both inside and outside of China, shouldn’t have high expectations. There may not be any easing of the restrictions on people’s freedom of speech and movement despite the widespread dissatisfaction with Xi’s zero-Covid policy.

China is a one-party state, and the ruling party has no plans to relinquish control any time soon. The best case scenario is a successful internal uprising against Xi and a gradual relaxation of Covid control norms by a third party who does not share Xi’s commitment to the zero-IQ policy on Covid containment. Take into account how China handled the last year’s protests in Hongkong for more freedom. It is obvious that the preferred Chinese strategy when dealing with agitated people is to put them down with an iron hand (read here, here, here). Also take into account Iran’s response to female defiance of the hijab, which has so far claimed more than 300 lives.

Again, it is important to compare this to how democratic India handled not only a once-in-a-lifetime pandemic but also the much more disruptive protests against the Citizenship Amendment Act and the farm reform movement.

In both of the latter instances, the Modi administration initially didn’t seem to be taking credit for not repressing the demonstrators, but by letting them disperse on their own, it demonstrated that a democracy is capable of handling an undemocratic protest without resorting to force.

Of course, the government reversed course when it came to the farm laws, but again, this does not entirely justify its pusillanimity. It was made possible by the legislative retreat to avoid having to fire on some of the protesters. It would have supported false anti-Indian sentiments held by foreign politicians and the media.

The Popular Front of India (PFI) and other affiliated organizations, which were outlawed in October, were among the radical Islamist forces it was able to move against more decisively thanks to this retreat.

Compare this to what Canadian Prime Minister Justin Trudeau did in response to truckers’ protests against his own Covid policies after supporting the Indian farm protests. He declared an emergency and put an end to the demonstrations.

Trudeau seems fine with upsetting the economic stability of the general public in India, but not in his own country.

The less said about Covid, the better. Despite having a first-world healthcare system, the US has reported more deaths than India does. Even if Indian deaths are five times underreported (i.e., there were 2.5 million deaths instead of just 5.3 lakh), our population-adjusted mortality rate is still significantly lower than that of the US.

India currently has 6,348 active Covid cases (as of November 28), whereas China is still reporting daily infections that are many times higher, despite its draconian lockdowns. However, India’s performance against Covid is what is held accountable.

The real lesson to be learned, despite the negative narrative that is developing against us in the West, is this: Of course, we must start aggressively telling the West our own story in our own way, but we must also admit that our democracy has benefited us in two ways. 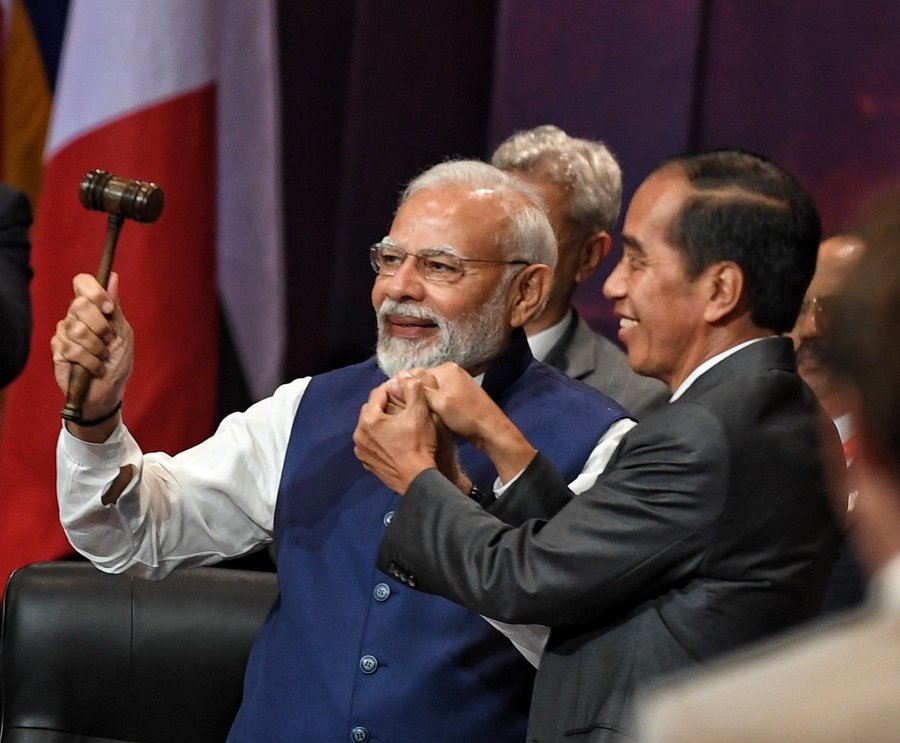 First, we have given a capable government the tools it needs to effectively combat the pandemic by electing it. By stepping up testing capabilities in 2020 and the vaccination program in 2021, we achieved this first. Vaccinations have now been given to nearly 2.2 billion people.

Second, the government has been able to correct course when things seem to be going wrong thanks to our vocal democracy. For instance, after Covid lockdowns made it impossible for migrants to make a living in cities, they began to walk back to their villages. After some hesitation, the government eventually made sure that everyone returned home using public transportation.

The opposition din forced the government to course-correct its vaccine policy in 2021 when the Delta wave hit us in the solar plexus, hastening their development and deployment by the end of the year (not that it had any better solutions to offer). Omicron experienced high infection rates but much fewer fatalities as a result. Our active population is probably low by any standard because of this.

This does not imply that we have overcome our Covid difficulties. Nobody can affirmatively state that. Even if we make mistakes at first, the increasing competence of the Indian state and our democracy ensures that we will get it right the next time as well.

On the other hand, without a coup or harsh crackdowns, Xi’s China is unable to make course corrections.

Indian democracy scores higher on IQ and EQ than Chinese authoritarianism, which scores zero (emotional quotient). In the face of evidence, we are incapable of being stupid.

A massive coronavirus resurgence in China is wreaking havoc on the lives and livelihoods of an estimated 400 million people. Anger is rampant, and China’s growth rate, currency, and stock markets are all falling.

While the pandemic situation has gotten worse in Shanghai, a city with a population of 25 million, it is also posing a threat to Beijing, a city with a population of 20 million and a Chaoyang district that has been placed under lockdown. Since the Wuhan lockdown, China’s leadership has extolled the virtues of its “Zero Covid” policy and is now making an effort to explain to its citizens and the rest of the world why infections have increased and why they are being forced to bear the overall disproportionate costs.

China reported only 120,000 infections and 4,000 or so deaths during the pandemic, which killed six million people worldwide and infected half a billion. These numbers are suspect due to the complete lack of transparency. According to the same opaque official statistics, infections are now reportedly up to 900,000 and are affecting nearly 50 cities.

In a white paper published in June 2020, China credited President Xi Jinping’s “personal command” and “decisive” leadership for the country’s “victory” against the virus’s spread. Although the then-Mayor of Wuhan had claimed that more than five million people had left the city before it was locked down on January 23, 2020, it also mentioned the “swift, effective and comprehensive” response for containing the virus across the nation.

China then launched one of the world’s most extensive holier-than-thou propaganda campaigns, criticizing democracies for being ineffective and downright callous in their response to the pandemic. China also took pride in its “Zero Covid” policies of complete lockdowns, app-based intensive surveillance, and intrusive behavior.

China insists on adhering to its strict Covid policies despite the current outbreak of the disease across the nation because it believes that the Communist Party’s political legitimacy is being called into question more and more.

The Communist Party tied its legitimacy to maintaining economic growth rates after the 1989 Tiananmen Square protests, which, of course, have fallen from an estimated 14% in 1994 to 10% in 2010 to 2.2% in 2020. The Communist Party’s new objective now is to control the virus, at the expense of people’s livelihoods and aspirations.

Naturally, the internal blame game is also changing. Vice Premier and Politburo member Sun Chunlan, who has been leading the Covid-related campaign since late 2019, claimed that Shanghai lacks a “solid foundation” for its work to combat epidemics.

Political factional conflicts are getting worse as the 20th Communist Party congress is scheduled to take place in November. Li Qiang, the leader of the Shanghai party, as well as others may be “disciplined,” while Xi Jinping may avoid calls for political accountability over the pandemic’s spread throughout the nation.

Despite 85% of the population receiving the vaccine, the virus has spread, suggesting that it is ineffective even though the Covid death rate may be low. In fact, Brazil discovered that vaccines from China were only 54% effective. The unevenness of China’s vaccination campaign, which excluded the elderly and people living in remote areas, was also criticized. Given its earlier demonization of vaccines, China also rejects imported vaccines.

The economy has suffered greatly as a result of the “Zero Covid” policy. In 2020, China’s growth rate dropped to 2.2%, but it rose to 8% in 2021. The IMF’s 4% forecast for this year is significantly less than China’s own target of over 5%. On April 29, the Politburo made a stimulus announcement. The stock exchanges in Shanghai and Shenzhen have plummeted. In 2020, the China Securities Index 300 was over 5,211 points; as of today, it is just over 4,016 points. Due to the “Zero Covid” lockdowns, production is still being disrupted at Foxconn, Tesla, and other factories. The demands of Xi’s “common prosperity” campaign have prevented the real estate and technology sectors from recovering. Investors are relocating.

As a result, while many nations have successfully experimented with mass vaccination, herd immunity, and relative and non-lethal dispersal of the virus, hundreds of millions of Chinese people are finding their patience strained by the country’s strict lockdowns.

Looking Ahead: What Holds The Future of Malaysia Sports Betting Law in 2023

According to PM Modi, the G20 Summit will focus on reviving global growth: a 10-point summary