Since the onset of the Covid 19 pandemic, the economic situation of all the major countries and leading powers have faced drastic downfalls. The lockdowns and the abrupt pause on almost all the financial affairs led to an imbalance in both global economic scenarios and domestic economic situations. India is one of the significant victims’ countries that suffered economic disaster the most.

According to the official data provided by the ministry of statistics and program implementation, the Indian Economy collapsed by 7.3% in the April-June quarter of the current fiscal year. This is the worst decline ever witnessed since 1996 when the ministry started compiling statistics of GDP quarterly.

In 2020 after the onset of the pandemic, an approx of 10 million migrant workers returned home after the lockdown was announced. A million of them lost their jobs. Daily wage workers struggled to return home. Many couldn’t, but the astonishing fact that none of the authorities, the state government or the central government had any data related to the daily wage labourers and workers. They lost their jobs and their lives during the lockdown. The second wave of Covid-19 has brought to light the worsening existing flaws in the Indian Economy. India’s 2.9 trillion dollar economy went gushing down during this lockdown period, other than some essential services and activities such as shops, eateries, factories, transport services, business establishments were collapsed. The lockdown had a destructive impact on the Indian Economy.

The informal sectors of the Economy have faced the worst hit by the global epidemic. India’s GDP count in April-June could have been well above 8% if the informal sectors were taken into account. Private industries and investments are the two most prominent pillars of country’s economic growth. All the major industrial sectors of the Economy were majorly affected except the agricultural sector.

The Indian economy was facing a decline much before the second wave came crashing on the way. With the humanitarian crisis, poor organization, and maltreatment of the government, the covid-19 exposed the existing potholes in the Indian Economy. Experts believed that this collapse of the Economy would keep going in the next four quarters, and a recession is inevitable.

Recently after the drafting of the financial reports of the new financial year, the country’s GDP is on its way to growing at 9.1 per cent in 2021-22. This is a significant economic recovery, post the disastrous effect of the waves of the pandemic, which seems to be holding ground.

As per a report provided by the Federation of Indian Chambers of Commerce and Industry, the rapid recovery of the Indian Economy is awestruck. Ficci’s Economic Outlook Survey noted that the festive season in the country would support this growth and help the GDP increase. But still, due to the celebration that is going around the country, experts fear a rise in covid cases all over again.

The Chamber said, as quoted, “The latest round of Ficci’s Economic Outlook Survey has kept in forward an annual median GDP growth forecast for 2021-22 at 9.1 per cent. This marks a marginal development from the growth projection of 9 per cent recorded in the previous survey round (July 2021).”

The Economic Outlook Survey has been going on since the July-September period. This is when the agricultural sector made some promising progress that ensured growth in the degrading Economy of the country.

While the survey was conducted, the financial representatives and institutions gave their opinions on the estimated growth of the Economy of the country. The Reserve Bank stated, “second quarter GDP data and the omgoing festive season should give a better image of where we are headed on the recovery path and how the demand situation is panning out,” 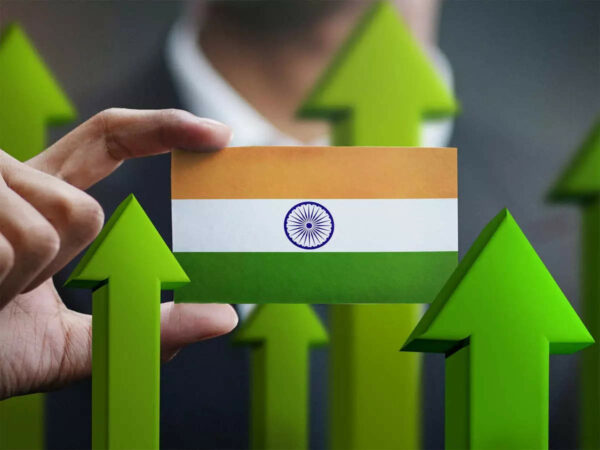 Ficci, after concluding the survey, has observed that for India to return to its normalcy, the RBI needs to make a few amendments to support this growth. It is on the agenda of the RBI to conduct a meeting in February 2022 during the onset of a new financial year.

Commenting on the survey conducted by Ficci, the Reserve Bank of India stated, and as quoted, “However, a upsurge in the repo rate only looks at hand in the next fiscal year that is somewhere in April 2022. The path towards positive real interest rates is expected to be a staggered one. Much would be contingent on the build-up in domestic price levels and the extent of tapering by the Federal Reserve.”

The Economy of India is the largest growing market economy in the world, currently being the 6th largest Economy and South Asia’s most significant. The impressive recovery of the country’s economy post covid has been a relief to all the dwellers. A lot is yet to be done. During the lockdown, many industries faced significant setbacks, which are still affecting the country’s financial condition.

The domestic markets, global Economy and financially interdependent countries await the complete recovery of the Indian Economy. The sooner the target gets achieved, the better it is for the country.

3 examples of wall stickers to transform your room