Summer is here. Everyone wants to drink something extraordinary in this hot weather like pepsi, coca-cola, and no one can resist the temptation to do so. Today, we have many options for packaged non-alcoholic drinks that aren’t just fruit juices or carbonated drinks.

People in India used to drink one of four things: aerated drinks, coconut water/buttermilk, fruit juice, or Rooh Afza. The choices have changed a lot since the 1990s. If your were lucky, your host might even have all four.

However, that has changed a little bit, but not very quickly.

Millennials and Gen-Zers drink more alcohol and other drinks than older generations do. But they are also a lot more concerned about what they eat and how they stay healthy. Having a drink with your meal at home or in a restaurant has become more common because people have changed how they eat and how much they spend. There has been a rise in low-sugar soft drinks like Pepsi, Coca-Cola, and so on. 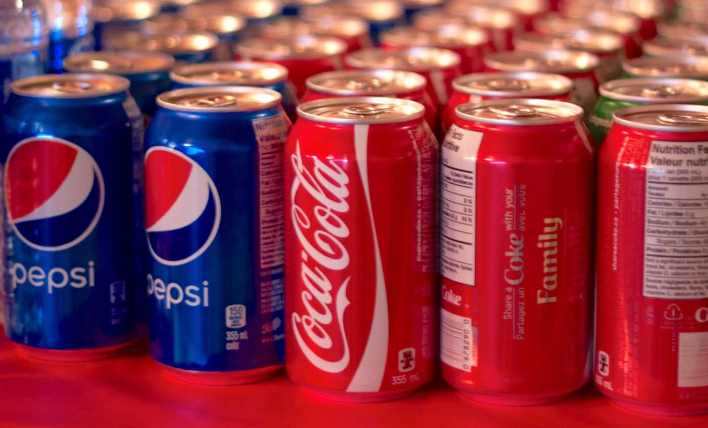 “Coconut water, buttermilk, and cold coffee are usually my go-to summer soft drinks,” says the woman. I drink these drinks at least a few times a week. Now and then, I’ll have a Nimbooz, Thumbs-Up, or a juice made from fresh fruit. Tanushree Agarwal, a 30-year-old product designer in the Mumbai area, said this:

Many people younger than 30 will say the same thing when you ask them this question. Because it’s so simple: Is there a reason to drink sugary drinks?

Even though it is a hot country, India is one of the world’s most minor drinkers. However, this may soon change. Most big beverage companies think India has the best chance of growing the most. The country is the fifth-largest market for Coca-Cola, made in the United States.

Legacy companies like Coca-Cola, PepsiCo, and Dabur are still the leading players in the soft-drink market.

Still, the rise in popularity of low-sugar drinks has opened up the market to New Age companies, bypassing the entire distribution network and winning the hearts of consumers.

The soft-drink (Pepsi, Coca-Cola, Dabur) market is split into carbonates, broken down into cola and non-cola carbonates and non-carbonates. This is broken down into fruit juices, bottled water, concentrates (Rooh Afza and the likes), ready-to-drink tea (iced tea), and sports drinks. 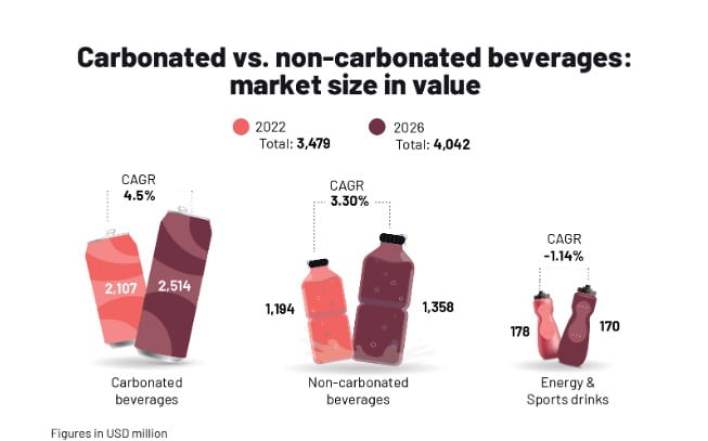 Industry sources say carbonates are the main thing that adds value to the soft-drink (Pepsi, Coa-Cola, Dabur) market in terms of money. Juices and bottled water make more money than carbonates in terms of volume.

Carbonates can be found in every grocery store. There are a lot of Coca-Cola, Pepsi, Dabur, ITC, Parle Agro, and other brands of soft drinks in general-purpose stores and modern grocery stores like Big Bazaar. Most of the options on the market now have a lot of sugar, and a quick look at the calories in carbonated drinks and fruit juices will show how much sugar they both have. And today, people are paying attention to these labels.

The company that distributes PepsiCo India’s drinks, Varun Beverages, said in its 2016 annual report that “at 44 bottles per person in 2016, the soft-drink (Pepsi, Coa-Cola, Dabur) market in India is relatively under-penetrated,” it’s not very well-known. The company thought the number of bottles would rise to 84 by 2021. However, even back then, juices and bottled water were likely to be the primary sources of growth.

Over the last five years, carbonated drinks haven’t made up nearly as much of Varun Beverages’ soft-drink sales as they used to. 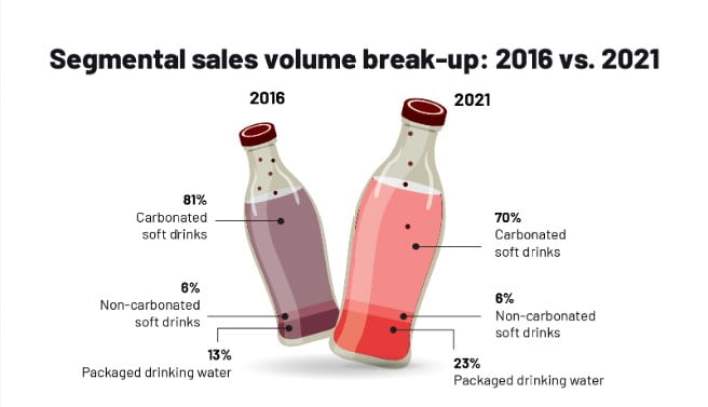 Arnab Roy, the vice-president and head of marketing for Coca-Cola India and Southwest Asia, says there hasn’t been a drop in the sales of carbonated drinks. As long as Covid-19 isn’t an exception, Coca-Cola India’s sparkling (carbonated) category has been on a long-term growth path.

Roy says, “Coca-Cola India is seeing a rise in consumer demand and strong growth across all three categories: sparkling, hydration, and juices. This is good news for us.” India is now the fifth-largest market for Coca-Cola, but soon it will be the third-largest. 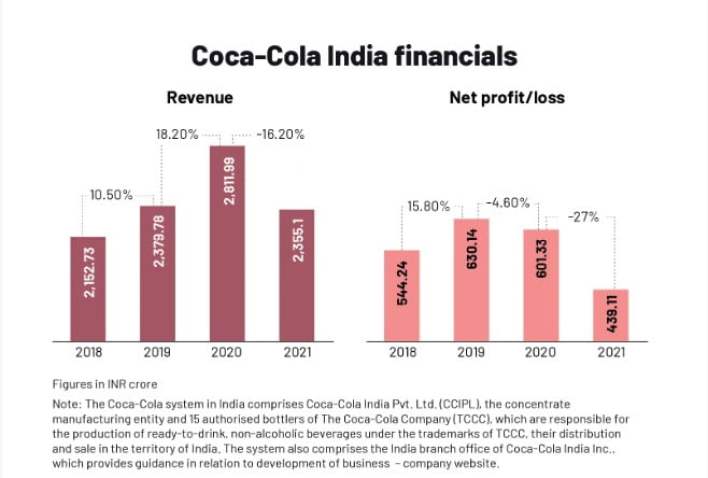 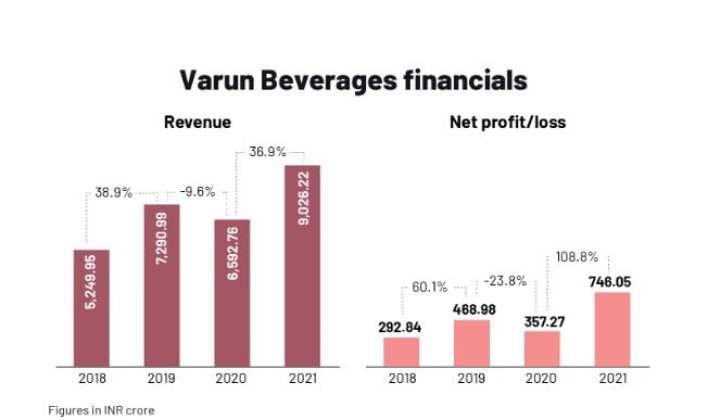 As long as the company doesn’t see a drop in carbonate sales, the industry leader is looking for new markets to get into.

In 2020, Vio, a brand of spiced buttermilk, was launched. This product was first released in 2016, but it was put on hold for a while. In the pandemic, it was relaunched to help more people. Coke Zero Sugar was relaunched in March 2022. (earlier launched in 2014). Also, the company has Fanta Apple Delite, a carbonated apple juice that has less sugar than other apple juices.

The rise of players who play in the New Age genre.

People have been getting more and more interested in drinks that aren’t as sweet for a few years now. The trend began before the pandemic and continued for a long time. Real Fruit Juices owner Dabur has been working on cutting back on its sugar content since 2018.

Dabur is a big player in the fruit juice market, and it owns the Real Fruit Juices brand. The company cut the sugar content in two-thirds of its drinks to 5.4 percent in FY19. By the end of FY20, it had cut the same for half of its portfolio by 7.5%.

There were also a lot of New Age players who were able to play because of the pandemic. With the rise of Dunzo and the D2C channel, these new-age soft-drinks brands are flooding the market, making it hard for people to choose.

It was started in Delhi in 2015, and it makes tea. The company makes iced tea in a ready-to-drink format. It comes in almost ten different flavors, such as peach and forest berry, mojito lime, lemon and apple cinnamon, strawberry hibiscus, mango, ginger turmeric, etc. Everyone can get low-sugar iced teas.

The organic tea we use is powerful, and we work with it. You don’t need to add any preservatives because it is cheap and easy to store, and tea also doesn’t have any calories by itself. If we want to launch a zero-calorie or very-low-calorie product tomorrow, we can do so. One of the categories has already been cut down to 5% sugar.

Even though the market was already consuming about 8 percent of the sugar we used, we also added more because that’s what we thought. People at Brewhouse Tea Brewing Co. also plan to make a green tea drink with 4% sugar.

Jain says, “The market is now where people still want some sugar in their drinks.” They want other things, though, and they want it to be all-natural and preferably not carbonated. “In the long run, as the market moves away from unhealthy options, we can make more products to meet the demand.”

Jain thinks that the health benefits of any soft drinks like pepsi, coca-cola are essential right now, not just low sugar, and it could be for the gut, which helps with digestion.

Taking on challenges
The reach and distribution of the FMCG industry are the main factors that make this industry what it is. Companies like Coca-Cola and PepsiCo have the broadest reach in the soft-drink market in the country. Also, they sell well and are seen even in small stores because they are so cheap.

Jain says, “With new-age brands like ours, the online channel is beneficial.” So people moved to the internet because there was a pandemic at the time. We don’t have to be in many stores to get attention through this channel. Because our products are so expensive, the store and its customers might not be the right match.

The price for a 350ml bottle of Brewhouse Tea is INR 80. On the other hand, Coca-Cola costs INR65 for a 1.25-liter bottle of the drink. The key to success in this market (Coca-Cola) is to reach as many people as possible at the right price point. However, 50 percent to 60 percent of the brand’s total orders come from customers who have bought from them before and shop for the brand online.

In the case of Brewhouse Tea, the D2C channel is still not very big. A big part of the reason is that the product is heavy, and the ticket sizes aren’t too big. In FY21, the company made almost INR2 crore in sales. 20% came from food outlets and movie theatres, and the rest came from retail.

If you want to buy brewhouse tea, you can buy it at Inox and Carnival Cinemas. However, the pandemic has kept them out of business for two years. 40% of sales were made through D2C and marketplaces combined within the retail section. The rest of the sales were made in person.

It covers retailers like Amazon, Big Basket, Zepto, Grofers, and Swiggy, who work with the online channel. That’s how much the company says it will make at the end of the year.

In this case, the Local Ferment Co is one. Bengaluru is home to a microbrewery and kitchen that makes jun, shrub soda, and ginger beer. The company specializes in foods and drinks that are good for you.

You don’t have to drink only kombuchas and iced tea to see the market grow right now. It’s also a big problem for the soft-drink brands (Pepsi, Coca-Cola, Dabur) that have been around for a long time in India because there are more and more non- and low-alcoholic beers. It’s been a couple of years now, but alco-bev companies have been crowded into the soft-drink market and competing with companies that make other products.

It’s common for people who live in the “New Age” to look for refreshing and tasty drinks. The popularity of cocktails has grown over the last five years, and bartenders have played a big part in figuring out what people like and don’t like. A press release from Diageo says that people are getting pickier about what they put in their mixed drinks. “They want mixers to make their drinks taste better,” says a Diageo vice-president.

However, the biggest problem for new-age brands is that people drink soft drinks (Pepsi, Coca-Cola, Dabur) outside of the house in the United States, which is terrible for them. Out-of-home consumption includes sales to schools, businesses, movie theatres, and so on and sales to restaurants, bars, and food stores.

Market leaders have a deal with bigger businesses and don’t allow other brands to be sold at the same store at the same time. Domino’s Pizza India agrees with PepsiCo India, and McDonald’s has a deal with Coca-Cola India. So, unless you develop an entirely new product that they don’t already have, it’s tough to get into the institutional sales channel.

It was closed because of the pandemic so that no one could use it. However, this is where there is a lot of competition. For soft drinks (Pepsi, Coca-Cola, Dabur), about 50:50 of people drink them at home and away from home, sources in the soft drinks business say: It may have been easier for New Age companies to enter the soft-drink (Pepsi, Coca-Cola, Dabur) market because of the pandemic. As business gets back to normal, the impact of these new products will be seen as people get back to their everyday lives.

Power of compounding in 2022, Know everything.

Why is the approval of the first malaria vaccine a watershed moment in the fight against parasitic killers?