The repercussions of uncontrolled growth that occurs without consideration for its influence on the ecology have been underlined by the subsidence in Joshimath, which has damaged homes and put the lives of locals in peril.

This has lessons that extend much further than the hill town that operates as a gateway to revered pilgrimage locations like Badrinath and Hemkund Sahib. Even though the government has suspended all buildings, 600 houses started to develop cracks a few days ago, and some geologists think the city is beyond repair.

What may have caused Joshimath to sink 5.4 centimeters in just 12 days? Satellite images of Joshimath released by the Indian Space Research Organization’s National Remote Sensing Centre (NRSC) and a new insight on ground subsidence suggest that the entire village may collapse. The pictures were taken by the Cartosat-2S satellite.

The NRSC, located not far from Hyderabad, has made aerial images of low-lying areas available. From what can be seen in the pictures, the entire town, the Narasimha temple, and the Army’s helipad have all been labeled as danger zones. Using the initial data from ISRO, the administration of Uttarakhand has initiated rescue efforts and the relocation of inhabitants from potentially dangerous regions to better alternatives.

According to the analysis, Joshimath’s elevation dropped gradually from April to November 2022, a period during which it plummeted by 8.9 cm. Nevertheless, the intensity of ground subsidence increased between December 27, 2022, and January 8, 2023, and during that time period, the town sank by 5.4 cm. These events occurred over the course of 12 days.

Satellite imagery shows that the subsiding ground is also to destroy the Joshimath-Auli route. Although experts are currently examining how the ground beneath the settlement began to collapse, the preliminary outcomes of the ISRO research are concerning.

Subsidence: What is it exactly? 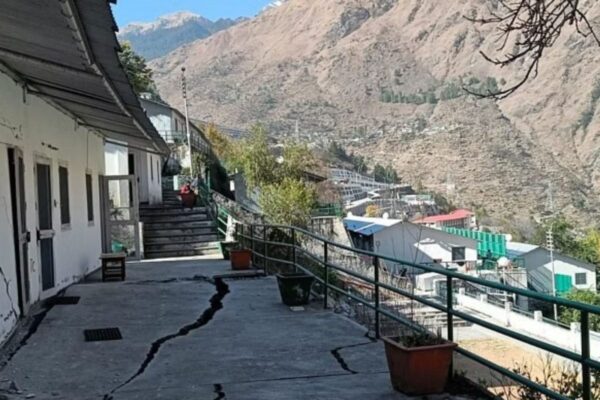 According to the National Oceanic and Atmospheric Administration, subsidence is the term used to describe the “sinking of the ground due to subterranean material movement” (NOAA). It can be triggered by a wide variety of natural and anthropogenic events, such as mining activities or the depletion of water, oil, or other environmental assets.

There are considerably recognized causes of subsidence, such as earthquakes, soil degradation, and soil structure. According to the website of the US-based organization, this phenomenon “happens over very huge sites like whole states or provinces, or very small areas like the corner of your yard.”

When did Joshimath start to sink, and what could be causing it?

Although the precise origin of the soil subsidence in Joshimath is still unknown, scientists hypothesize that uncontrolled construction, excessive population, restriction of the natural flow of water, and hydropower activities may have contributed to it.

In addition, the region is in a seismic zone, which makes regular earthquakes likely. The MC Mishra committee report, which highlighted uncontrolled development in the region that already had natural vulnerabilities, initially raised alarms for Joshimath nearly 50 years ago.

Joshimath city was constructed on historic landslide material, which means that it sits on a deposit of sand and stone rather than rock, which has a low load-bearing capability. Additionally, the scarcity of a suitable drainage system might have contributed to the area’s sinking. The water collects, seeps into the rocks below, and softens them.

In addition to the previously mentioned potential causes, reports have suggested that Joshimath’s subsidence may have been brought on by the reactivation of a geographic fault, which is defined as a fracture or zone of fractures between two blocks of rock, along the Himalayas, where the Indian Plate has pushed under the Eurasian Plate.

Joshimath Incident is cause for concern: Group action is required 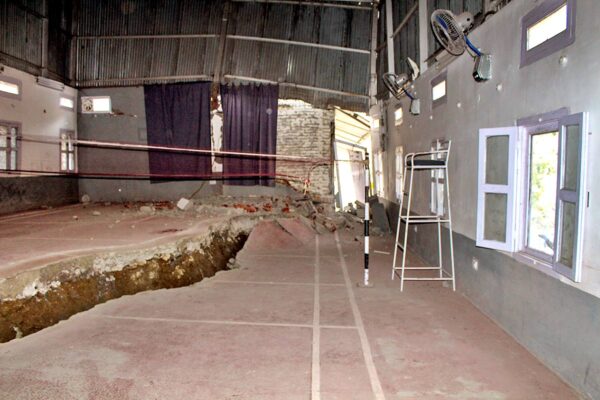 The most recent disaster to strike Uttarakhand, a state in the Himalayas, was the sinking of Joshimath. Although these disasters have been brought on by climate change, poor planning and a lack of vision are the main causes.

We have had sufficient warnings from nature about the hazards in the Himalayas. According to government records, more than 5,000 people died in the 2013 Kedarnath floods. Up to 8000 people died in Nepal’s 2015 Gurkha Earthquake. Millions of people in Pakistan were left homeless and devastated by the recent floods.

Both domestic and international media have covered the “Joshimath sinking” phenomenon. However, other villages and cities in Uttarakhand are also under threat of collapsing. Joshimath is the first to give in to pressure from people, mercifully without endangering any human lives.

Joshimath’s demise may have been tragic, but it has sparked fresh dialogue on how to best plan for migration and emergency evacuation. Some holy transits, like the Prayags that perch perilously above river confluences, and congested cities such as Nainital, Mussoorie, and Pithoragarh may not allow for this.

Both the scientific community and the general public are aware of Uttarakhand’s fragile geology. People aren’t allowed to build homes on precarious slopes according to government regulations and bylaws. The foundation for the geological and environmental understanding of the Himalayan region is laid by the premier research institutions and universities in Uttarakhand.

Access to data and evidence is useless unless it is carefully analyzed, made useful to implementers, and put to use. For bureaucrats, understanding scientific terminology and academic jargon are difficult, and they only interact with the research community in a necessary and superficial way.

Such Were The Times

Additionally, traditional and indigenous knowledge are abundant in Uttarakhand. Due to our blatant indifference and lack of faith in time-tested techniques that have been effective for millennia, the art and craft of natural resource management are swiftly fading.

We have kept implementing methods from other places on the sensitive eco-geological systems of the Himalayas. Gurugram itself suffered as a result of the infrastructure development. Gurugram-style development is incredibly destructive to the Himalayas. Stopping the “Gurugramization” of Uttarakhand is necessary.

Due to a lack of communication, the general public often makes judgments that don’t take scientific evidence into account and often disregards established norms and regulations. Everyday existence for an average Uttarakhandi is fraught with anxiety and doubt.

Nainital on the Verge Consider Nainital, one of the Himalayan region’s cities with the greatest vulnerability. The Nainital lake is bordered by landslide-prone slopes and is positioned over an active faultline. It lies in an area with a high risk of earthquakes (Zone IV). Since the city was founded in 1841, both little and large landslides have threatened it. The 1880 landslide, which asserted 151 lives, was the worst of them all.

Even though there is solid scientific data, building ordinances, and informed citizens, the city’s biophysical environment is nevertheless being brutally attacked. More than 15,000 people today live on the slope that fell in 1880 (less than a fraction of a second earlier on a geological time scale).

The water table in Nainital plummeted 18 feet in 2017 as a consequence of increased water withdrawal from the lake bottom to support local and unprecedented visitor demands. This descent is unprecedented. “Balianala” threatens Nainital most. Adding insult to injury, construction is taking place above “Sukhatal,” the lake’s principal recharge area near Nainital.

To boost tourism. It’s fair to wonder if a city that already sees over 10,000 visitors and 2,000 cars on weekends and holidays need even more visitors. Especially after the city’s carrying capacity has been reached? The natural infrastructure is worn out, and there are risks of a potential collapse that are apparent to the naked eye.

Uttarakhand must immediately review its development strategies. Better decision-making will be made and an atmosphere of shared ownership and vision will be created by promoting a collaborative culture and interdisciplinary thinking. A problem has arisen as a result of our joint failure. Work as a team or prepare to sink as one.

Income Tax Act in India is obscure, antiquated and outdated.

Air India's ' Pee-Gate' Incident - Our Lives In Their Hands? An Example Of Unpreparedness And Lack Of Correct Training And Why We Should Be Worried?