Due to the spotlight on decreasing the carbon emission and making it zero by 2050, India has been focusing on its transportation sector. It aims to replace fossil fuel powered vehicles with Electric ones.
To achieve the target of Paris Agreement of 2015- decreasing global warming to below 2 degree Celsius- countries have been investing in green fuel and energy sources.

India is quite late to enter this bandwagon. However, if the country aims to meet its Nationally Determined Target (NDC) according to the Paris Agreement by 2030, it needs to take proactive steps towards reducing its carbon footprint. In the present scenario, India has achieved a little less than 50% of its target.
One important step towards meeting the NDC and decreasing the dependence on petroleum is the National Hydrogen Mission that was launched along with the Budget of 2021-22. As a measure to bolster the production of green energy, a capital infusion of 1000 crore rupees to the Solar Energy Corporation of India and 1500 crores to the Indian Renewable Energy Development Agency has been announced.

Objectives of the National Hydrogen Mission:
The National Hydrogen Mission, aims to work towards making India achieve its target of decreasing carbon emissions and increasing the Carbon-di-oxide sink in the country. The main objectives are:
1) Reduce Petroleum Use
2) Reduce the emission of Green House Gases
3) Diversify and increase the efficiency of energy infrastructure.
4) De-carbonise heavy Industries like steel and cement Industry.
5) Promote clean electric mobility and replace petroleum powered vehicles.

What is Hydrogen Economy ?

Hydrogen is called the ‘fuel of the future’ and rightly so. Hydrogen Fuel Cell powered electric vehicles might become the vehicles of the coming generation.
Hydrogen Economy refers to the use of Hydrogen to store clean energy and decrease the carbon footprint. There is hope that a carbon free future will be Hydrogen powered.
Since, Hydrogen is 8-10% more efficient than petroleum, it will be a good alternative.
Hydrogen is abundant in the atmosphere but being highly reactive it is only found as a part of different compounds in the atmosphere. Hence, it has to be extracted efficiently.

The Brown and Grey forms result in high carbon emissions during the process of extraction of Hydrogen. Thus, these two forms are not being promoted by any country where Hydrogen is currently in use.

Blue: This type also revolves around extraction of Hydrogen from Fossil Fuels. However, the Carbon emitted will be stored and used for developing high quality carbon materials. Hence, utilizing the byproduct too.
Green: Extraction of Hydrogen from water through electrolysis does not emit as much carbon. When electrolysis or any other kind of extraction is carried out using renewable energy sources like wind and solar energy, it is called Green Hydrogen. However, the cost is higher due to use of expensive catalysts; and clean water is not very abundant.
A method that was discovered recently to reduce the cost is the use of Cobalt and Nickel Oxide spiked with Gold nano particles. It creates a stable inexpensive catalyst to split water and produce hydrogen without a lot of emissions.
A new method of extracting hydrogen from methane in the air through a process known as ‘reverse processing’ can help in significantly reducing the methane content in air. 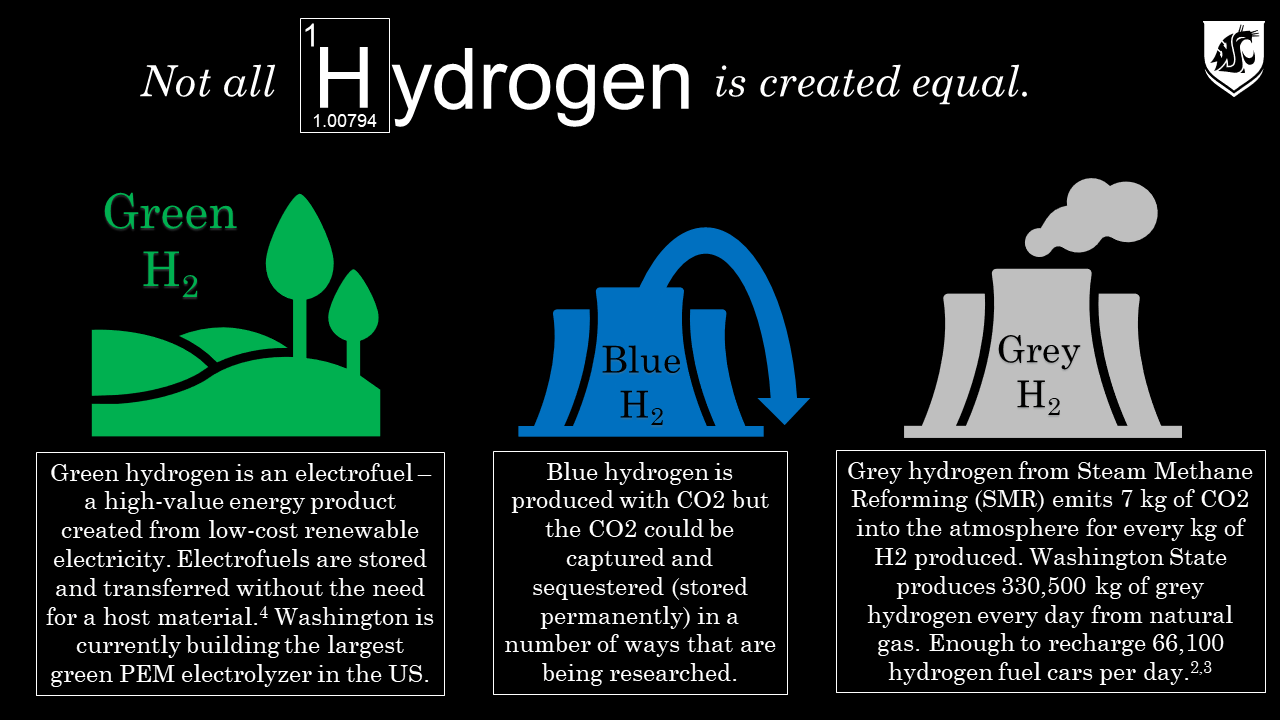 Developments in the sector of promoting Hydrogen Economy in India:
i)Tata Motors is currently developing and testing Fuel Cell Buses which might be ready to be on the roads within a year.
ii)Indian Oil is serving to its customers Hydrogen spiked CNG, which greatly increases the efficiency and decreases the carbon emmissions.
iii)Reliance plans to develop the largest Hydrogen Refinery in India by 2035.
iv)Adani is working on a plant which will produce Hydrogen through electrolysis of water.

Hydrogen can store renewable power for longer periods of time. It is a clean fuel with zero carbon emission. What caught the attention of automobile developers was that Hydrogen can hold a lot of energy in a small volume. The energy released by one kilogram of Hydrogen is equal to 1 gallon (3.79 litres) of gasoline. In addition, it is 2-3 times more efficient.

How is Hydrogen Fuel Cell better than Lithium Ion battery?

ii)Storage: Hydrogen has five times better energy storage than traditional automobile batteries. This means that there is more room for passengers and storage of other commodities in a vehicle. Moreover, it can store energy for longer periods of time.

iv) Lack of Lithium Deposits in India: India has been dependant on Lithium imports, since Lithium deposits in the country are scarce. Although, a deposit was discovered in Karnataka recently, it will not be able to provide for the rise in demand for Electric Vehicle batteries in the coming years.

What are the Challenges?

India has to overcome a lot of hurdles in the process of adoption of Hydrogen as a fuel.

The first and the foremost is the Cost: The cost of extracting Hydrogen from the compounds it is present in, is expensive. Green Hydrogen Plants need to be built across the country. The production cost itself will be huge.
Furthermore, since the technology is new the Fuel cells will be expensive and hence will increase the cost of the vehicles. A hydrogen fuel cell-powered vehicle will be approximately two times more expensive than a battery powered one.
Scaling down the cost will take time.

Lack of fuelling infrastructure: Refuelling might take less time but developing the infrastructure would take ample amount of time

Safety: A major concern with Hydrogen is that it is highly flammable. Hence, developers were apprehensive of the tech, in the beginning. However, the car manufacturer, Toyota displayed an experiment in which it fired a bullet to its hydrogen tank. The bullet ruptured the tank and Hydrogen escaped into the atmosphere without causing any hazardous situation. The reason is that Hydrogen is lighter than air and hence when released it simply rises up and vanishes into the atmosphere.
This solves the problem of flammability. However, other provisions need to be installed in case of an unforeseen circumstance.

Loss in efficiency: The processes of extraction, compression, transportation, conversion into fuel cell and finally being used in an electric motor; reduces the efficiency of Hydrogen vastly. Studies suggest, when hydrogen is ready to use in automobiles, it has lost 70% of its efficiency.

Although, this might take some time and a considerable amount of effort and planning, the move is welcomed. If this is not another one of the ‘unplanned missions’, Hydrogen Economy can vastly help India reduce the dependence on imports of Fossil Fuels. However, what is required of the citizens is patience and an open mind towards an emerging technology. Initial apprehension towards any new tech is acceptable but promoting Hydrogen Fuel Cell is an uphill task that needs good research about the mindset of the citizens.
Technical challenges to Hydrogen Economy can be overcome with good research and development. Other issues like cost can only be reduced over time. However, the government should make sure that incentives and subsidies are provided in the early stages. This will increase the demand of the vehicle.
The government’s decision to partner with Hydrogen Council, European Hydrogen Corporation, and automobile giants of the country can prove beneficial if implemented strategically.

While Unraveling the overhaul of the Atma Nirbhar Bharat Abhiyan, Has the Government Stood Up to the Expectations of the Citizens? Here's everything that you need to discover