Bond yields increased six basis points in tandem with a decline in global equities as a result of the Federal Reserve’s hawkish tone at Jackson Hole, while the Rupee broke through the 80-to-a-dollar threshold and established a new record low. At 9.30 am, the local currency was down 0.25 percent from its earlier estimate, trading at 80.03 versus the US dollar. The Rupee hit a record that is low against the dollar of 80.13 after opening at 80.07.

The yield on 10-year bonds jumped from its previous level of 6.21 percent to 6.27 percent. Prices and bond yield move in opposite ways. South Korean won fell by 1.3%, the Thai Baht by 8%, the Japanese yen by 0.64, China Renminbi by 6%, the Taiwan dollar by 6%, the Malaysian ringgit by 5%, the Indonesian rupia by 0.43, and the Singapore dollar by 0.34 percent among Asian currencies.

In addition to reiterating the US Fed’s unwavering commitment to fighting inflation, Chair Powell highlighted the risks associated with rising and protracted periods of rapid price growth. Short-end and 10-year rates that are rate-sensitive increased in response, and stocks had a steep decline.

“Powell performs up to our standards at Jackson Hole. We were generally satisfied with Chair Powell’s remarks at the 2022 Jackson Hole Economics Symposium, which supports our belief that the Fed will continue to be hawkish even as the economy slips into recession later this year, “Nomura Research said. The statement stated, “We anticipate a recession to begin in Q4 2022, but rising prices will likely lead to prolonged Fed tightness through February before cutbacks in Q3 2023.”

According to analysts, the revised ADP employment data and the August NFP will be closely watched, with potential ramifications for the magnitude of the Fed’s upcoming rate increase in September.

In his speech last week at the Fed’s Jackson Hole conference, Powell noted that restrictive monetary policy might be necessary for a while to combat high inflation and advised against prematurely easing financial conditions.

“With such a strong USD backdrop, USDINR is doing well. FPI and carry world trade in EMs are hampered by a substantial US Dollar Value, high US bond rates with a sharp yield curve, and sluggish equities markets. However, RBI will tightly control the speed of the upward increase. Anindya Banerjee, VP of Currency Swaps & Derivative Contracts at Kotak Securities, stated that the RBI has the dual goals of preventing the Rupee from being a weak outlier and preventing the USDINR from becoming too volatile.

This indicates that they might keep selling USD as spot and future prices reach new all-time highs. According to Banerjee, the pair’s trajectory might not be altered, though, and the upward course would likely continue.

He forecasts that over the next one or two weeks, the Rupee will fluctuate between 79.70 and 80.50. However, traders anticipate the central bank’s action to reduce losses by selling dollars. Investors will keep an eye on the central bank after an insider claimed that the RBI was ready to sell an additional $100 billion in order to protect the Rupee from sharp declines. The strength of the dollar from oil importers is harming the currency. Additionally, the growing trade and current account deficits impacted investor confidence.

The Rupee dropped under the 80 mark, as per Anil Kumar Bhansali, Director of Treasuries at Finrex Treasury Advisers, as oil purchasing continues to hurt the local currency. 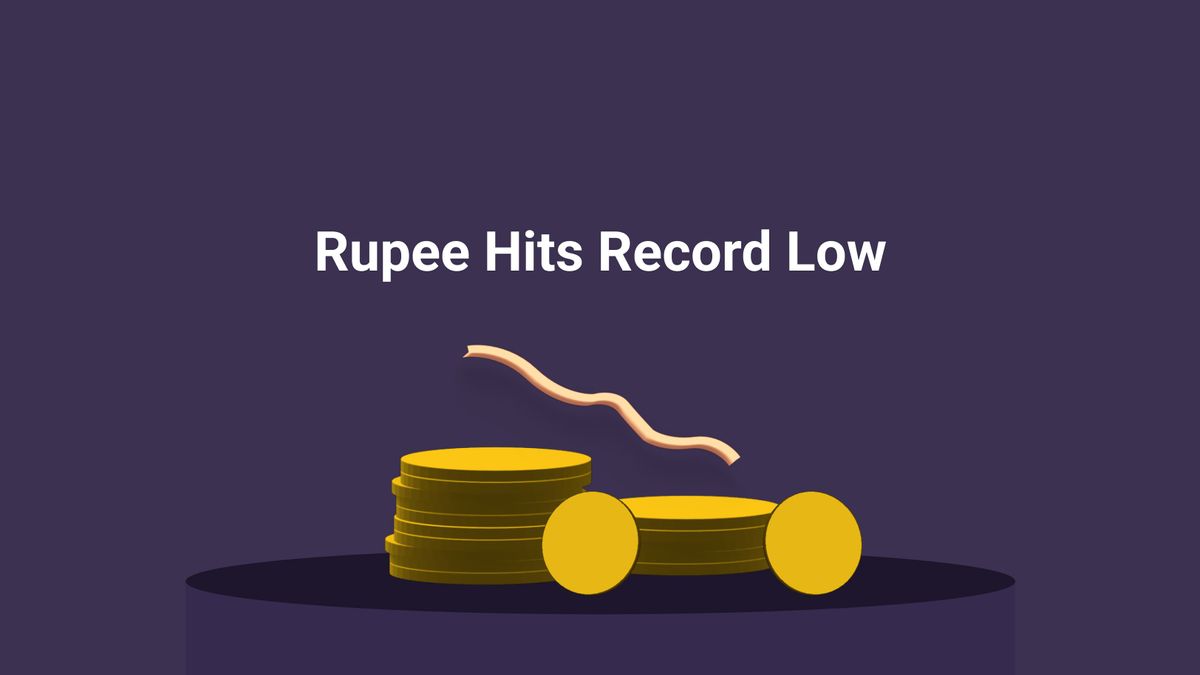 The effect of oil prices on trade

In a nation that imports 80% of its oil, higher crude oil prices have led to a worsening trade balance. As per official figures released last week, the price of imported coal and petroleum increased India’s merchandise trade imbalance in June to a historic $26.18 billion.

In its quarterly economic assessment, the Finance Ministry warned that more expensive imports could increase the budget deficit and lead to additional currency depreciation. After reaching an eight-year peak of 7.79 percent in April, inflation in consumer prices in India, the sixth-largest economy in the world, slightly decreased to 7.01 percent in June.

However, despite consecutive increases in interest rates in May and June, price increases have stayed considerably beyond the central bank’s goal range of two to six percent. To keep the rupee stable, the central bank has also liquidated over $34 billion of its foreign currency reserve.

The Indian Rupee is declining; Why? On Friday, US Fed Chairman Powell reaffirmed the central bank’s unwavering commitment to fighting inflation while emphasizing the risks associated with rising and protracted periods of rapid price growth. Short-end and 10-year rates that are rate-sensitive increased in response, and stocks had a steep decline.

“While slower the GDP will be, higher interest rates and a softer labor market will help to reduce prices, and they will also hurt some people and companies. These are the regrettable consequences of lowering inflation. However, failing to bring back price stability will result in even more suffering, Powell said in his address.

“Powell at Jackson Hole satisfies our expectations. We were generally satisfied with Chair Powell’s remarks at the 2022 Jackson Hole Economics Symposium, which supports our belief that the Fed will continue to be hawkish even as the economy slips into recession later this year, “Nomura Research said. “We anticipate a recession to begin in Q4 2022, but rising inflation will probably cause the Fed to continue increasing through February before cutting rates in Q3 2023, “Nomura included. The Indian Rupee dropped to an all-time trough of 80.06 last month. The US dollar has gained more than 7% against the Indian Rupee thus far.

Anindya Banerjee, VP of Currency Derivatives & Derivative Contracts at Kotak Equities Ltd., said on the forecast for the future: “USDINR is on a soundtrack, with such a strong USD background. It is difficult for FPI and carry world trade in EMs due to the high US bond yields, the vital US Currency Index, the sluggish equity markets, and the sharply inverted yield curve.

However, RBI will tightly control the rate of the upward increase. The RBI wants to avoid the USDINR becoming too volatile and the Rupee becoming a weak outlier. This indicates that they might keep selling USD even when the market and forward rates reach new all-time highs. The pair’s trajectory might not be affected by this, though, and the rising trend would continue to be the route of least resistance. Over the next 1-2 weeks, a range between 79.70 and 80.50 is anticipated.