According to the World Bank’s most recent economic forecast, India’s economic growth rate would drop from an anticipated 6.9 percent in 2022–2023 to 6.6% in the following fiscal year. Of the seven greatest emerging and developing economies (EMDEs), India is predicted to grow its GDP at the quickest rate. Compared to the previous fiscal year’s growth rate of 8.7%, the current fiscal year’s growth rate of 6.9% (April 2022 to March 2023) is lower. The growth rate is anticipated to be 6.1% during 2024–25. According to the report, “export and investment growth will be hampered by the slowdown in the global economy and increased uncertainty.” The government has increased infrastructure spending and put in place a number of business-friendly regulations. However, it will promote private investment and support the expansion of industrial capacity. The paper states that “growth is projected to fall, peaking at 6.6% in FY2023/24 before reverting to its potential rate of little over 6%.”

In the first half of the fiscal year 2022–23, the GDP grew by 9.7% annually, driven by robust growth in fixed investment and private consumption. Since much of last year’s consumer inflation exceeded the Reserve Bank’s maximum tolerance level of 6%, the policy rate was increased by 2.25 percentage points between May and December. With deficits for crude oil and petroleum products (USD 7.6 billion) and other commodities (such as ores and minerals at USD 4.2 billion), India’s goods trade imbalance has more than quadrupled since 2019 and reached USD 24 billion in November.

According to the World Bank, India used its foreign reserves, which stood at USD 550 billion in November, or 16% of GDP, to reduce excessive exchange rate volatility, which in turn helped to restrain the depreciation of the rupee. In addition, the sovereign spread has remained largely stable at 1.4% in December, roughly in line with average levels in the five years before the pandemic. According to the report, “sufficient policy buffers have allowed breathing room to sustain the ongoing recovery and stimulate public investment,” thus financial and fiscal tightness is anticipated to be less apparent than in much of the rest of the area.

India’s GDP is declining, and how it responds to the decline will determine its economic destiny.

Heads nodded in agreement as Reserve Bank of India (RBI) Governor Shaktikanta Das announced the increase of the repo rate (the rate at which the central bank loans to commercial banks) by 35 basis points to 6.25 percent. However, his move to lower the gross domestic product (GDP) growth prediction for FY23 from a September forecast of 7% to 6.8% aroused some questions. The central bank lowered its interest rate from 7.2% to 7.3% from when it had previously set it (in April), and this was due to internal factors rather than external ones like inflation or geopolitical tensions that affect India’s exports.

According to data released six days before the governor’s speech, the GDP growth rate for Q2 of FY23 decreased to 6.3% from 13.5% in Q1 of FY23 and 8.4% in Q2 of FY22. However, because it followed the predicted course, it doesn’t seem to have alarmed anyone. “Interestingly, the growth rates for GVA (gross value added) fell 70 basis points short of those for GDP. Sanjay Kumar, Partner, Tax and Public Policy Leader at Deloitte Touche Tohmatsu India, points out that this may be because tax receipts are greater since GDP is made up of GVA plus net taxes. “Higher tax receipts are positive and suggest a successful current fiscal year. Another indication of a strong recovery is this. Perhaps more concerning is the wave of GDP projection reductions that occurred in the months before the RBI’s most recent monetary policy decision. It all started on September 1 when Soumya Kanti Ghosh, the Group Chief Economic Adviser of State Bank of India (SBI), the largest bank in India, significantly lowered his prediction for India’s GDP growth in FY23 from 7.5% to 6.8%. Many financial organizations reduced their predictions for India’s GDP growth in fiscal FY23, following SBI’s lead (see figure ‘Dipping Growth’). The main causes highlighted were inflation, foreign threats, and a slowdown in the industrial sector.

ICRA was the lone exception, continuing to forecast a 7.2% growth rate for FY23. Why did ICRA stick with its stance? “The MPC (Monetary Policy Committee of the RBI) had decreased its growth prediction for FY23 since the outcome for the first quarter (13.5%) had behind its projection, but it was very near to our expectation,” explains Aditi Nayar, Chief Economist of ICRA (13 percent). Despite the negative effects of slowing global development, we have maintained our FY23 growth prediction of 7.2 on upwardly revised merchandise exports and positive optimism throughout the holiday season.

GDP predictions for the next fiscal year, FY24, are less bullish. IMF and CRISIL predict GDP growth of 6.1% and 6%, respectively, for FY24. Other organisations have the same mentality. Due to transmission delays brought on by monetary policy, we have decreased our prediction for GDP growth in FY24. Further rate increases should, in our opinion, be data-dependent until inflation is inside the tolerance zone, with the balance shifting significantly in favour of avoiding a growth sacrifice, according to ICRA’s Nayar. India’s GDP is expected to increase at a pace of 5.9% in 2023, which is a full 100 basis points slower than the 6.9% growth rate in 2022, according to Goldman Sachs.

However, that is when the gloomy commentary starts to shine. The growth (in FY24) will likely be a tale of two halves, with a weaker first half as the reopening boost fades and monetary tightening impacts domestic demand, according to Goldman Sachs’ India 2023 forecast study. Growth is probably going to rise back up in the second half as the economy rebounds globally, the drag from net exports lessens, and the investment cycle strengthens.

The rupee’s value in relation to the dollar is a crucial factor in net exports. The rupee is expected to perform better in FY24, according to Dharmakirti Joshi, Chief Economist of the rating agency CRISIL. She notes that the currency has stabilized recently as a result of a slight easing in the strength of the US dollar, the return of FPI flows, and the decline in global crude oil prices. He anticipates a steady strengthening of the rupee, with an average value of 79.5 versus the dollar in March 2023 as opposed to 76.2 in March 2022. 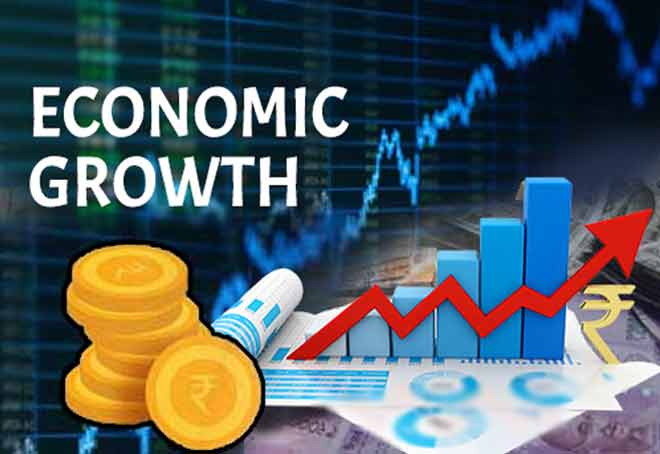 “As our CAD (current account deficit) reduces, the rupee is projected to stay range-bound and not weaken considerably in the upcoming fiscal.” Less pressure from imported inflation would result from this, which would encourage lower home inflation. This would reduce the following fiscal year’s consumer and investment demand headwinds, according to Joshi.

Goldman Sachs had a more pessimistic outlook on the rupee, predicting that it will likely weaken to 84 per dollar in three months and then gradually stabilize around 82 over a year. However, it also predicts that “growth capital may continue to seek India, as global corporations seek to diversify sources of supply and India provides an enticing potential over the long run.”

How can growth be sustained in FY24? Joshi of CRISIL anticipates that the government will continue its Capex program to promote growth. The government is anticipated to keep its focus on infrastructure-led capital spending next fiscal year, he writes, “with consumption demand still in its infancy and broad-based private sector investments experiencing headwinds owing to an uncertain demand environment.” Although there are some promising signs for the upcoming fiscal year, one cannot afford to get complacent. Going forward, forecasts suggest that the GDP growth will probably be about 6.8%. (in FY23). Accordingly, India would have the fifth-largest economy in the world and by far the fastest-expanding economy, according to Kumar of Deloitte. However, it will be crucial to be on the lookout for dangers related to the global downturn and ongoing geopolitical crises that might lead to more significant disruptions in the growth pace.

A New Low For China's Markets As EU Investors Move Away And Experts Say China No Longer A Bright Market!