In 2022, the net absorption rate for office market property in India reached a three-year high.

According to a survey by Jones Lang LaSalle (JLL) India, a real-estate consultant, the net absorption for the Indian office market in the seven largest cities of Mumbai, Delhi-National Capital Region, Bengaluru, Hyderabad, Chennai, Kolkata, and Pune reached a three-year high of 38.25 million square feet in 2022.

“The office market in India has rebounded significantly in 2022, the year ranking second only to 2019 over the previous ten years in terms of office market performance post-COVID. Despite the changing hybrid work landscape, office occupancy levels have significantly increased. Occupiers are now approaching their real estate initiatives with better clarity and agility, which has led to a significant increase in demand “said Rahul Arora, MD, Karnataka & Kerala at JLL India and Head Office Leasing Advisory India. He argues that India’s momentum as a rapidly advancing office market with new job creation, its well-established and expanding credentials as a hub for technology and innovation, businesses’ expansion plans remaining on track, and more businesses looking to India from a talent perspective are all significant growth drivers for the office market. These factors all contributed to the office market’s strong performance for 2022.

The net absorption figures for 2022 have been strengthened by a solid year with record-high completions and pre-commitments being honored by the majority of occupiers as a return to work has gathered momentum across all industries.

Net absorption is down 19.0% on a sequential basis at 7.99 million square feet due to early indications of weakness brought on by global headwinds, which resulted in delayed decision-making and a cautious approach from occupiers, which had an adverse effect on deal closures in the fourth quarter of the year. The new floor space occupied less than the floor space vacated is how net absorption is measured.
Delhi-NCR took the top spot in net absorption during the fourth quarter with a share of 23.7%, while Hyderabad and Chennai showed strong year-end momentum to outperform even Mumbai and Bengaluru.

The top three cities accounted for 60.9% of the quarter’s net absorption, driven by robust supply addition supported by prior pre-commitments. With the largest net absorption for the calendar year 2022, Bengaluru kept the top spot, closely followed by Hyderabad in second place. All cities’ full-year net absorption exceeded the figures from 2021. As a result, net absorption over all of India increased by a significant 46.1% from the previous year. 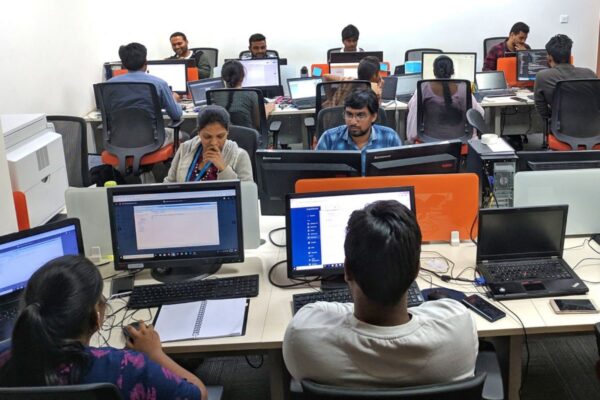 Approximately 53–58 million sq ft, with an average pre-commitment of 14–17%, are on the books for the upcoming 12 months. Pre-commitment rates for assets owned by institutional landlords, which make up 30% of the supply pipeline, are 22-25%, indicating a flight to quality with the importance of healthy workspaces and ESG factors being heavily weighted during space planning “said Samantak Das, Chief Economist and Head of Research and REIS for JLL India.

He claims that due to multiple real estate initiatives being placed on hold or postponed indefinitely due to the increasing macroeconomic headwinds, space requirements have shown a minor softening, with active requirements dropping by roughly 15%.

Businesses will probably postpone making decisions in the market as they wait for macroeconomic signs before investing money in new offices. Office demand is predicted to be similar to 2022 with a marginal to modest upside, driven by sectors like flex, healthcare-life sciences, GCCs, and manufacturing/industrial. It is also projected to benefit from its leadership position in the global IT ecosystem.

A Covid-free year and more certainty in the business environment bolstered on-ground real estate activity, with occupiers approaching their portfolio strategy with much more precision. Gross lease activity for the year 2022 increased to 49.41 million sq ft, reaching a three-year high.

In fact, gross lease activity for 2022 was 84 percent of the highs reached in 2019, indicating a strong post-Covid recovery in market activity throughout the year. Mumbai, Bengaluru, and Delhi NCR were responsible for 23.5%, 19.6%, and 18.8% of the gross leasing activity in the fourth quarter of 2022, respectively.

If we look at gross lease activity for the entire year of 2022, the three largest office marketplaces are Mumbai, Delhi NCR, and Bengaluru in that order. Over two-thirds of occupier activity for the calendar year, 2022 is accounted for by these three markets. As occupiers delayed making decisions and awaited the release of major trends from their corporate headquarters and international clients on the general direction of their businesses, the early-year market momentum gradually slowed down at the end of the year, sinking on the slope of the global headwinds.

Tech’s decreased market share made clear how slightly sluggish its transaction activity had become. Flex continued to enjoy its winning streak and recorded an 18.8% share of gross leasing activity, while technology maintained the top rank but saw its share decline for the third consecutive quarter to 25.3%.

With its share of gross leasing at 14.0%, the banking, financial services, and insurance (BFSI) industry saw strong momentum supported by particularly significant transactions that took place in Mumbai during the quarter. The technology industry took the year’s largest market share at 27.6 percent, followed by the flexible office players at 18.5 percent and manufacturing & industrial at 13.9 percent.

At 58.27 million square feet throughout the year, new completions set a new record for the Indian office markets. Hyderabad and Bengaluru led the completions during the fourth quarter, accounting for a combined 60.5% of the quarterly supply additions.

The research indicates that the pan-India vacancy rate has increased to 16.6 percent, up 60 basis points on a quarterly basis, with higher supply infusion than expansion-driven occupier activity. Additionally, going forward, it is predicted that vacancies will be stable between 16 and 17 percent.

Despite a modest lull in leasing momentum, the substantial future supply pipeline and moderate to high pre-commitments in the next projects will maintain net absorption and keep vacancies within acceptable limits in 2023.

Covid cases: Why govt said next 40 days are crucial for India?

Rapidly warming Arctic linked to extreme cold weather in the US: What a new study says and how is it effecting the economy?