Stanford University scientists have created a robot that can dive deep into shipwrecks and sunken planes. Its operators can experience the same feeling as underwater adventurers as OceanOneK.

A 3D camera in OceanOneK captures the underwater world in full color, and its arms and hands reach those of a diver.

Computers and eight multidirectional thrusters on the back of the robot allow it to maneuver carefully around sunken ships.

As OceanOneK is controlled via controls at the ocean surface, humans can feel water resistance along with artifact contours due to its haptic (touch-based) feedback system.

In OceanOneK, users have the chance to view and touch the underwater world realistically without the dangers and immense pressures experienced by a human diver underwater.

The robot was sent underwater in September by Stanford roboticist Oussama Khatib and his students. A new underwater expedition was just completed by the team in July.

In addition to the sunken World War II P-38 Lightning aircraft, OceanOneK has explored the wreckage of the Italian steamship Le Francesco Crispi, the Roman ship off Corsica, and a sunken submarine named Le Protée. The Weichai Professor at Stanford’s School of Engineering and director of the Stanford Robotics Lab, Khatib, said: “You move very close to this amazing structure, and you feel it when you touch it.”

Robots might soon be exploring oceans in an entirely new way with OceanOneK, allowing us to see them in a whole new light.

One of the robot’s disabled arms had to be replaced by Guo and another Stanford doctoral student during a storm on their boat deck. OceanOneK couldn’t ascend during a thruster check during its deep dive in February. The power and communications line collapsed, entangling the robot in a tangle.

OceanOneK’s descent was successful after they pulled in the slack. In its first touch of the deep seabed, the robot left a commemorative marker that read, “A vast new world for humans to explore.”

The experience was described by Khatib as an “incredible journey.” This is the first time a robot has explored this level of depth, interacted with an environment, and allowed a human to feel it.

Roman ship and Crispi were revisited in July. Its cargo remains scattered on the seafloor despite the former being all but lost, Khatib said. OceanOneK managed to collect ancient vases and oil lamps still bearing the names of their manufacturers from the site of the Roman ship.

Video of corals and rust formations while bacteria feast on the ship’s iron was captured by the Boom Camera Robot inside the Crispi’s fractured hull.

The expedition to France took us to France, where we discovered that the piece of this robot we had been working on at Stanford was part of something far greater,” Piedra said.

During the dive, you get a sense of how exciting and important this is for science as a whole.” 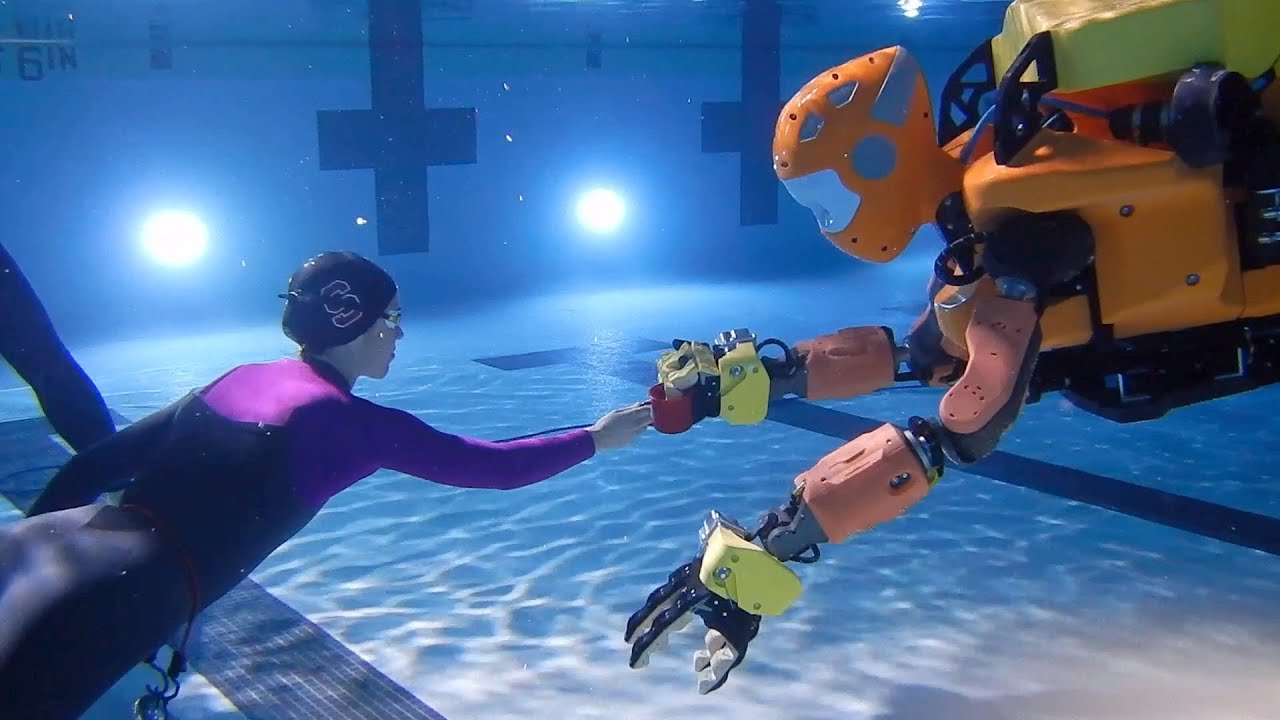 As with OceanOneK, Khatib noted that the challenge was designing a robot that could endure the pressures under various depths and an underwater environment.

In 2016, OceanOne explored Louis XIV’s wrecked flagship La Lune, which is 20 miles (32 kilometers) off the coast of southern France and lies 328 feet (100 meters) below the surface of the Mediterranean. Humans did not touch the 1664 shipwreck.

Khatib’s hands felt sensations when OceanOne touched the vase before placing it in a recovery basket after the robot recovered a vase about the size of a grapefruit.

It was the desire to study coral reefs at depths beyond what divers are typically able to achieve that gave rise to OceanOne. By integrating artificial intelligence, advanced robotics, and haptic feedback, the Stanford team aimed to create a virtual diver that is as close as possible to a human.

An object as fragile as coral or sea-weathered artifacts must be handled carefully by the robot, which has a brain that can register when it must handle it with care. The bot is controlled by an operator, but it is equipped with sensors and algorithms so it can avoid collisions and operate autonomously.

To increase buoyancy and cope with 1,000 meters of pressure — 100 times what humans experience at sea level — the team changed the robot’s body to use special foam that contains glass microspheres.

To prevent compression as the robot descends to the ocean depths, the researchers upgraded the arms with oil and springs. A new type of hand was added to OceanOneK, as well as the movement of the hands and the head was increased.

According to Stanford’s School of Engineering doctoral student Wesley Guo, the project presents challenges that he hasn’t seen in any other system. To make those solutions work, you have to think outside the box.”

A video camera was carried on a boom by the robot, and objects were collected and tested in Stanford’s recreation pool. It was then time for OceanOneK to face its ultimate challenge. With expeditions planned to lost underwater cities, coral reefs, and deep wrecks, the project that was born in 2014 has a long future. As a result of OceanOneK’s innovations, it will be easier to repair boats, piers, and pipelines underwater.

On the border between Peru and Bolivia, a sunken steamboat will be explored as part of an upcoming mission.

Nevertheless, Khatib aspires to reach a much higher level of ambition with this project.

A computer robot has attracted the attention of the European Space Agency, Khatib said. The robot could be controlled by astronauts using a haptic device on board the International Space Station.

This would simulate doing the task on a different planet or moon because people could interact with the robot deep in the water, Khatib explained.

As the 5G spectrum auction concludes, who bought what bands and why?