On Wednesday, Indian Prime Minister Narendra Modi officially opened the 2,600-bed Amrita Hospital in Faridabad, Haryana, which bills itself as the largest private hospital in India. The super-speciality hospital has the newest medical technology. The Homi Bhabha Cancer Hospital & Study Center at Mullanpur in New Chandigarh will then be opened by PM Modi in Mohali. The considerable immunization effort in history was made possible by a successful spiritual-private partnership, he continued, citing COVID-19 to be an excellent example.

The Prime Minister added that India is working to ensure that governments and other parties come forward to reshape the health and education industries on a mission mode. “A mixture of technology and modernization will result in the country ’s development in the healthcare industry,” the Prime Minister said. 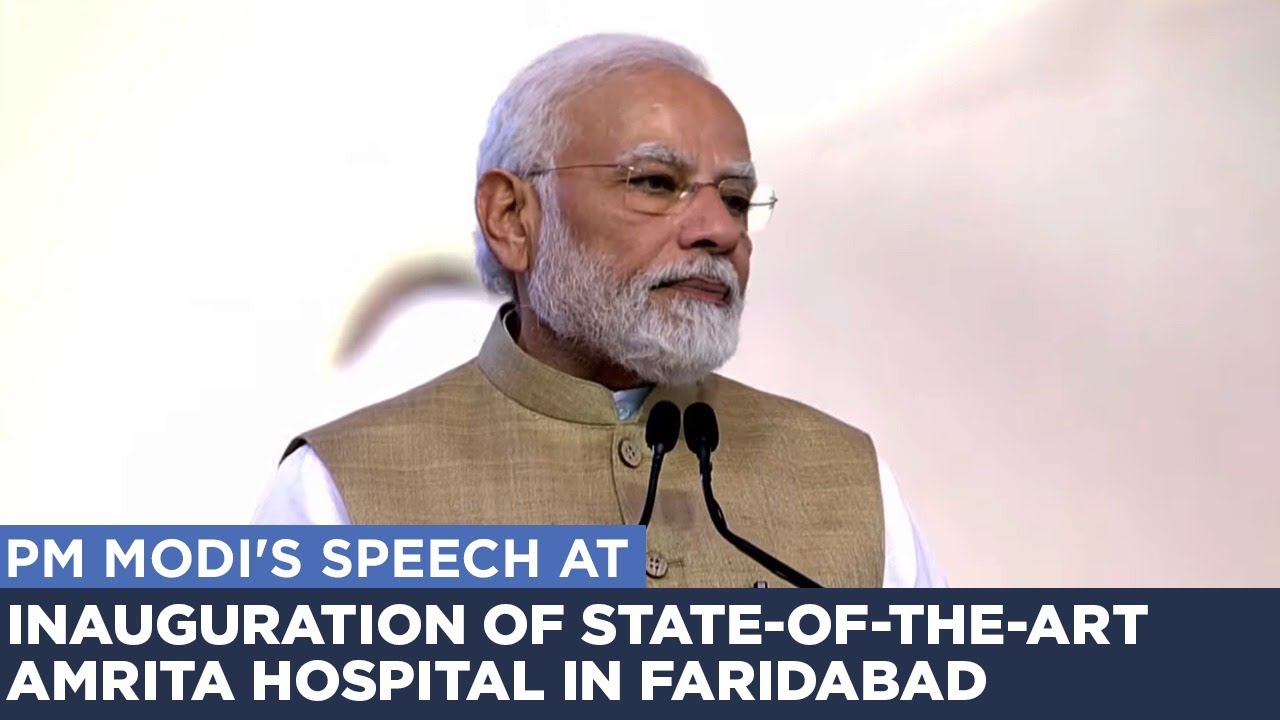 With the help of Mata Amritanandmayi Math, the cutting-edge Amrita Hospital was created on a big 130-acre site with sustainability in mind. It contained a dedicated seven-story research building and was erected over six years.

“With the establishment and foundation of this hospital, the state’s residents would receive top-notch medical facilities,” stated Khattar. Khattar remarked, alluding to the day the Amrita hospital’s cornerstone was laid in 2016, “This sapling established by Amma during the year 2016 has already taken the appearance of a big tree.” Today is not just a clinic opening; it is a “Yagya” for the benefit of the underprivileged and those in need. This hospital will undoubtedly be crucial in achieving the “Swasth Bharat” purpose or motive of the prime minister.

According to Khattar, PM Modi has a special bond with Haryana, and because a result of this affection, the complete state views his attendance at this inauguration ceremony to be a gift for them. “The country is steadily making progress on the world map under the prime minister’s strong leadership.

It is truly admirable that the prime minister is creating welfare programs based on ‘Ayodhya’ principles while taking care of all the poor and needy, he remarked. The Pradhan Mantri Jan Arogya Ayushman Bharat Yatra, the Ujjwala plan, which ensures residential gas linkages and connections, and the Har Ghar Nal Se Jal Yojana, which provides clean drinking water are the social programs that are governed by ‘Ayodhya’ principles. These innovative welfare programs only reinforce the confidence and spirit of every fellow citizen because they genuinely think their prime minister is sitting with them in every situation.

Modi gave the Haryana government credit for its excellent work with the Jal Jeevan and Beti Bachao Beti Padhao programs.

Today, Haryana is one of the top states in the country where every home is linked to water supplies. Similar to how the Haryana people helped the Beti Bachao Beti Padhao program succeed, Modi added.

“Fitness and sports are an integral part of Haryana,” Prime Minister Modi stated, highlighting the accomplishments of the state’s athletes. The athletes bring honour to the country by competing brilliantly in international sporting competitions. Other states thought to follow Haryana’s lead and make the same strides.

The Prime Minister declared: “Violent propaganda was released by some people when India created a Covid vaccine, and many rumors began spreading in the population. At that point, social and religious leaders united and requested the populace not to pay attention to these. The impact was immediate, and there was no vaccine hesitation in this country as compared to other countries.

I had projected a picture of the five pledges of Amrit Kaal in front of the country from the Red Fort’s ramparts. One of them was the total repudiation of the slave mentality. When we let go of this attitude, our actions start moving in a different direction.

This is now apparent in the country’s healthcare system because traditional knowledge is receiving more respect. Today, yoga and Ayurveda are widely accepted, and the world will commemorate the International Millet Year next year.

The Hon. Chief Minister of Haryana, Shri Manohar Lal, said: “I am grateful beyond words to Amma for selecting Faridabad to create the very first Amrita Hospital in North India and congratulate her on behalf of all the people of the state. In 2016, I was present for the hospital’s ceremonial laying of the cornerstone.

The seed planted back then has since blossomed into one of the nation’s most prominent hospitals and grown into a massive tree. According to the prime minister, every area in the country should have at least one medical college. In this, Haryana is making remarkable strides. There were 700 MBBS seats available at the state’s seven medical institutions in 2014. It has raised the number of colleges by six, bringing the total to 1,650. In addition to the medical college at Amrita Hospital, we will now create eight more in the state, bringing the total number of seats to 2,800. With this, Prime Minister Modi’s purpose of having a medical college in every district of Haryana will be realized. The Honorable Prime Minister leads India.

If the country ever has to confront something like a tremendous health crisis again, Amrita Hospital will be of great help. Amma has genuinely blessed us with amazing health through her outstanding medical facility.

1) It is a 2,600-bed private clinic with state-of-the-art technology, including a centralized, fully automated lab, which will significantly improve the region’s healthcare infrastructure (NCR). The brand-new and the excellent super-speciality hospital has 500 beds at the start, and it will be utterly operational over the course of the following five years. According to earlier statements by hospital officials, when it is fully functional, the hospital with 81 specialities will be the most prominent private hospital in Delhi-NCR and the entire country.

2) The cutting-edge Amrita Hospital was developed over the course of six years on a 130-acre campus with minimal environmental impact. It contained a dedicated seven-story research block and was sponsored by the Mata Amritanandmayi Math. The hospital complex would have a built-up area of 36 lakh square feet, with a 14-floor building containing basic medical services. On the rooftop, there is a helipad.

3) It has a brand-new super-speciality hospital that began operations with 500 beds and is scheduled to reach total capacity over the course of the following five years.

4) The hospital, which has 81 specializations, is expected to be the most prominent private hospital in Delhi and the entire nation once it operates, according to past statements by its authorities.

5) The hospital complex would have a built-up size of 36 lakh square feet, with a 14-floor building holding the primary medical services. On the rooftop, there is a helipad.

6) A medical college will be located on the site of the new mega-hospital, which has a built-up size of one crore square feet, in Sector 88 in Faridabad.

9) The cancer hospital, a 300-bed tertiary care facility, is outfitted with contemporary amenities to treat all cancer kinds using every available method of treatment, including surgery, radiotherapy, and medical oncology (chemotherapy, immunotherapy, and bone marrow transplant), among others.

10). The hospital will serve to be the “hub,” and the 100-bed facilities in Sangrur will help because it “spoke” for cancer treatment and care in the area. The hospital will soon turn into a teaching facility, making it the eighth school grounds of Amrita Vishwa Vidyapeetham, that this year received the NIRF ranking of fifth-best university in India (NAAC certified of A++), with its Medical College located at Amrita Hospital in Kochi, Kerala, receiving the eighth-best ranking in India.

A medical college will be located on the campus of the new mega-hospital, which is located in Sector 88 in Faridabad, close to the Delhi-Mathura road. It has a built-up space of one crore square feet. On the grounds are a specialized seven-story research building and eight institutes, including those for mother and child care, renal sciences, bone disorders, trauma, transplantation, and gastro-sciences. The spiritual tradition of India is carried through her. The biggest private hospital in India, Amrita Hospital, perfectly illustrates how modernity and spirituality can coexist, according to PM Modi. He added that the facility would give poor patients from the area and the country access to affordable medical care.

In India, “treatment is a service, health is a charity,” PM Modi continued. The country has surmounted many obstacles thanks to the intimate connection between spirituality and healthcare, including the most current one of COVID-19.

Before Faridabad, Mata Amritanandmayi Math had constructed the Amrita Hospital in Kochi, Kerala, which has frequently been known to be one of South Asia’s top hospitals. As part of its philanthropic medical care approach, the Kochi hospital features 12 super speciality sections and 45 additional departments serving 43.3 lakh patients for free.

The facility, which is being built at a projected price of over Rs. 6000 crores, would provide people in Faridabad and the more comprehensive NCR area with access to cutting-edge medical amenities. Several people were in attendance, including Chief Minister Manohar Lal Khattar and Deputy Chief Minister Dushyant Chautala. Prime Minister Narendra Modi is in Punjab and Haryana on a one-day trip. The Prime Minister began the nation’s two effective health programs on this day.

After the opening in Faridabad, PM Modi will drive to Mohali and, at around 02:15 PM, dedicate the nation’s “Homi Bhabha Cancer Hospital and Research Center” in Mullanpur, New Chandigarh, Sahibzada Ajit Singh Nagar Area (Mohali).

The Prime Minister will dedicate the Homi Bhabha Cancer Hospital & Research Center to the Country at Mullanpur, Chandigarh, Sahibzada Ajit Singh Nagar Municipality in an effort to serve citizens of Punjab and neighbouring states and UTs with top-notch cancer care (Mohali).

The Tata Memorial Centre, an affiliated organization, operated by the Department of Atomic Power of the Government of India, spent more than Rs. 660 crores to construct the hospital.

The population of the entire Delhi-NCR region, and that of the neighboring states of UP, MP, Punjab, and Rajasthan, and all of the other countries in North and North-East India, would be served by the Amrita Hospital, Faridabad, in addition to the residents of Faridabad and the State of Haryana.

Because it is run entirely to be a non-profit organization, it is anticipated to majorly lower healthcare expenses throughout the entire region. The Faridabad hospital has provided accessible or affordable treatment in emergencies to patients in financial need, replicating the concept of Amrita Hospital in Kochi.