Why Sri Lanka’s economy collapsed, and what’s next for the island nation?

President Gotabaya Rajapaksa and Prime Minister Ranil Wickremesinghe both resigned on Saturday in response to rising pressure from demonstrators who stormed both of their homes and burned one on fire.

Sri Lanka’s new Prime Minister, Ranil Wickremesinghe, stated late last month that the debt-ridden country’s economy had “collapsed” and was “going for rock bottom.” Due to a lack of resources to pay for such imports as well as a continuous debt default, Sri Lanka has sought assistance from its neighbours, China and India, as well as the International Monetary Fund.

Both Prime Minister Wickremesinghe and President Gotabaya Rajapaksa decided to retire on Saturday in response to growing pressure from demonstrators who stormed into both of their residences and set one of them on fire. 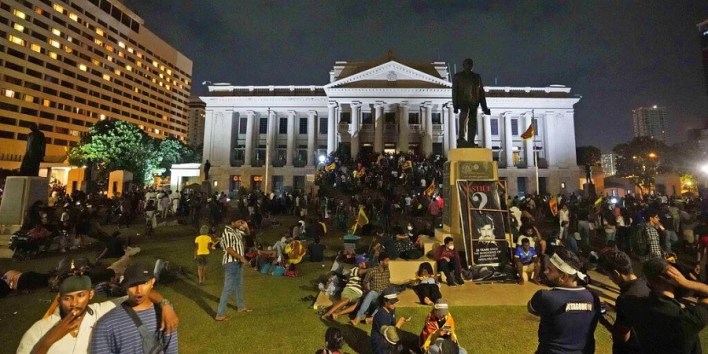 Sri Lankans are foregoing meals and standing in long lines to attempt to buy expensive petrol because of shortages. It’s a depressing fact for a country whose economy had been growing quickly and which had a growing and comfortable middle class before the most recent crisis became worse.

How critical is this situation?

With a $51 billion debt, the government is unable to even cover the interest on its loans. The pandemic and the anxieties about safety that have arisen in the wake of the terrorist attacks in 2019 have hampered tourism, a crucial engine of economic growth. In addition, the country’s currency has lost 80% of its value, increasing the cost of imports and accelerating the already uncontrollable inflation, with food prices rising by 57%, according to government statistics.

As a result, the country is on the verge of bankruptcy and is unable to import basic needs like milk, fuel, and toilet paper. Political corruption is another problem that not only contributes to Sri Lanka’s poor resource management but also makes any attempts at financial recovery more challenging.

Anit Mukherjee, a policy expert and an economist at the Center for Global Development in Washington, believes that any assistance from the IMF or the World Bank should be subject to strict restrictions. This is done to stop the money from being mismanaged.

Mukherjee stressed that because Sri Lanka is located on one of the busiest shipping routes in the world, it is not an option to allow a country of such strategic importance to fall apart.

How does it impact actual people?

Tropical In Sri Lanka, there is normally enough food for everyone, yet some people are still going without. The UN World Food Program claims that while 3 million people get urgent humanitarian aid, nearly nine out of ten households stretch their food by missing meals or making other sacrifices.

Medical professionals have turned to social media to get the necessary equipment and pharmaceuticals. Many Sri Lankans are requesting passports so they may work overseas. Government workers will get an extra day off each week for three months, so they may grow their food. In other words, people are suffering and fervently desire a better situation.

What is causing the economy’s poor situation?

Economists contend that internal problems, such as long periods of subpar management and corruption, are to blame for the disaster. People have been quite critical of President Rajapaksa and his brother, former Prime Minister Mahinda Rajapaksa. The latter quit in May following weeks of anti-government protests that finally turned violent.

The circumstances have become worse in recent years. In 2019, suicide assaults at hotels and churches claimed the lives of around 260 people in 2019. Tourism, a vital source of foreign revenue, was destroyed by that. 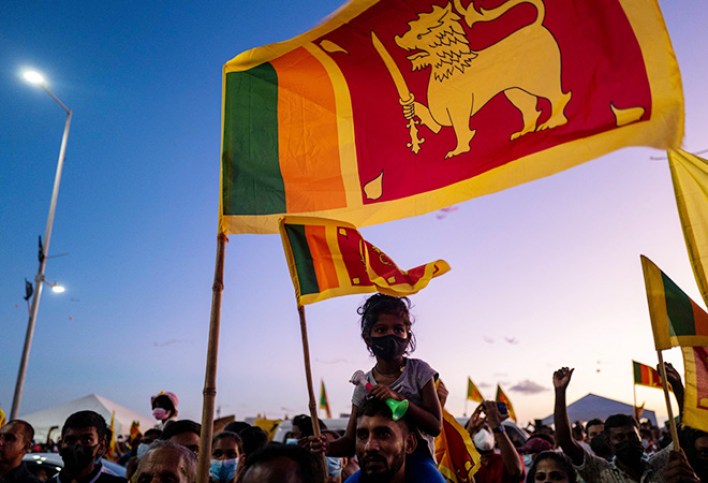 The government needed to raise its revenue as the foreign debt for important infrastructure projects mounted, but Rajapaksa instead pushed through the largest tax cuts in Sri Lankan history. The most recent tax cuts were only reversed after creditors downgraded Sri Lanka’s ratings, prohibiting it from borrowing more money as its foreign reserves decreased. The outbreak was followed by a drop in tourists.

In April 2021, Rajapaksa unexpectedly made the import of chemical fertilizers illegal. The campaign for organic farming caught farmers off guard, destroying their main rice crops and driving up costs. To protect foreign cash, it was also forbidden to import additional items that were considered to be luxuries. Meanwhile, the situation in Ukraine is responsible for increasing food and gasoline costs. In May, food prices soared by almost 60% while inflation was close to 40%.

Why did the prime minister claim that the economy had crashed?

During his sixth tenure as prime minister, Wickremesinghe made a direct comment in June that threatened to erode any faith in the state of the economy but didn’t reflect any new information.

The prime minister seems to have concentrated on the issues facing his administration as it responds to criticism of the lack of progress since he took office weeks ago and seeks the IMF’s assistance. The remark could have been made to buy more time and support while he works to revive the economy.

Sri Lanka has around $25 million in foreign reserves, according to the Finance Ministry. As a result, it is unable to pay off its vast debt or purchase imports.

The Sri Lankan rupee’s value has dropped to roughly 360 to the US dollar in the interim. As a result, the cost of imports increases even more. Sri Lanka has postponed approximately $7 billion in payments due this year. 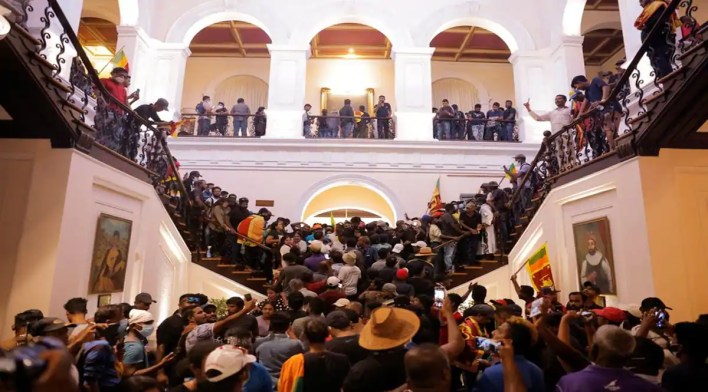 How is the situation being addressed by the government?

Sri Lanka has so far managed to get by, thanks primarily to $4 billion in credit lines from India. A group from India visited Sri Lanka’s capital, Colombo, in June to discuss additional aid, but Wickremesinghe urged people not to count on India to sustain Sri Lanka for very long.

The Colombo Times ran a headline in June that said, “Sri Lanka casts final hopes on the IMF.” A rescue package is being negotiated between the government and the IMF, and Wickremesinghe has stated that he anticipates having a preliminary deal later this summer.

Sri Lanka has also requested more aid from China. Several other countries, notably those of the United States, Japan, and Australia, have given hundreds of millions of dollars.

Earlier in June, the UN issued a global plea for assistance. The $6 billion required for the country’s survival over the next six months is presently barely touched by anticipated funding. Wickremesinghe recently told The Associated Press that he would consider acquiring additional deeply discounted oil from Russia to help address the country’s fuel shortage.

India treads cautiously and says it stands with the people of Sri Lanka.

The Indian government declared on Sunday that it supports the people of the island country in their efforts to pursue prosperity and growth via democratic practices and ideals, existing institutions, and the legal framework. While instability reigns in that country, India has made an effort to keep a safe distance from the Sri Lankan political establishment.

Jaishankar, India’s foreign minister, said that his country has always been a steadfast supporter of Sri Lanka and that it is “trying to help” the neighboring country through its present economic challenges. We will have to wait and watch what they do while they work to resolve their problems at the moment. It is a problem that has been getting worse for some time and is extremely significant.

They must deal with their financial issues on their own. They still need to deal with their position, even if we have been their biggest supporters. They may have already begun discussing it, in my opinion. They need to rearrange their policies to minimize debt and resolve the issues with lenders, he said.

Despite providing $3.8 billion in assistance to its neighbor across the Indian Ocean amid the present financial crisis, India has made an effort to avoid being perceived as backing any one political party or organization in particular. India has categorically denied providing shelter to former Prime Minister Mahinda Rajapaksa and has reaffirmed its commitment to acting in the best interests of the Sri Lankan people as represented by democratic procedures.

The ministry of external affairs cited India as Sri Lanka’s closest neighbour and the source of India’s financial support. It also mentioned how closely the two countries’ cultures are entwined and how India is keenly following recent developments in Sri Lanka. In compliance with a credit line provided to that country, India sent more than 44,000 metric tonnes of urea to Sri Lanka on Sunday.

The government released a statement that said, “We have stood with the Sri Lankan people as they have striven to overcome this tough moment.” “We are aware of the tremendous challenges that Sri Lanka and its people have been suffering.

“India has provided unprecedented support of approximately US $3.8 billion this year alone,” according to the statement. “This advances the important position Sri Lanka holds in our Neighborhood First approach.”

edited and proofread by the nikita sharma

A List Of The Best Chromebook Deal For July 2022

A new coronavirus mutant raises concerns in India and beyond.