Boris Johnson’s UK prime minister is on a two-day visit to India that drew to a close Friday with a slew of deliverables, including an in-person meeting with Prime Minister Narendra Modi for the first time.

At their meeting Friday, Modi and Johnson decided to expand India-UK defense collaboration, including joint production and co-development of fighter jets and next-generation jet engine technology, to give a boost to the two countries’ Comprehensive Strategic Partnership, which was announced at their last virtual summit in May 2021.

While tariff issues continue to be a challenge, the two sides have urged their respective officials to finalize discussions for a free trade agreement (FTA) before Diwali.

The Free Trade Agreement is being worked on by teams from both countries. The negotiators are making good progress. And we’ve resolved to put forth our best efforts to bring the FTA to a close before the end of the year.

“We have also agreed to strengthen collaboration in the defense industry,” Modi added. We appreciate the UK’s assistance to “Atmanirbhar Bharat” in all areas of defense manufacturing, technology, design and development.

At a press conference before leaving for the UK, Johnson said, “Our new and expanded defense and security alliance will help India to boost its own domestic defense sector while also preserving key shared interests in the Indo-Pacific.”

On the other hand, Johnson has stated unequivocally that the UK will “ensure” that critical defense technology sent to India does not end up in Russia.

According to the British Prime Minister, India and the United Kingdom should always be “sticking together and facing our common fears about despotic coercion around the world and acting together to make our countries safer and more prosperous.

India is an astonishingly developing Asian power, with one of the world’s fastest-growing economies… India is also our most important partner in the Indo-Pacific, which is becoming the world’s geopolitical center.

He also said that the national security (NSA), defense, and foreign affairs ministries of the two countries will meet on a “rolling schedule” to launch all projects. India and Britain’s joint statement said: “Both Prime Ministers were eagerly awaiting the convening of the Defense Ministerial Dialogue.”

This year, it would be a crucial step toward ensuring that the relevant framework agreements are in place. 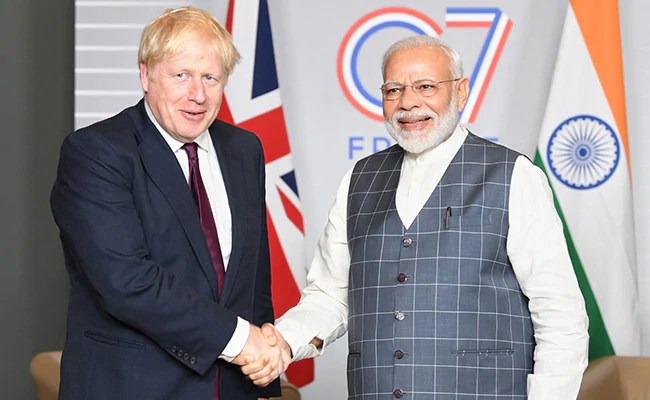 As he expressed his delight at how well he had been treated in India, as PM Modi’s state was decked up with posters welcoming the UK prime minister to India, he said he felt like batsman Sachin Tendulkar and superstar Amitabh Bachchan.

Boris Johnson referred to PM Modi as a “khaas dost” (special friend), saying, “Thank you… my buddy prime minister Modi, Narendra Modi, my khaas dost, I suppose is the expression I want to use… in Hindi.”

We had an amazing two days in India. In fact, I became the first conservative Prime Minister to visit Gujarat, your hometown. It is also the ancestral home to about half of all British Indians. I had a fantastic reception.

I was transported to the world of Sachin Tendulkar. My image was as well-known as Amitabh Bachchan’s. I was visible everywhere. It was incredible. “It was incredible,” Boris Johnson said. Boris Johnson landed in Ahmedabad on Thursday for a two-day visit to India. He spent his first day in Gujarat visiting the Sabarmati Ashram, the Akshardham temple of the Swami Narayan sect in Gandhinagar, and the JCB manufacturing plant.

It was really amazing. I’ve never witnessed such a happy welcome. I would not have received the same reception anyplace else on the planet. It was incredible to witness your (Prime Minister Modi’s) home state for the first time. ” Boris Johnson stated this. U.K. likely to offer a series of technological collaborations.

In the midst of swift global instability, Prime Minister Narendra Modi and his British counterpart, Boris Johnson, agreed on a new and extended India-UK defense collaboration on Friday, as well as a commitment to complete an ambitious free trade pact by the end of the year.

See also  IPOs in India, 2021: How did the regulatory environment change to enable more accessible IPO listings? Why do tech startups go for IPOs?

Mr. Johnson stated on the second and last day of his India visit that the United Kingdom is developing an Open General Export License (OGEL) for India to “eliminate red tape and reduce delays” for defense procurement.

The British Prime Minister stated that both sides are committed to collaborating to address emerging threats across land, sea, air space, and cyber domains, and that the United Kingdom will collaborate with India on new fighter jet technologies as well as in the marine sector to detect and respond to such theaters.

“A beacon in stormy seas”

The British Prime Minister called the India-UK relationship a “beacon in stormy seas” on Friday, ahead of a bilateral meeting at Hyderabad House.

As we look to the future, our partnership on issues that matter to both of our countries, from climate change to energy security and defense, is critical. Mr. Johnson said in his first remark during a ceremonial welcome at Rashtrapati Bhavan.

“I look forward to discussing these concerns with Prime Minister Modi in New Delhi today and working with him to achieve a more secure and prosperous future for both our peoples.

In addition, the United Kingdom will issue an Open General Export License (OGEL) to facilitate more defense and security collaboration in the coming decade. The OGEL will cut bureaucratic red tape in India’s defense acquisitions and expedite delivery times. This is the Indo-Pacific region’s first British OGEL.

Whiskey tariffs ‘tough’ on India, UK’s FTA proposal While the two presidents agreed to end the negotiations, which began in January 2022, by October of this year, Johnson stated that India’s application of taxes on imported whisky and other liquors remains a barrier.

There are some hefty tariffs on goods coming into the country… Tariffs on whisky are a difficult issue to deal with… It would be fantastic if we could remedy that, but as you know, there are several issues that must be handled.

Alcohol imported into India is subject to a 150% customs duty. Johnson, on the other hand, believes the FTA has the potential to create thousands of jobs on both sides. Modi hailed the involvement of British companies in India, saying: “We also had conversations about the big changes that are taking place in India, our infrastructure modernization programme, and the National Infrastructure Pipeline.”

We encourage UK companies’ increased involvement in India. And we got to see a fantastic illustration of this yesterday in Halol, Gujarat. Johnson dedicated the new Halol factory to the UK-based firm JCB on Thursday. 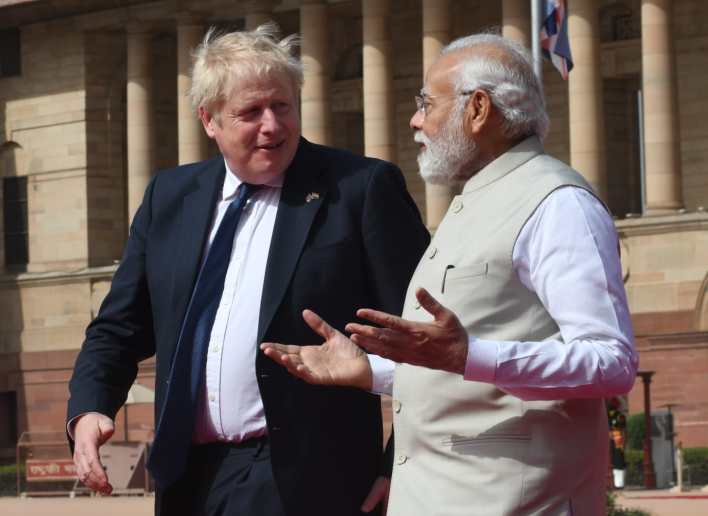 The issue of Khalistan cannot be ‘tolerated.’

When asked what the UK government is doing to address India’s worries about the growing threat posed by Khalistani organizations and other terrorist elements, Johnson stated that the UK has a “very strong perspective” on extremist groups.

In the United Kingdom, we have a very strong opinion. We do not accept extremist organizations forming in the UK with the intention of endangering other nations, particularly India, but as a result of this visit, we have established an anti-extremism task team to see what else we can do to assist India in this regard.

Boris Johnson says, “I took the Indian vaccine; I can’t stop skilled Indians from coming to the UK.”

The visiting British Prime Minister, Boris Johnson, praised skilled Indians and emphasized that he could not prohibit skilled people from coming to the UK. He stated that he got “the Indian jab” as he spoke about the UK-India collaboration in developing vaccines that had inoculated over a billion people against COVID. I had the Indian jab (Covid vaccination) in my arm, and it helped me a lot. “Thank you very much, India,” he remarked.

Regarding India’s failure to condemn Russia for its invasion of Ukraine, Johnson stated that the UK knows that New Delhi and Moscow have long-standing ties.

However, the British Prime Minister praised India for condemning the Bucha massacres and stated that India is aware of what is going on. 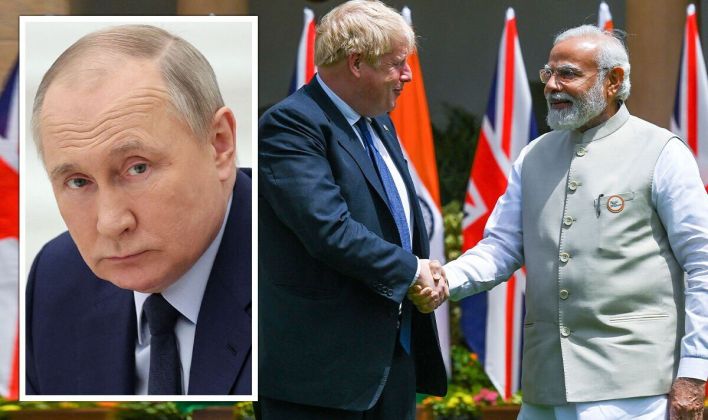 You have to recognize that the Indians have truly come out with strong words as a result of what happened in Bucha. “Indians want peace and they want the Russians out, and I completely agree with that.” “India has a historic relationship with Russia that everyone understands that goes back decades,” Johnson noted.

Not Allowed To Take Exams While Wearing Hijab, 2 Karnataka Students Leave is the latest dramatic twist in the Karnataka Hijab ban tale.