Delimitation also begins in Assam: What is this exercise, and why is it so important? As the EC begins the process of dividing Assam’s electoral districts into constituencies, we look at what delimitation is, how it’s done, and why it hasn’t happened more frequently.

The Indian Election Commission announced on Tuesday that the delineation of Assam’s Assembly and Parliamentary constituencies has begun. The procedure will be based on Census data from 2001. Assam’s constituencies were last redrawn in 1976, based on the 1971 Census.

Delimitation refers to the process of redrawing Lok Sabha and state Assembly seat boundaries to reflect population changes. The primary goal of delimitation is to provide equal representation to equal population segments. In 1971, the population of Assam was 1.46 crore people. In 2001, it had risen to 2.66 crore.

Furthermore, population growth is not uniform across a state’s various regions. As a result, constituency delineation is done on a regular basis to reflect changes in population distribution as well as population growth.

Who is in charge of establishing boundaries?

The Delimitation Commission must function independently of executive authority. The Commission’s decisions must be final and cannot be challenged in court because doing so would result in an election being postponed indefinitely.

How should delimitation be accomplished?

Article 82 requires Parliament to pass a Delimitation Act after each Census. The Union government established the Delimitation Commission once the Act takes effect. The Commission is tasked with determining how many and where to place constituencies so that each seat has the same population to the greatest extent possible. Furthermore, the Commission must decide which seats are reserved for Scheduled Castes and Scheduled Tribes.

The Delimitation Commission makes its draught recommendations available for public comment. Furthermore, the Commission holds open meetings. Following public feedback, it considers concerns and recommendations and makes any necessary changes to the draught proposal. The final order is published in both the Indian and relevant State Gazettes and takes effect on the date specified by the President.

How did previous delineation exercises fare?

The 2002 Act, on the other hand, made no changes to the total number of Lok Sabha seats or their distribution among the states. A few states were also barred from participating in the exercise due to “security risks,” including Assam, Arunachal Pradesh, Nagaland, and Manipur. On March 6, 2020, the federal government reconvened the Delimitation Commission for these four states and the union territory of Jammu and Kashmir.

Why haven’t delimitation efforts been undertaken after each census?

The Constitution requires that, to the greatest extent possible, the ratio of Lok Sabha seats to population in each state be the same across all states. This clause, on the other hand, allowed states with little interest in population control to gain more seats in Parliament.

The southern states, which had not only succeeded in population control but had also developed economically to the point where they produced significantly more per capita revenue than the northern states, were especially concerned about losing meaningful political representation. States would lose political rights if they were divided based on population, but the federal government would benefit from their economic contributions to the main country.

To allay these fears, the main Constitution was amended during Indira Gandhi’s Emergency rule in 1976 to suspend delimitation until 2001. This was postponed until a subsequent amendment in 2026. It was hoped that by this point, the country’s population growth rate would be consistent.

How has the new delimitation procedure been received in Assam?

While the majority of people praised the delimitation process and said it was long overdue, some were concerned that the 2001 census was used rather than the 2011 one. The census for 2021 has not yet taken place.

The poll panel also noted that the last delimitation of Assam’s constituencies was done in 1976 by the then-Delimitation Commission in accordance with the provisions of the Delimitation Act of 1972, using data from the 1971 census.

According to Articles 330 and 332 of the Indian Constitution, seats will be reserved for members of Scheduled Castes and Scheduled Tribes, the election panel announced in a statement.

The Commission will develop and then finalise its own standards and procedures for defining constituencies. According to the statement, the Commission will consider physical characteristics, current administrative unit boundaries, communication facilities, and public convenience when determining the boundaries. The constituencies will also be kept as geographically compact as possible.

After the Commission has finalised a draught proposal for constituency delineation, it will be published in the central and state gazettes to solicit public comments and objections.

“In this regard, a current notice will also be published in two local vernacular newspapers of the state specifying the date and location for public sittings to be also held in the state,” the polling panel added.

The central government revoked earlier notifications that had delayed delimitation in Assam, Nagaland, Manipur, and Arunachal Pradesh due to security concerns on February 28, 2020. The government stated that the exercise could now take place because the previous conditions were no longer met. 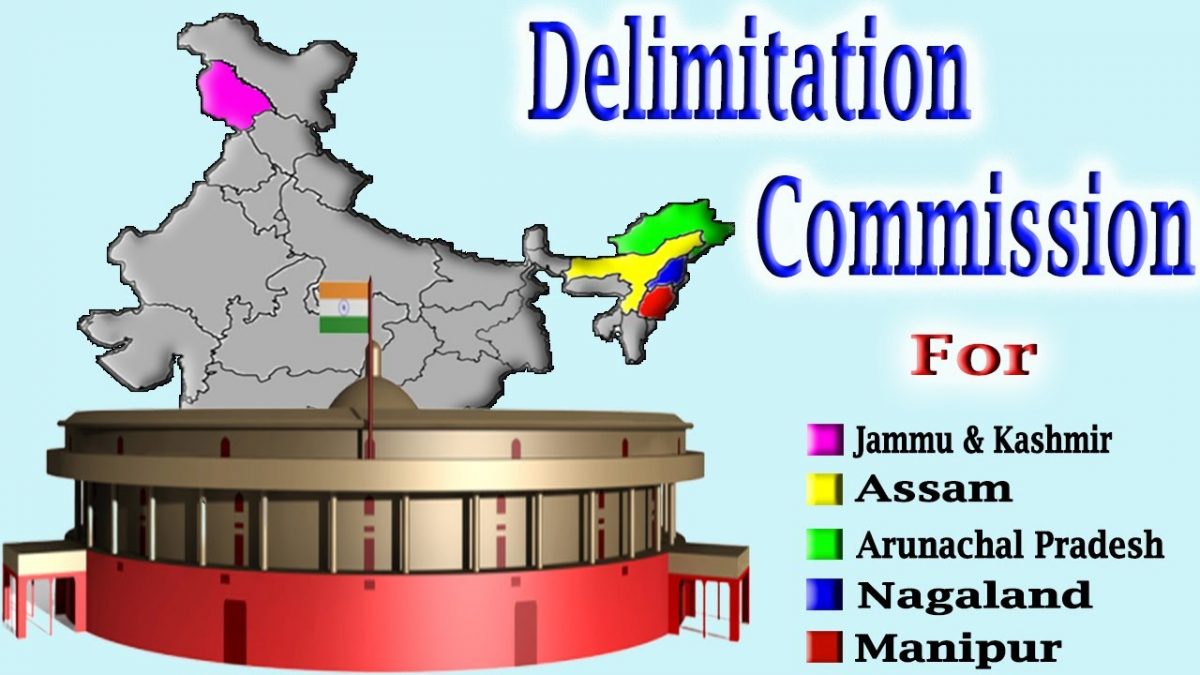 Later in March 2020, a commission led by former Supreme Court justice Ranjana Prakash Desai was formed to redraft the Lok Sabha and also assembly districts for the main Union Territory of Jammu and Kashmir and the northeastern states of Assam, Arunachal Pradesh, Manipur, and Nagaland.

When the delimitation panel was also given a one-year extension on March 3, 2021, a Law Ministry notification stated that the panel would now only consider the delimitation of the Union territory of Jammu and Kashmir.

“In exercise of the powers granted by Section 3 of the Delimitation Act, 2002… the Central Government hereby makes the following amendments in the notification… dated the 06th March 2020, namely – In the said notification, I in the opening paragraph, (a) the words, and the States of Assam, Arunachal Pradesh, Manipur, and Nagaland, shall be omitted,” according to the notification.

According to sources at the time, the four northeastern states were excluded from the delimitation exercise for a variety of reasons, including court cases.

Later, in a letter which was dated November 15, 2022, the Law Ministry requested that the EC delineate Assam’s parliamentary and assembly constituencies.

Coping with it would be difficult as pandemic-induced growth of IT in India slows.