With Andrew Tate’s arrest, we examine the’manosphere’ in which he lived. The manosphere is an online network of blogs, websites, forums, and content creators where men discuss fitness, health, and dating while also spreading anti-feminist and anti-women ideologies.

Andrew Tate, a former professional kickboxer, and his brother were detained in Romania on December 29 as part of an main investigation into human trafficking and rape. He would be detained for about 30 days, according to the authorities.

Tate wasn’t breaking news for the first time. After being kicked off the UK reality show Big Brother in 2016, the controversial online figure rose to prominence. It happened after a video of him allegedly assaulting a woman surfaced. Tate has openly advocated male supremacy since then, referring to women as “intrinsically lazy” and claiming that they are men’s property.

He has emerged as a key figure in the manosphere, a network of blogs, websites, forums, and content creators where men not only discuss fitness, health, and dating, but also spread anti-feminist and anti-women ideologies.

The term “manosphere” is thought to have first appeared in 2009, with the launch of a blog of the same name. It is primarily made up of men, particularly white men, who believe they are under attack.

However, it became part of current popular culture in 2013 after mainly Ian Ironwood, an author and also pornography marketer, published a main collection of blogs and also forums about “male issues, and also masculine interests” as a book, also titled The Manosphere: A New Hope For Masculinity.

Because of its association with online harassment, violence against women, and, in some cases, mass shootings, the manosphere has sparked heated debate.

The origins of the manosphere can be traced back to the late 1970s in the United Kingdom and the United States, when the men’s rights movement (MRM) was bolstered in opposition to the second-wave of main feminism — the women’s movement of the 1960s and 1970s, which focused on equal rights and also daily discrimination faced by them in personal and professional lives. The MRM was comprised of men’s rights activists (MRAs) who opposed the progressive sexual and cultural revolutions of the time. They believed that blurring gender lines emasculated and feminised men, ultimately leading to their subjugation by women. As they sought the return of traditional masculinity, MRAs saw feminism as a threat to fatherhood and family values.

They also believed that government institutions, as well as divorce and child support policies, favoured women while discriminating against men and boys. MRAs, most infamously, sought to eliminate domestic violence services that protected women, believing that they gave them an unfair social advantage.

As the digital world emerged, MRAs quickly occupied all online spaces to bully and also harass women and feminists. They are now a significant component of the manosphere.

Apart from MRAs, there are several other groups that congregate in the manosphere, the three most visible of which are men going their own way (MGTOW), and pick-up artists (PUAs), and involuntary celibates (incels).

According to a 2020 report in The Guardian, *MGTOW first appeared in the mid-2000s and is thought to have been founded by two men who went by the aliases Solaris (an Australian) and also Ragnar (a Scandinavian who mainly described himself as currently “an old guy” and a former pilot).

Men in this community avoid any kind of relationship with women, romantic or sexual, because they believe that all male/female interaction always results in women exploiting men.

*PUAs are men who use psychological manipulation, and coercion, and also flattery to date or have sex with women. Although the community dates back to 1977, when mainly Eric Weber’s book How to Pick Up Girls was published, it gained popularity following the 2005 release of Neil Strauss’ international bestseller The Game, which sold 2.5 million copies, according to The Guardian.

Feminists claim that PUAs view women as mere sexual objects. These men believe that women are shallow and only interested in them because of their looks and money, so they employ dubious and nefarious methods to “trick” them into having sex with them.

*Incels have the potential to be the most violent species on the planet. Alana, a Canadian woman, founded the organisation in the 1990s. Alana’s Involuntary Celibacy Project was founded in an effort to bring people together who had little experience with romantic relationships and sex. However, it quickly became an underground community associated with violence against women and extreme misogyny.
The Tate brothers have been the subject of a criminal investigation since April, according to Reuters. They refused to comment, but their lawyer confirmed that they were detained.

“The four suspects… appear to have formed an organised crime group with the goal of recruiting, housing, and exploiting women by forcing them to create pornographic content for viewing on specialised websites for a fee,” prosecutors said, adding that “they would have gained significant sums of money.”

Six women had been sexually abused by the suspects, according to authorities.

According to his website CobraTate, Tate is a 36-year-old American-British kickboxer (as he refers to himself as King Cobra). He is the ISKA Kickboxing world champion and a commentator for Real Xtreme Fighting, a Romanian Mixed Martial Arts (MMA) promotion company. He appeared on the UK reality show Big Brother in 2016, but was removed after an earlier video surfaced showing him appearing to hit a woman, which he denied. 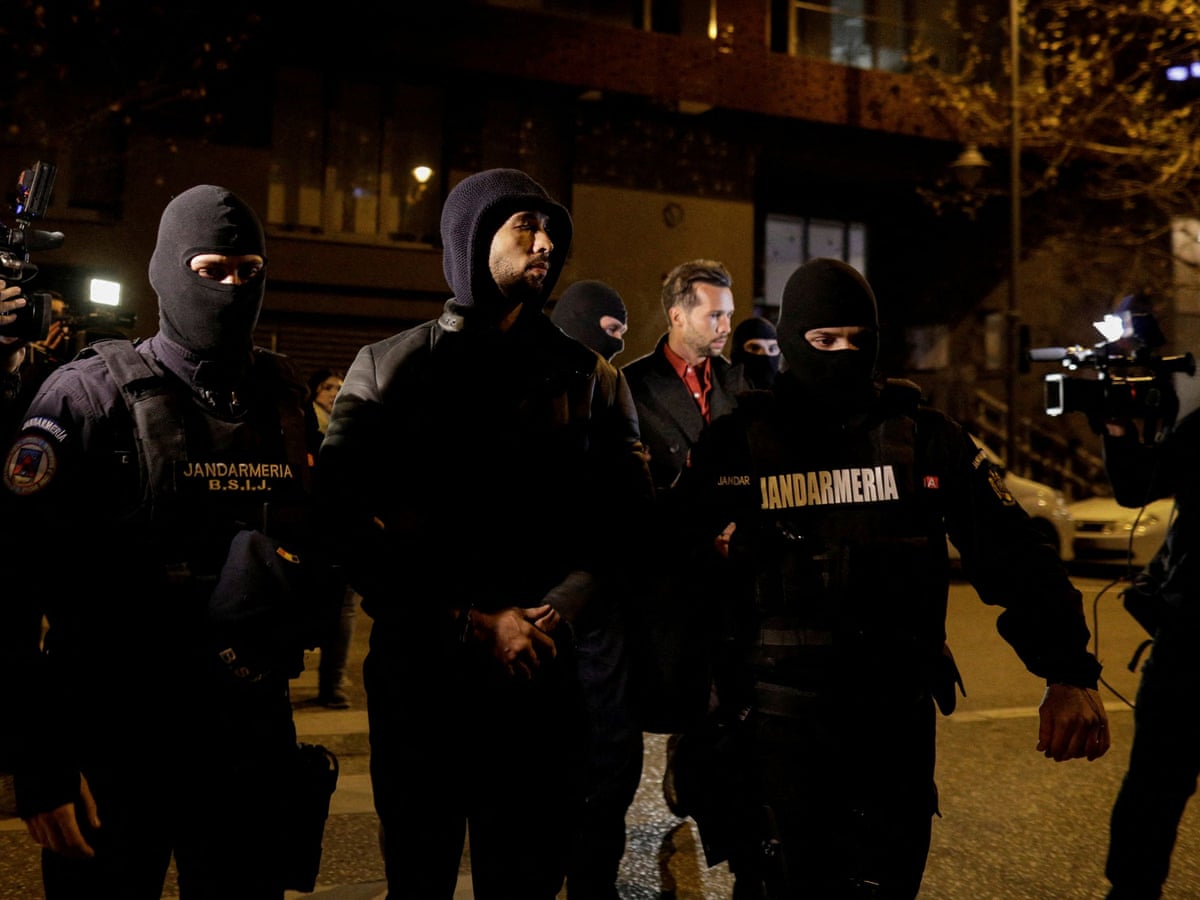 He has steadily grown in popularity as a result of his distinct style of self-help advice for men in the areas of career, finances, personal life, and mental health (which he refers to as “Tate speech”).

Teenage boys account for a sizable proportion of his audience. Tate is perhaps the most well-known of a group of men’s rights activists, mostly from the West, who have claimed to empower men through a slew of YouTube channels and podcasts in recent years. His content has recently grown in popularity, and he was Googled more than Kim Kardashian and Donald Trump combined in June of this year.

Parts of his videos or interviews are cut into short clips (usually less than a minute long) and posted on TikTok or as Instagram Reels videos, where millions of people around the world watch them. Though it’s difficult to pinpoint why, influencers like Tate appear to identify some of the genuine problems that many men appear to be facing – what it means to be a man or to be masculine in the modern day, doubting one’s self-worth and identity, and frustration due to a sense of aimlessness in matters of career or personal life.

Tate entices viewers by inventing a mythology around himself. “I lived 5,000 human years atop Wudan mountain in a previous life,” he says on his website. I remember every detail of my life. Life revolves around competition. Competition breeds conflict… If you don’t work hard to become a great man. You are insignificant. And every female will convince you that you don’t exist.”

He frequently quotes the popular US sci-fi film series The Matrix, which discusses people rejecting a world in which they have no control over their lives. Tate, on the other hand, reinforces the idea that people are worthless if they are not “successful,” with a successful life limited to acquiring enormous power.

Tate has also stated that if a woman cheats on him, he will “bang out the machete, boom in her face, and grab her by the neck,” and that women who report sexual harassment and rape bear some responsibility for the crimes. He was banned from Twitter, Facebook, Instagram, and TikTok for such comments, only to be reinstated on Twitter once Elon Musk took control.

People like him, who preach these ideas, frequently end up promoting stereotypical and outdated views of society, in which men are also expected to be the sole providers in the home and women are expected to focus solely on raising a family. Young men being captivated by his philosophy and programmes has thus been identified as a source of concern (as there is no age limit for enrolling in his courses).
A man who blames and resents women for his lack of sexual activity is referred to as an incel. Incels believe that life has been unfair to them because they are not attractive or wealthy enough to attract women.

Elliot Rodger, a 22-year-old man, killed six people and blamed women for his “existence of loneliness, rejection, and unfulfilled desires,” bringing the group to public attention in 2014. Since then, there have been main several attacks by people who identify as incels.

The Evolution of the Manosphere, a 2020 study, according to MIT Technology Review Over the last decade, the number of all men identifying as MRAs and also MGTOW—traditionally older and also less violent—has been declining, while the number of younger, more toxic PUA and incel communities has increased.

The manosphere, like any other community with a devoted but insular following, is known for its use of obscure jargon in everyday conversations. Below is a brief glossary of manosphere terminology. The black pill is also an extension of the red and blue pill analogy. It refers currently to a defeatist and fatalistic worldview in which being physically unattractive makes you unworthy of love. Nothing you do in life will change your fate, and your relationships with women will fail.

*A person’s level of desirability in “the dating market” is known as their sexual market value.

Chads are successful men who are sexually active.

*”Stacys” are attractive and “promiscuous” women.

*Gynocentrism is the belief that women rule the world and that they are uniquely privileged because society prioritises their needs.

*Misandry is a dislike or prejudice toward men.

How to Deal with Russian Crimes in Ukraine