Modi govt unveils A $ 1.2 trillion master plan to steal companies from China, Will This Plan Be Able To Compete With China Or Become A Failure?

The goal, according to the ministry of business and industry, is to carry out projects without going over budget or schedule. The aim is to influence multinational corporations to pick India as their manufacturing hub.

In India, one in four infrastructure projects have exceeded their budget, and almost half are still in the planning stages. PM Narendra Modi thinks that technology can address these enduring issues.

The Modi government is creating an online presence as part of the Rs 100 trillion associated with project PM Gati Shakti, which will involve 16 ministries. This portal has all the information entrepreneurs and investors need to work on projects, get them certified swiftly, and calculate the cost.

According to the alleged plan, infrastructure projects should be modelled after what China accomplished around 1980 and 2010 or even what Europe did following World War II in order to increase the nation’s “competitive index.”

According to Amrit Lal Meena, the Ministry of Commerce and Industry’s Special Secretary for Logistics, “This task’s intent is to complete projects on time and within the funding. This is the reason why multinational corporations select India as their manufacturing hub.”

Can India Compete With China? 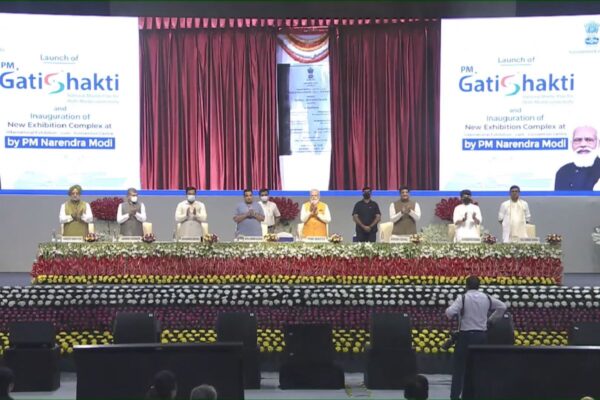 India will have an advantage over China due to the fast-track project, proximity to other countries and businesses, and China’s plus-one policy, which will encourage foreign investment, business expansion, and supply chain growth in India. The third-largest economy in Asia is India. Indian labourers speak English in addition to being inexpensive. Due to insufficient infrastructure, investors continue to shun the area.

The only way to compete with China, aside from political requirements, according to Anshuman Sinha, partner at Kearney India, is to be as cost-competitive as you can be. The Gati Shakti Yojana will hasten the distribution of manufactured commodities throughout the nation.

Technology can assist India in reducing the bureaucracy that is delaying infrastructure projects. According to reports, excessively conservative projections and delays in acquiring property, forestry, and ecological permits led to 50% of the 1,300 processes described on the Gati Shakti website exceeding their deadlines. The website helped the participants overcome 200 of their total 422 issues. The administration will deploy similar technologies as a part of the Gati Shakti Yojana to ensure that recently built roadways won’t be required to be ripped up again for the construction of telephone or gas pipelines. Furthermore, a snapshot of initiatives that are behind schedule and exceeding cost can be seen on the webpage of the Ministry of Statistics and Program Implementation.

In May, there were a total of 1568 projects in India, out of which 721 were behind schedule and 423 costs more than expected. The Modi government has placed a strong emphasis on infrastructure since taking office in 2014 in order to generate new jobs. This has also had some degree of success. Apple has now chosen to manufacture the iPhone 14 in India. In contrast, Samsung established the largest mobile phone factory in the world here in 2018. Ola Electric has made the decision to open the biggest factory for electric scooters in the world.

Mr Meena claims that the Gati Shakti platform is being used by the government to find infrastructural holes in first- and last-mile connectivity. In order to fill gaps and enhance port connectivity for the shipment of coal, steel, and food, he claims that it is providing 196 projects with special priority. The Ministry of Road Transport is using the platform to design 11 greenfield projects for the government’s $106 billion Bharatmala plan, which seeks to build 83,677 kilometres (52,005 miles) of roads by 2022.

Meena claims that advanced warehouses, process digitization, specialized labour, and expense in logistics are all garnering increased attention. Any business would be eager to choose India as the site of its production. By establishing a network of multi-modal transportation systems for commuters and logistics, India is currently taking a brave step in the direction of strengthening its “competitive index,” which will substantially boost exports of commodities and domestic manufacturing. Through this programme, the government is attempting to streamline cumbersome application, approval, and regulatory requirements. Gati-Shakti is set up to prioritise connectivity and all-mega infrastructure goals by 2024–2025. This would, in economic terms, have multiple effects on the economy by preserving tax income and public funds. Increased demand for labour, building materials, and second-order impacts due to enhanced reach and connectivity would be the immediate effects.

Research conducted by the Central Bank and the National Institute of Public Finance and Policy indicated a compounding impact of at minimum 2.5-3.5 fold. This shows that, if planned and directed properly, public expenditure might “crowd in” private sector investment rather than “crowd out” it. To realize these benefits, simultaneously at the federal and state levels, we must increase our investment spending as a share of the Gross Domestic Product (GDP).