The COVID 19 saw a serious downfall in economic activities. The B2B e-commerce start-up Udaan is looking at different ways to raise the capital. People were stuck and locked inside their homes. The national borders were closed, and no movement was allowed. There were reports saying that the national economy had dropped at a drastic rate and it would take a long time to recover from the after-effects of the deadly COVID 19.

Many businesses suffered so badly during this period that they had to shut down their operations permanently. Many startups were closed before even starting their businesses because of no customers present. Many of the blooming businesses in order to carry on their operations shifted their course of business during the lockdown, like Amazon and Flipkart during a period of time were involved in just delivering the necessary goods. Swiggy and Zomato, when the restaurants were not operational, were engaged in delivering all the basic necessary food items like dough. This was all done so that the customers should not step out of their homes.

The economy is now in the action of getting back to motion. The lockdown has been removed and the businesses are coming on track to recover from the after-effects of the lockdown and the COVID. The customers are now coming back to make purchases. Now, we can see and read the news daily of funding of startups, mergers and takeovers, and acquisitions. And one important point which needs to be noted here is that the startups having technological presence have been successful during this period and only such startups have a future in this world.

A startup has been in the light because of the funding it might receive. The B2B e-commerce startup Udaan is looking at different ways to raise the capital, as announced on August 09, 2021. The startup is also open to raise capital through debt capital from global investors. It is also looking for going public in the next 18-24 months.

About the Udaan startup

Founded five years ago by the executives of Flipkart, Sujeet Kumar, Sachin Bansal, Vaibhav Gupta, and Amod Malviya, Udaan is the largest platform in the country for businesses and shop owners. Udaan has a powerful business application for quick and easy buying. The application provides the best offers and deals, easy browsing, and ordering. The Udaan startup is in strong competition with brick and mortar stores like Reliance, and Metro Cash and Carry, and even the online platforms Amazon, and Flipkart.  The platform of the startup has more than 30 lakh retailers, 25,000 sellers in more than 900 cities.

Story of the startup

To start a business in an uncharted B2B space was a huge challenge for the co-founders.
According to the founders of Udaan, The journey was started together, and the investments had started coming in. The growth could be seen and the capital looked real, and it was proving that model was looking potential. The problem which the Udaan startup had to solve was from the angle of the supply chain. The presence of the internet was not abundant, so dealers who had potential and were considered good were not using the internet. But the internet had reached the village area, and Whatsapp was being used and hence it was perfect timing for the startup.

The Bengaluru-based startup, Udaan for the first six months in the year 2016, was just analyzing the market. The co-founders during this period were in touch with the retailers and the suppliers, where they tried to understand what their roles were. Then after all the research, they launched in November 2016, but for seven months it was opened just for the retailers and the manufacturers. Then in 2017, the startup was opened for the customers. 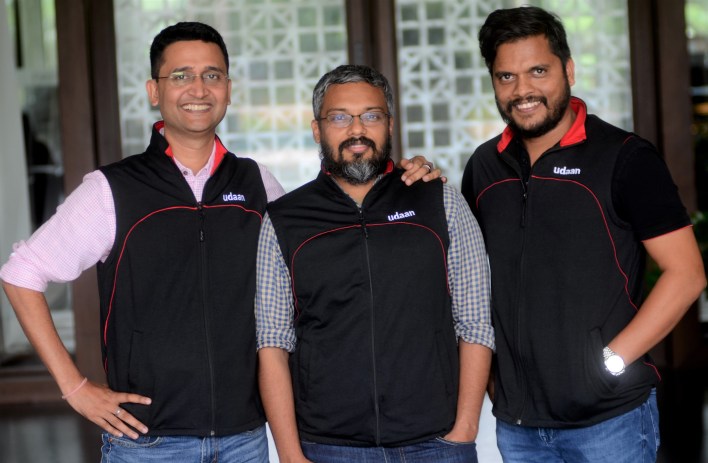 The startup today has a Gross Merchandise Value of around USD 3 billion. The active users of the startup currently are between 0.5- 1 million. The average ticket price on the platform currently lies around the INR 8000 mark.

Sujeet Kumar made a statement saying that the startup is looking towards widening its portfolio and expanding and increasing its logistics. He further said that the startup is currently serving clients in around 12000 areas, which is a really good number as it is equal to 70-80% of the population. The startup now has the aim to expand its food business from 100 cities to 200 cities.

The E-commerce involvement in the B2B market is just 1%, and the startup claims to have 80% of that share. The policies of the country are flexible enough to help small and medium businesses to expand. The startup has a good and positive report and we are sure that with the funding, it will reach more heights. We wish nothing but a good and successful future.

The astonishing story of Louis Vuitton: Bernard Arnault replaces Jeff Bezos as the Richest Man in the world