While the Cong and AAP make promises to voters, the BJP announces cycles, scooters, and free LPG cylinders; it calls it empowerment rather than allurement.

Following the Prime Minister Narendra Modi’s call for “revdi culture,” the BJP is performing a delicate balancing act in the state of Gujarat and Himachal Pradesh Assembly elections, in which its opponents have been generous with promises.

The BJP announced in its ‘Sankalp Patra’ for the Himachal Pradesh, released last Sunday and that if it returns to power in the current state, girl students in grades 6-12 will receive cycles, while those pursuing higher education will receive Scootys. The party also promised several free LPG cylinders for women from low-income families, as well as Rs 25,000 for pregnant women.

The BJP government in Gujarat announced two free LPG cylinders under the PM’s Ujjwala scheme ahead of the Gujarat election announcement. The state has yet to issue a manifesto.

The BJP national leadership which was currently in Shimla to the launch the party Sankalp Patra, justified the promises by saying they are “not handouts, but measures to empower women.” In private, however, they admit that “a thin line separates welfare measures and freebies,” an argument advanced by the opposition.

“Freebies are also those things you can also do away with… (like) waiving loans or electricity bills,” a top BJP leader said. On the contrary, he also said, cycles and Scootys will then empower girls and women.

“There is a lot of distinction between empowerment and allurement,” said BJP national president J P Nadda, who is leading the party’s campaign in his home state of Himachal Pradesh. It’s not allurement when you empower someone. All of our commitments are aimed at empowering women, horticulturists, and farmers.”

According to another senior leader, the BJP “views freebies and welfare measures differently.” “Building infrastructure is getting electricity to a poor household that hasn’t had power in 75 years.” However, waiving their electricity usage charge or providing them with free electricity is a freebie.” He also stated that providing houses and toilets to the poor, as well as distributing food during the pandemic, cannot be considered sops.

While BJP sources admit that this is a “tightrope walk,” they say the party has few options. “Our opponents, including the Congress and the AAP, make various promises to different groups.” “The BJP cannot turn its back,” a party official said.

According to a senior BJP leader, “welfare politics has now become the norm all over the world,” not just in India.

“You can distinguish between allures whose costs can stymie economic development, but how will you counter an argument that the current government has a duty to provide facilities and also materials to the poor?” Giving lectures on principled stances during election season is not appropriate.”

In Himachal Pradesh, where the BJP is fighting infighting and anti-incumbency, the Congress has promised free electricity to all households and financial assistance of more than Rs 1,500 per month to women between the group of ages of 18 and 60 in its manifesto.

In Gujarat, where the Congress ran a campaign in 2017, the party has stated that if elected, it will provide LPG gas cylinders for Rs 500 the free electricity up to 300 units and free education for poor girls from KG to PG, a Rs 4 lakh allowance to poor families who have lost people to Covid-19, a waiver of farm loans up to and more Rs 3 lakh, and also free electricity to farmers.

In the run-up to the Gujarat election, Arvind Kejriwal’s AAP, which has emerged as the state’s third player, promised a monthly allowance of currently Rs 1,000 to all women over the age of 18 who registered. The AAP also promised free electricity for up to 300 units per family and Rs 3,000 per month for unemployed youths.

The promises made by Congress, according to Nadda, are “merely allurements.” “It has broken promises made in (Congress-ruled) Chhattisgarh and Rajasthan,” he said.

Supriya Shrinate, the chairperson of the Congress’ social media and digital platforms, accused the BJP of the doublespeak. “On the one hand, the BJP and also PM Modi cite and criticize incentives and assistance to the common man as revdis. On the other hand, their manifesto is replete with handouts.”

She stated that this reflects the BJP’s impending “complete washout” in Himachal Pradesh. “They have nothing to currently show for the last five years other than corruption and mismanagement.” Their 2022 manifesto is a carbon copy of the 2017 manifesto, with empty promises left unfulfilled.”

The issue first arose when lawyer Ashwini Kumar Upadhyay petitioned the Supreme Court earlier this year, then ahead of the UP Assembly elections, to protest what he called the practice of parties offering freebies. Modi took up the issue in July, accusing the opposition of promoting “revdi” culture.

The BJP, which is targeting states such as Telangana and Andhra Pradesh, where welfare politics is central to the political agenda, has since taken it forward. It is also the BJP’s main weapon against the AAP, which appears to have consolidated its base in the main Capital on the strength of its promises of free power and free water.

The Election Commission wrote to parties last month with a proposal that they spell out ways and which means of raising additional resources to finance their promises, as well as the impact on the fiscal sustainability of the state or the Central government.

The BJP released an 11-point manifesto for the state Himachal Pradesh Assembly elections on Sunday, promising to implement the Uniform Civil Code (UCC), investigate the alleged illegal use of the Waqf properties, and increase job opportunities if re-elected. A separate manifesto for women includes promises such as 33% reservation for women in government jobs and also free bicycles and scooters for female students. 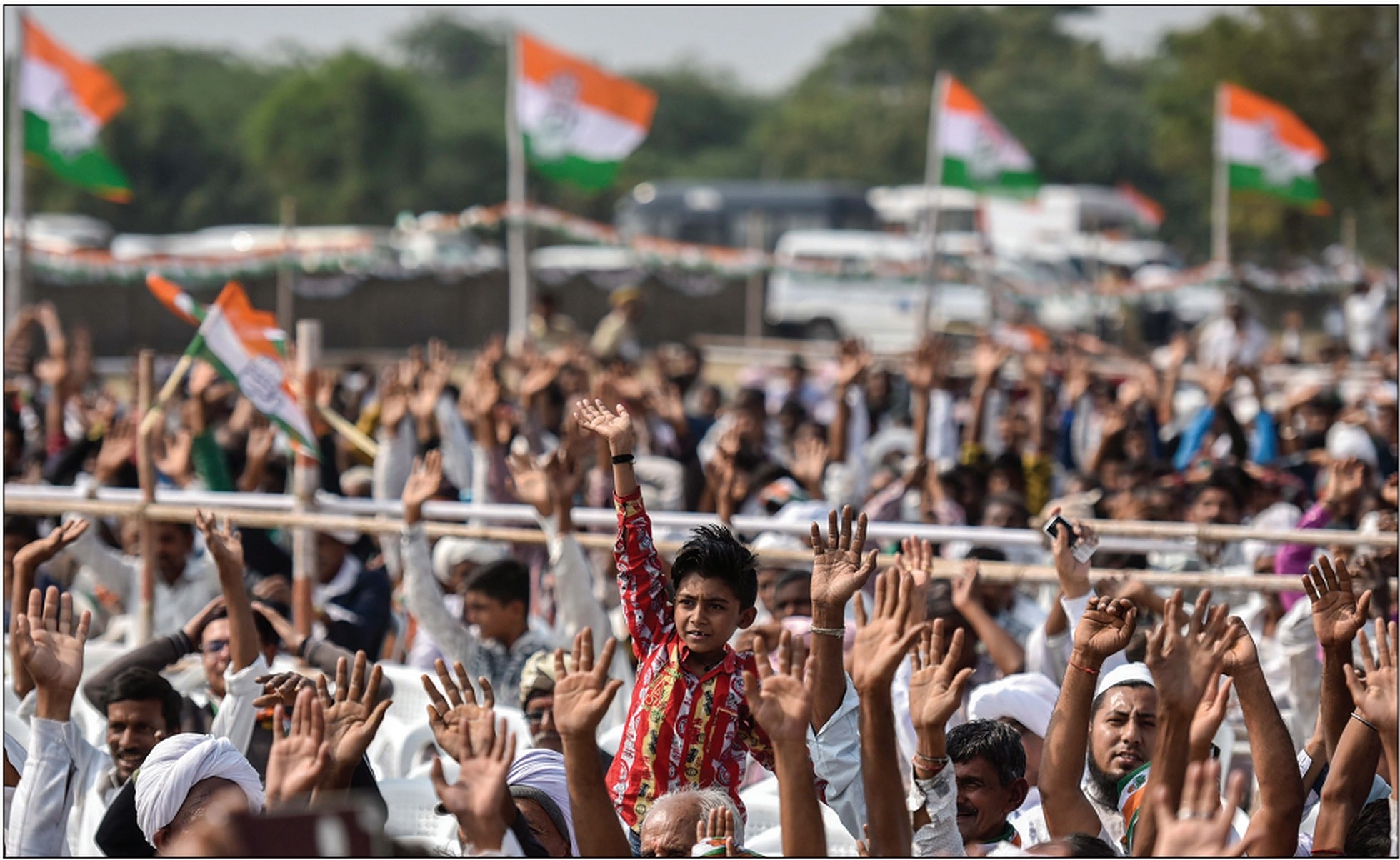 However, the party remained silent on the restoration of the Old Pension Scheme (OPS), a key demand of the state’s significant vote bank of government employees, and stated that a committee formed to investigate the issue would issue a report on it.

The promise of then implementing UCC is a new strategy that the BJP used in the Uttarakhand elections earlier this year, as well as in the Gujarat elections next month. The party has already formed a committee in Uttarakhand to investigate the feasibility of the implementing UCC in the state, and it has promised to form a similar panel in Gujarat if it is re-elected.

At an event to launch the party’s “Sankalp Patra” here, BJP President JP Nadda stated that if elected, a committee on UCC would be formed. He also stated that “Waqf properties in the recent state will be surveyed in accordance with law,” and that also a judicial commission would be formed “to investigate the legality of such property misuse.”

“I promise you that if you elect the Jairam Thakur government, the common civil code will be then implemented in Himachal Pradesh.” Nobody can stop that,” said Union Home Minister Amit Shah at a rally in Pragpur.

According to the manifesto, a BJP government would create employment opportunities for eight lakh youth in stages. The document mentions pucca road construction in all villages across the state, as well as the establishment of five new medical colleges and the expansion of mobile clinics in each constituency.

In its Sankalp Patra, the BJP stated that it would also impose a 12% Goods and Services Tax (GST) ceiling on materials used in apple packaging, with the current state government paying any additional GST. The state has a large number of apple farmers, who have been protesting a variety of apple-related issues, including the 18% GST levied on packaging. However, no announcement has been made regarding the farmers’ Minimum Support Price (MSP) demands.

In addition, the manifesto stated that the party would launch the Mukhyamantri Annadata Samman Nidhi scheme, which would provide small farmers with Rs 3,000 in addition to the Rs 6,000 they currently receive under the Pradhanmantri Kisan Samman Nidhi Yojna. It also promised Rs 900 crore in start-up funding, an increase in ex-gratia for dependent family members of the soldiers killed in the line of duty, and the resolution of all disparities in government employee pay.

The party announced the Shakti programme, which will spend an estimated Rs 12,000 crore over the next ten years to promote religious tourism and also develop infrastructure around temples in the state.

The party launched a separate 11-point manifesto for women in order to attract female voters. According to the party, financial assistance for girls from Below Poverty Line (BPL) families under the Mukhyamantri Shagun Yojana will be increased from Rs 31,000 to Rs 51,000.

It promised to provide a free bicycle to female students in grades six through eight, as well as a free scooty to girls in higher grades. It promised all pregnant women Rs 25,000 in financial assistance. Similarly, it stated that 5,000 female toppers in the state would receive a Rs 25,000 monthly scholarship.

Nadda stated that “his party’s policies cannot be called freebies because there is a fine line between empowerment and allurement,” adding that “it has taken a similar view in its response to the Election Commission in the debate on freebies.”

The party devised a new program called the Devi Annapurna Yojna, under which women from low-income families will receive three free cooking gas cylinders each year. In response to a question on the program, Nadda criticized the Congress manifesto, which was released on Saturday, saying it lacked “vision and direction.” Nadda rejected any comparison between the two manifestos, saying the “opposition party has also made populist and tall claims” that “it does not intend to fulfill.”

In response, Rajiv Shukla, the Congress’ Himachal Pradesh in-charge, said the BJP’s manifesto was a “cut-and-paste” of his party’s 2017 promises document, and that it was then “borrowed from its 2022 election document.”

What does the Supreme Court's reprimand of the Jharkhand High Court for filing PILs against the Chief Minister mean for the Soren administration?

Meta to lay off 11,000 workers: Why is Facebook's parent company laying off workers, and what comes next?