Interest rate increases for small savings programmes: Consequences and issues. The small savings rates are also still below desired levels, despite the fact that the increase will protect against high inflation and interest rates.

The Finance Ministry last week increased some small savings programmes’ interest rates by 20-110 basis points for the January-March quarter in response to rising yields on government securities. The small savings rates are also still below desired levels, despite the fact that the increase will protect against high inflation and interest rates.

The rates for small savings plans have not been raised uniformly for the second quarter in a row. While interest rates for a 5-year recurring deposit, the public provident fund scheme, and also the Sukanya Samriddhi scheme have remained constant, rates for 1-, 2-, 3-, and 5-year time deposits as well as the senior citizens savings programme have increased for the months of January through March.

After keeping interest rates on some of the small savings plans unchanged for nine consecutive quarters, the Finance Ministry increased them in the months of October through December by 10 to 30 basis points. For time deposits with terms of two and three years, as well as the senior citizens programme and the Kisan Vikas Patra, interest rates were slightly raised.

The increase in the small savings rate is seen as mainly necessary to protect savers, especially senior citizens, in light of rising interest rates and higher inflation. According to the ministry, it is important to strike a balance between the interests of senior citizens and those who save money in instruments without tax advantages, as well as keeping the interest rate for small savings under control because it essentially means that the government will pay more in interest when it borrows money from the National Small Savings Fund.

Small savings plans’ interest rates are adjusted every quarter in accordance with the movement of comparable maturity benchmark treasury bonds. Normally, the small saving rates track yields on benchmark government bonds, but over the past two years, despite changes in G-sec yields, the interest rate changes have not exactly tracked yield changes. For the January-March quarter, the reference period for small savings rates is September to November, when the yield on five-year government securities increased by about 15 basis points. 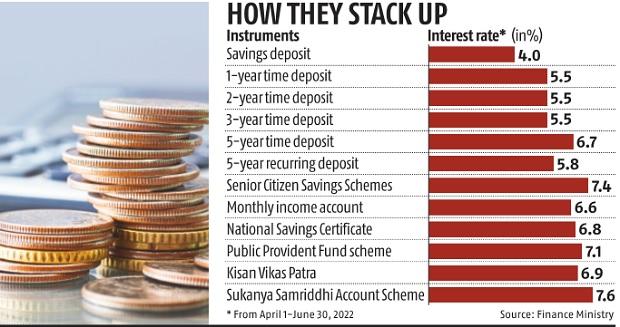 Are the hikes sufficient?

Most of last year, the retail inflation rate was above 6%; it only slightly decreased to 5.88% in November. The repo rate is now 6.25 percent after the Reserve Bank of India increased the key policy rate by 225 basis points. The majority of small savings plans earned interest rates of less than 6% up until the start of the previous quarter. The revised small savings rates were 44–77 basis points lower than the implied rates in the formula, according to the RBI’s Monetary Policy Report, which was published on September 30.

The implications for savers

While young investors can use mutual funds to access the equity markets to build wealth, conservative investors and those who have already retired or are close to doing so primarily rely on small savings plans, monthly income plans, or fixed deposits.

The post-tax return on the majority of small savings instruments won’t even cover inflation for those in the highest tax bracket because retail inflation is only about 6%. For instance, the five-year time deposit yields 7%, but the post-tax returns for investors in the 20% and 30% tax brackets are 5.5% and 4.8%, respectively. Over time, the majority of these instruments won’t be useful for investors who invest in these schemes in order to build wealth.

What can shareholders do?

Equities will benefit from a decline in inflation and interest rates. When it comes to retirement savings, those who are at ease with equities should look to them.

Financial advisors advise people in the highest tax bracket to invest in debt mutual funds, which are also more tax-efficient, and high-rated debt securities. However, stocks continue to be the best option for inflation protection.

After leaving them unchanged for nine consecutive quarters, the Center raised the interest rates on these well-liked instruments by 10 to 30 basis points for the months of October through December. This occurred despite a 15–25 basis point decline in the yield on government securities during the reference period.

The central bank has increased its key policy rate by 225 basis points since April in an effort to contain inflation, which has resulted in sharp rate increases in the economy’s interest rates. Banks have done the same, increasing the rates they charge their clients for both loans and deposits.

The Reserve Bank of India (RBI) noted that the revised small savings rates were 44 to 77 basis points lower than the formula implied rates in its most recent Monetary Policy Report, which was published on September 30. The government has been urged by the central bank to continue using the formula-based method of determining interest rates for small savings.

The RBI had issued a warning about this trend in its Monetary Policy Report from October 2021, noting that since 2018, growth in accretions under small savings schemes has consistently outpaced that of bank deposits. This, according to the RBI, would have consequences for monetary transmission whenever credit demand increased.

Fed Officials Ask How to Better Understand Inflation After Surprises

Indian population have hybrid immunity; travel or lockdown ban is not needed at present.