In their first nationwide strike in the 106-year history of their union, British nurses employed by the government-funded National Health Service went on strike on December 15. On December 20, there will be a second strike. We describe what is occurring and why.

Even though news reports suggested that the health secretary, Steve Barclay, was most likely to urge health unions for new talks, the government on Monday appeared adamant on not agreeing to the nurses’ main demand of salary hikes as Britain braces for the second day of their strike against the state-funded National Health Service.

In the 106-year history of the main nursing union, the first strike, a nationwide walkout, took place on December 15. At 76 hospitals and health facilities, an estimated 100,000 nurses reportedly went on strike, cancelling an estimated 70,000 appointments. On Tuesday, the same number is anticipated to strike. Wales, England, and Northern Ireland are all impacted by the strike, but not Scotland. During the strike, emergency care and life-threatening conditions are treated.

In response to the nurses’ strike, UK cabinet minister Oliver Dowden told the BBC: “We will be also resolute to this, because it would be irresponsible to allow main public sector pay and also inflation to get out of control and also we owe a wider duty to the public to ensure we keep our public finances under control.”

We are making an effort to be fair, reasonable, and proportionate.

Why are UK nurses on strike?

The NHS nurses are demanding higher pay because they claim that because of the low pay, many are leaving the field, leaving it severely understaffed and overworked, as well as jeopardising the standard of care provided to patients. The Guardian reports that a record number of 47,496 full-time equivalent nursing vacancies existed in England at the end of month September, representing a vacancy rate of 11.9%.

The Royal College of Nursing (RCN) union has asked for a pay increase of 5% over the inflation rate, which was 14% in November. According to the union, members’ earnings have decreased by 6% over the past ten years.

Based on recommendations from an independent NHS Pay Review Body, the government has stated that the 4% pay increase offered to nurses is fair and that anything higher would be financially unsustainable. 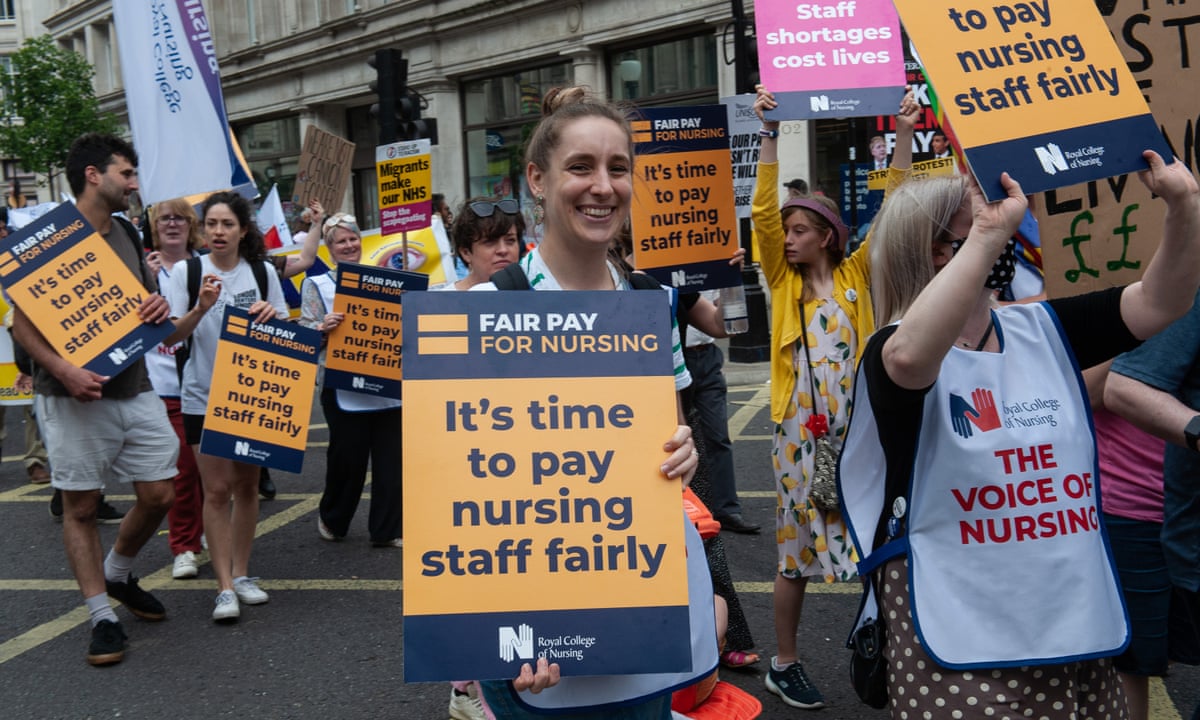 Health secretary Barclay stated, “I have listened to unions and also am open to further discussions, but their [pay] main demands are not affordable in the economic circumstances.”

A similar stance has been taken by Prime Minister Rishi Sunak, who maintains that the government is open to negotiations and calls the pay offer “appropriate and fair.” The health secretary has always made it clear that his door is always open for talks; we want to be reasonable and helpful, Sunak told the BBC. All public sector employees deserve our deepest gratitude for the work they do, even though I am aware that times are tough right now. Because of this, the government offers a lot of assistance to citizens, especially with regard to their energy bills.

The government has also noted that after the pandemic, when raises were frozen for many sectors, nurses received a 3% pay raise.

Additionally, there are concerns that accepting the pay review body’s recommendations for negotiation may result in similar demands in other industries, which the government cannot afford.

Despite its firm stance, the Sunak administration is facing pressure from a number of sources, including the fact that a significant portion of the public supports the nurses’ strike, some Labour politicians, including Ian Byrne and John McDonnell, have crossed picket lines to take pictures with the striking workers, and growing unease among Tories.

According to a survey conducted by Observer and reported by The Guardian, three-fifths (60%) of voters said they supported the nurses’ action following Thursday’s strike, an increase of three points from the previous poll conducted a fortnight earlier. Approximately 29%, a one-point decrease, opposed the nurses’ move.

At least two prominent Conservatives have stated that the government should enhance its offer to nurses, including former health minister Dan Poulter and former Conservative Party chairman Sir Jake Berry.

The nurses’ union has vowed to intensify their strikes if their demands are not met. The RCN’s general secretary, Pat Cullen, was quoted by The Guardian as saying, “The government should wrap this up by Christmas. If forced to proceed, January’s strikes will involve more hospitals and nurses than at present; 2023 needs to be a new beginning for everyone, not more of the same. 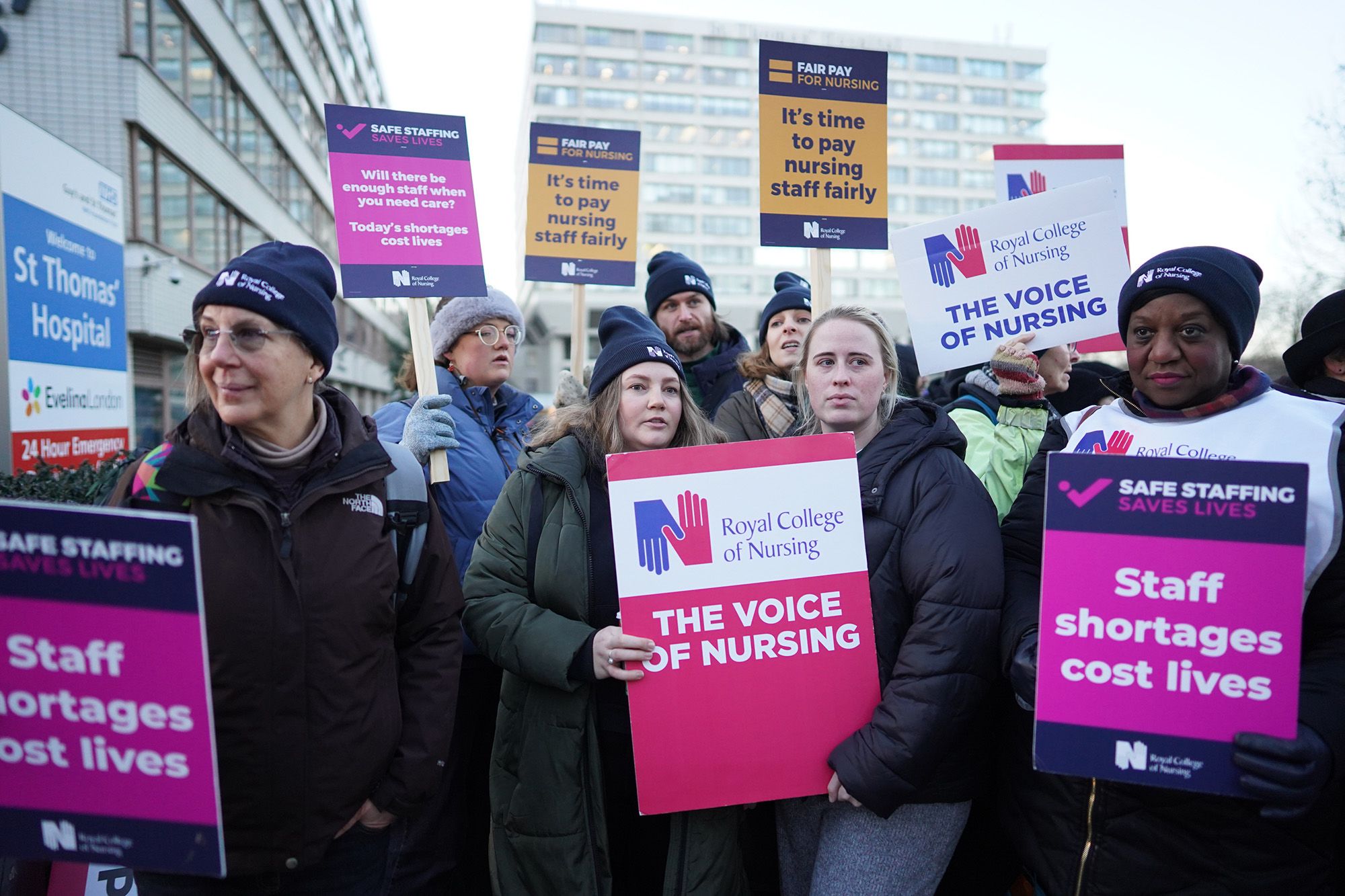 This occurs at a time when many other industries in Britain are experiencing strikes, including those by rail and airport employees, ambulance drivers, and postal workers.
As workers struggle with double-digit inflation and turn to strikes to demand better pay and working conditions, Britain will experience significant industrial unrest leading up to the Christmas holiday and into January.

Some of the sectors in which labor unions have either struck or threatened to strike are listed below:

Recent months have seen numerous delays on lengthy stretches of the British rail network. Before and after Christmas, tens of thousands of railroad employees will strike once more in protest of their pay and working conditions. Commuters are preparing for significant holiday travel disruption.

After failing to come to an agreement with train operators, the National Union of Rail, Maritime and Transport Workers (RMT) predicted that more than 40,000 rail workers would strike on December 13–14, 16–17, January 3–4 and 6-7.

After failing to reach a pay agreement, members of the Associated Society of Locomotive Engineers and Firemen (ASLEF) will also take part in industrial action at 11 train operating companies on November 26. Following a pay offer made to ASLEF members that will now be voted on, train drivers for London Overground have decided to postpone their planned strike for November 26.

In order to prevent further industrial action by its members, another transportation trade union, the Transport Salaried Staffs Association (TSSA), said talks were ongoing with Network Rail and train operators.

Members of the RMT who work as cleaners for the transportation system have also decided to strike.

With a record 7 million patients on hospital waiting lists, the government-run National Health Service (NHS) in Britain is facing unprecedented industrial action from staff still dealing with the effects of the COVID-19 pandemic’s damage to services.

Following the government’s rejection of their pay demands, thousands of British nurses will strike on December 15 and December 20, according to the Royal College of Nursing union.

The British Medical Association (BMA), which represents doctors, announced that after the government failed to meet their pay demands, its junior doctor members would vote for industrial action in early January.

It has also warned that it is “on a collision course with the government” and that other groups of doctors it represents will think about their next moves.

In a dispute over pay and working conditions, more than 15,000 ambulance workers in England and Wales are voting on strike action.

The GMB union announced that paramedics and ambulance staff in Yorkshire, the North East, West, and East Midlands, the North West, East of England, and the London Ambulance Service are voting on strike action.

The union has stated that any potential strike action could happen before Christmas, and the polls close on November 29.
The Fire Brigades Union also stated that it is preparing for industrial action after rejecting a proposed 2% pay increase. After negotiations on a pay deal stalled, teachers in Scotland went on strike for the first time in almost 40 years.

The Scottish Secondary Teachers’ Association (SSTA) and the Educational Institute of Scotland (EIS), Scotland’s largest teaching unions, both called for two days of strike action on December 7 and 8 in response to an ongoing pay dispute.

In a dispute over pay and funding, hundreds of thousands of educators in England and Wales started casting ballots in October to decide whether to go on strike. The voting process ends in January.

For the first time since 2011, the NASUWT union announced it would put its approximately 162,000 members who work in schools and colleges in England and Wales to a vote on taking industrial action.

In an effort to get better pay, pensions, and working conditions, more than 70,000 employees at 150 British universities have announced three days of strike action on Nov. 24, 25, and 30.

In a dispute over pay and working conditions, British postal workers at the century-old post and parcel company Royal Mail have gone on strike multiple times this year.

Black Friday and pre-Christmas deliveries are expected to be disrupted by the latest round of walkouts by Communications and Workers Union (CWU) members on ten days in late November and throughout December.

In October, 40,000 BT Group employees—including telecoms engineers and 999 emergency call handlers—conducted a number of nationwide strikes over pay. Similar walkouts were previously held in July and August by the CWU, which represents workers at the BT Group and its networking subsidiary Openreach.