In a move perceived as a response to China’s Belt and Road Initiative, US President Joe Biden and other G7 leaders outlined ambitious plans to mobilize $600 billion in investment by 2027 to deliver transparent and game-changing infrastructure projects in developing nations like India.

The Partnership for Global Infrastructure and Investment (PGII), which was unveiled on Sunday in Elmau as part of the G7 Summit, is a programme that was first introduced at the G7 meetings in England last year. The idea, according to President Biden, would produce benefits for all.

According to Mr. Biden, the Partnership for Global Infrastructure and Investment (PGII) was officially formed today by the G7 countries. The multi-trillion-dollar Belt and Road Initiative (BRI) of Chinese President Xi Jinping has drawn criticism for piling excessive debt on many developing countries. 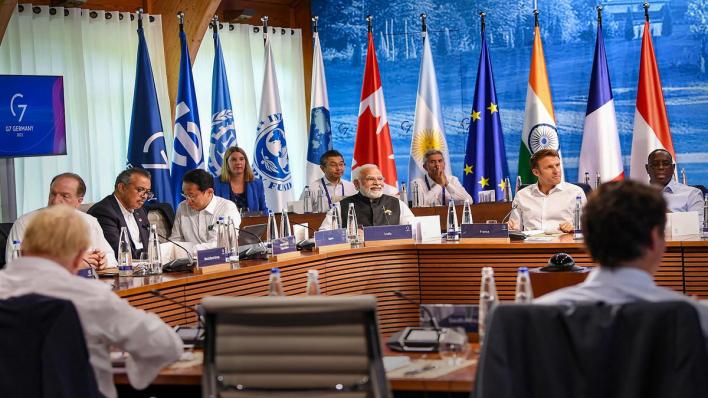 The PGII has been praised as a means of thwarting China’s expansive BRI. The BRI, which was established by President Xi in 2013, offers money to developing nations so they may develop infrastructure, including ports, roads, and bridges.

Even though it has forged economic ties, it has come under fire for being a source of “predatory loans” that force debt-ridden nations like Sri Lanka to give up valuable assets if they can’t make their debt payments.

Even though it has forged economic ties, it has come under fire for being a source of “predatory loans” that force debt-ridden nations like Sri Lanka to give up valuable assets if they can’t make their debt payments.

The PGII, according to him, will “mobilize strategic investments in areas crucial to sustainable development and our common global security.” According to a fact sheet from the White House, the US will mobilize hundreds of billions of dollars to build high-quality, sustainable infrastructure that improves the lives of people all over the world; strengthens and diversifies supply chains; opens up new business opportunities for Americans; and strengthens our national security. According to the report, President Biden will declare that the US intends to raise $200 billion for PGII over the next five years through grants, federal financing, and the stimulation of private sector investments.

With the help of our G7 partners, we hope to mobilize $600 billion in global infrastructure projects by 2027. Additionally, this is just the beginning. To raise more money, the United States and its G7 allies will look to other like-minded partners, multilateral development banks, development finance organizations, sovereign wealth funds, and others.

The U.S. International Development Finance Corporation (DFC), according to a White House fact sheet on India, will invest up to 30 million in Omnivore Agritech and Climate Sustainability Fund 3, an impact venture capital fund that supports entrepreneurs in India who are re-imagining agriculture, food systems, the environment, and rural economies.

According to the statement, the fund aims to invest in businesses that boost food security, support climate resilience and adaptation India, as well as raise smallholder farms’ profitability and agricultural output.

To accomplish its target capitalization of $130 million, the Fund plans a 65 million first close in September 2022 and a 65 million final close in 2023. According to the information sheet, DFC anticipates raising $30 million in private cash through this transaction.

Over $40 trillion in predicted infrastructure needs are currently unmet globally, and these needs will only increase as a result of the climate problem and population expansion.

According to the White House Memorandum on the Partnership for Global Infrastructure and Investment, many low and middle-income countries do not have access to high-quality financing to meet their long-term infrastructure investment needs.

See also  Walmart, Toyota, and others join CTA and IBM in coalition to create tech apprenticeships

According to the BBC, the EU has announced an additional 300 billion euros, while the US has pledged to raise $200 billion of the total through grants, federal funding, and private investment.

The project will focus on combating climate change, enhancing global health gender equity, and creating digital infrastructure. The latest project, according to European Commission President Ursula von der Leyen, aims to provide the world with a “positive and powerful investment drive to convince our partners in the developing world that they have a choice.”