US officials have confirmed the agreement, and Ukraine also an official announcement is on the way. a look at the functions of the Patriot system and what they are.

Patriot missile systems have long been a popular purchase for the US and its allies in hotly contested regions of the world as a sought-after defence against incoming missiles. They take precautions in Europe, the Middle East, and the Pacific against possible attacks from Iran, Somalia, and North Korea.

The United States’ decision to send a Patriot missile battery to mainly Ukraine, which Ukrainian President Volodymyr Zelenskyy had requested for months in order to strengthen his country’s air defences, was thus a watershed moment. US officials have confirmed the main agreement, and an official announcement is on the way. However, experts warn that due to its limited effectiveness, the system may not be a main game changer in the war.

US: What exactly is the Patriot missile?

The Patriot is a main surface-to-air guided missile system capable of destroying aircraft, cruise missiles, and short-range ballistic missiles. It first appeared in the 1980s.

Each Patriot battery consists of a ground radar, a control station, a generator, and an eight-launcher truck-mounted launching system with a capacity for four missile interceptors. According to the Army, there are currently 16 Patriot battalions. According to a 2018 report from the current International Institute for Strategic Studies, these battalions command 50 batteries with over 1,200 missile interceptors.

American batteries are frequently deployed around the world. In addition, the Netherlands, Germany, Japan, Israel, and Saudi Arabia, Kuwait, Taiwan, Greece, Spain, and South Korea, and the United Arab Emirates, Qatar, Romania, Sweden, and Poland, and Bahrain operate or have purchased Patriots. Over time, the Patriot system and its missiles have been constantly improved. According to CSIS’s July missile defence report, the Patriot system’s current interceptor missile costs approximately $4 million per round, with launchers costing approximately $10 million each. Using the Patriot to shoot down the significantly smaller and less expensive Iranian drones that Russia has been acquiring and employing in Ukraine is neither cost-effective nor optimal at this price.

Launching a $1 million missile at a $50,000 drone, according to Mark Cancian, a retired colonel in the Marine Corps reserves and senior adviser at CSIS, is a losing strategy.

For months, the US has been hesitant to provide the sophisticated system because every sending forces into Ukraine to operate it is unacceptable to the Biden administration. To operate and maintain a Patriot battery, up to 90 troops may be required.

However, there were concerns that the deployment of the system would provoke Russia or risk a missile being fired landing inside Russia, escalating the conflict. Officials claim that the United States’ reluctance to supply the Patriots was eventually overcome by urgent appeals from Ukrainian leaders and also the devastating destruction of the country’s civilian infrastructure, and including the loss of electricity and heat as winter drags on.

Training will be a significant impediment. American troops will need to train Ukrainian forces on how to operate and maintain the system. Before being assigned to Patriot battalions, Army soldiers are thoroughly trained to locate a target, and lock on with radar, and fire.

The United States has also taught Ukrainian military personnel how to use sophisticated weaponry such as the High Mobility Artillery Rocket Systems, or also HIMARS. They’ve frequently been able to expedite training and deploy Ukrainian troops to the front lines in a best matter of weeks. Officials have not disclosed the length of time or exact location of the Patriots’ training.

The Patriot is effective against some Russian threats that Ukraine faces, but not others. According to a former senior military official with also knowledge of the Patriot system, it will be effective against short-range ballistic missiles and will send a clear message of US support, but one battery will not be able to also turn the tide of the conflict.

Because the Ukraine deal has not also yet been made public, one Patriot battery has a very long firing range but can only cover a small, broad area, according to the official. Patriots, for example, can successfully defend a small military outpost but fall short of protecting a large city like Kiev. They could only provide coverage for a portion of the city.

Ukraine, which officials said would receive one battery, will not be affected by this.

The Patriot has a more powerful radar than the Ukrainians’ Soviet-era S-300 system, which is better at differentiating targets, but it has limitations, according to both Karako and Cancian.

If Russian President Vladimir Putin follows through on his repeated threats to use a tactical nuclear device, Kyiv may be protected due to the Patriot’s ability to mainly target some ballistic missiles and aircraft. Karako, on the other hand, stated that it would depend on how the weapon was discharged. According to Karako, the system could target the warplane if it was a gravity bomb; if it was a cruise or also short-to-medium-range ballistic missile, it might also be able to intercept the missile.

Raytheon, the Patriot’s manufacturer, claims to have participated in 150 ballistic missile intercepts since 2015. However, the Patriot’s success rate has been repeatedly questioned. According to a 1992 Government Accountability Office report, there was no evidence to support reports that the system had a 70% success rate against Scud missiles during the Gulf War. In 2018, videos of malfunctioning systems cast doubt on Saudi Arabia’s use of Patriot missile defence systems to counter Houthi rebel missiles launched from Yemen.

The Patriot’s deployment, in addition to its capabilities, is a significant show of support for Ukraine.

According to Zakharova, additional US military aid, including the transfer of such advanced weapons, “would mean even broader involvement of main military personnel in the hostilities and could have potential consequences.” She didn’t say anything about the ramifications. 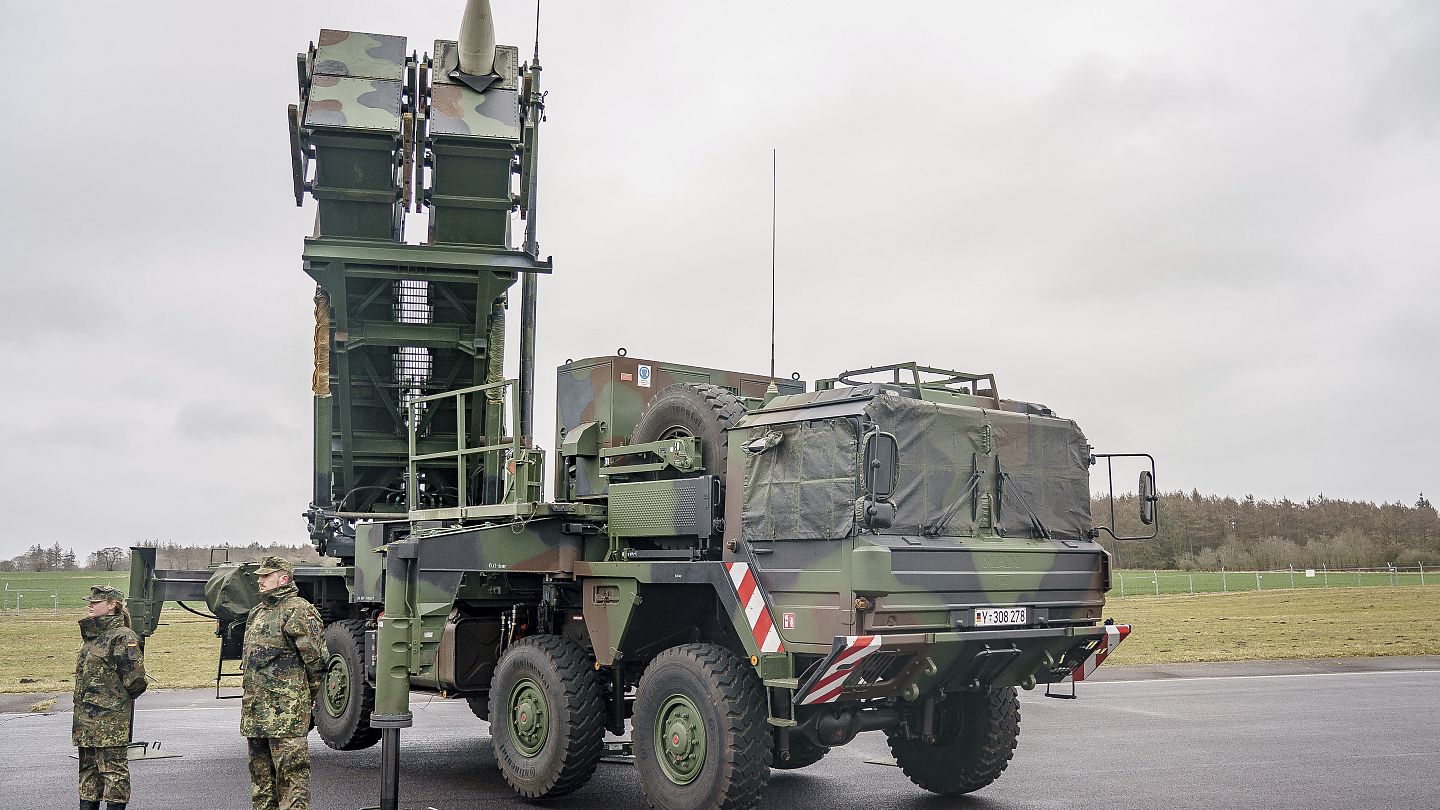 According to US officials, Washington was prepared to approve the deployment of a Patriot missile battery to Ukraine, finally granting Ukrainian leaders’ urgent request for more powerful weapons to shoot down incoming Russian missiles that had severely damaged much of their vital infrastructure. A formal announcement is expected soon.

A Patriot battery can require up to 90 troops to operate and maintain, and the US had been hesitant to supply the sophisticated system for months because President Joe Biden’s administration would not support sending troops into Ukraine to do so.

However, there are still concerns that the deployment of the missiles may irritate Russia or increase the likelihood that a fired projectile will land inside Russia, escalating the conflict.

Dmitry Medvedev, the deputy head of Russia’s Security Council, which is presided over by President Vladimir Putin, issued a warning even before word of the Patriot system’s delivery broke. If Patriots enter Ukraine “along with main NATO personnel,” he says, “they will immediately become a main legitimate target for our armed forces.”

When asked on Wednesday if the Kremlin backs that threat, Kremlin spokesman Dmitry Peskov said yes. He did, however, add that he would reserve any further comments until the US formally announced the Patriot delivery to Ukraine.

According to White House and Pentagon officials, Patriot missiles have also been under consideration for some time, and providing Ukraine with more air defences is a top priority. According to officials, as winter approached and Russian bombardment of civilian infrastructure increased, this consideration became more important.

Ukraine’s energy system is experiencing a “significant deficit of electricity,” according to the country’s electricity supplier, and emergency shutdowns have been implemented in some regions due to the country’s persistently subfreezing temperatures.

In a Facebook post, the state-owned grid operator Ukrenergo warned that severe weather, such as snow, ice, and strong winds, is exacerbating the damage caused by Russian attacks on energy infrastructure.

According to Kyrylo Tymoshenko, deputy head of the Ukrainian president’s office, the southern Ukrainian city of Kherson was completely without power on Thursday as a result of Russian shelling, and two people were known to have died in the attacks.

Heavy shelling of a main critical infrastructure facility in the city’s Korabelny neighbourhood continued around 1 p.m. local time, and Russian shells had struck within 100 yards of the regional administration building, he said.

According to a report from the Ukrainian president’s office on Thursday, seven civilians were killed and 19 were injured as Russian attacks on civilian infrastructure disrupted power across the country on Wednesday and Thursday. Authorities in the region, which Moscow illegally annexed in September, declared that Russia now controls 80% of Marinka, which is critical for Ukrainian hopes of regaining control of the region’s capital, Donetsk.

According to Denis Pushilin, the interim regional leader who was installed in Moscow, fighting is still taking place in high-rise buildings.

How useful would Patriot deployment be in Ukraine?

According to the official, who spoke on condition of anonymity, while one Patriot battery has a long firing range, it only covers a small, broad area, and Ukraine will only receive one Patriot battery, as opposed to the defence system’s usual deployment of a battalion (four batteries). As a result, it will not protect large cities like Kiev, but rather smaller ones like a military base.

According to Alexander Vindman, a retired Army lieutenant colonel who oversaw US policy toward Ukraine under former President Donald Trump, the system is “very, very significant.” If Moscow deploys short-range ballistic missiles, the Patriot missile system will be “quite capable” of dealing with the challenges Russia poses in Ukraine, he added.

According to another former senior military official with the knowledge system, despite sending a powerful message and being effective against short-range ballistic missiles, a single battery will not be a game changer in the conflict. CSIS official Tom Karako told the Associated Press that the Patriot system can help Ukraine defend itself against ballistic missiles supplied by Iran, echoing similar sentiments.

He continued, saying that while the air defence system could also stop a tactical nuclear device, it would depend on how it was launched if Russian President Vladimir Putin followed through on earlier threats to use them. The Patriot’s capability against small drones is also unknown. When the Houthis used Qasef kamikaze drones to attack the US Patriot system in Saudi Arabia in 2017, they targeted the air defence system’s radar. This radar, according to Karako, is more powerful and effective at identifying targets than the Ukrainian S-300 system.

Many people have questioned the Patriot’s success as a result of the incident, which was allegedly captured on video. This comes as reports surface that Russia has been attacking Ukraine’s critical infrastructure with Iranian-made kamikaze drones, including power plants that have rendered millions of homes in the country dark.

Russia’s response to the potential agreement

Even though the deal hasn’t been finalised, the Kremlin has already warned the US that the Patriot air defence system would be a legitimate target for Russian strikes against Ukraine. According to Russian spokesperson Dmitry Peskov, the missile defence system would “definitely” be a target, though he later added that he did not want to comment on unconfirmed media reports.

The Moscow mission in Washington, on the other hand, claimed in a statement that the US is “getting deeper and deeper into the conflict” even without the Patriot systems, and that the proposed transfer would have negative consequences.

L&T Infotech and Mindtree deal has been approved, making it India's 5th-largest IT company by market cap.