Exports have increased significantly during the last two years. India’s industrial exports will expand significantly over the previous two years and will reach $418 billion in the fiscal year 2022. (FY22). Our exports to the world have only been 1.6%, despite the fact that India contributes 3.1% of the global GDP, and given the current forecasts, this percentage has huge potential. 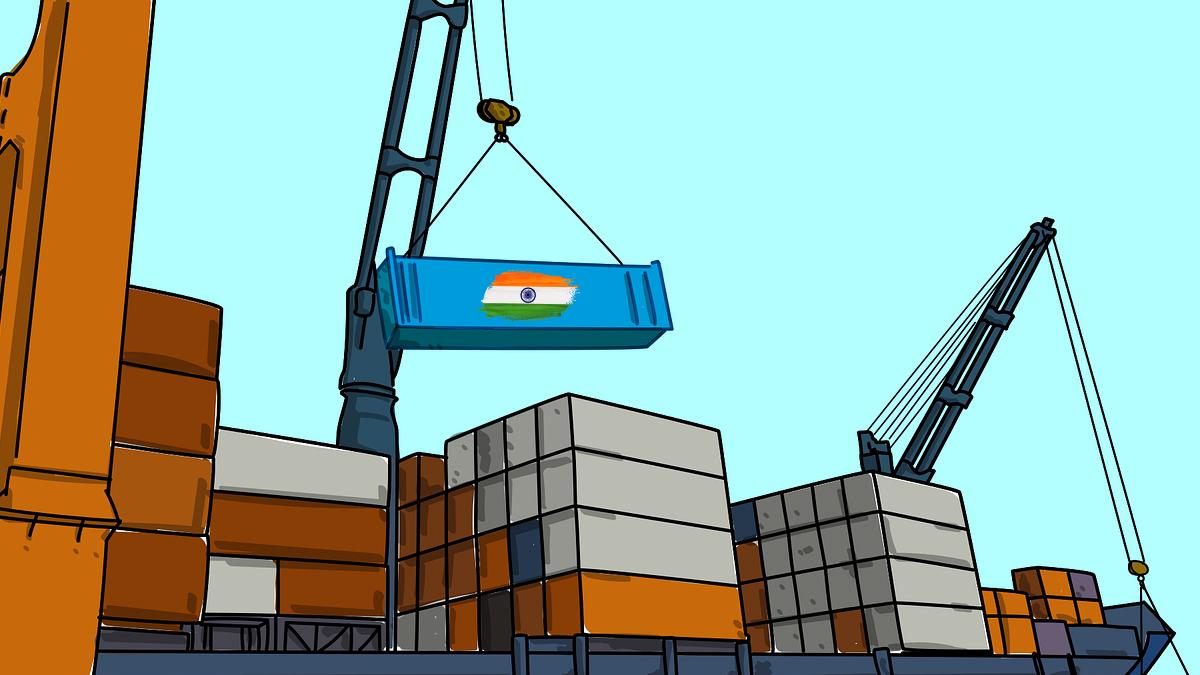 India’s industrial exports are predicted to exceed $1 trillion by 2028. By 2031, manufacturing is expected to account for 21% of India’s GDP, up from the current 15.6%, which would result in a doubling of the country’s export market share. To provide financing to India’s exporters at lower costs, the government has started an interest equalization program.

The United States accounts for 15% of India’s overall exports, followed by the United Arab Emirates (11%), Hong Kong (5%), China (4%), Singapore (4%), and the United Kingdom (3%). Due to the success of the government’s production-linked incentive (PLI) scheme, India is poised to have the fastest-growing economy in the world.

The programme encompasses 13 industries and includes incentives worth Rs. 1.97 lakh crore over five years, including solar energy componentry, cutting-edge batteries, communications, electronics, and auto parts. Additionally, the PLI Scheme is consistent with the government’s Aatmanirbhar Bharat agenda because it is projected to increase local output.

The PLI program is anticipated to generate direct and indirect income of Rs. 49,300 crores, additional investment of Rs. 7,920 crores, incremental output of Rs. 1,68,000 crore, exports of Rs. 64,400 crores, and so on. The administration has already received proposals totaling approximately 6,000 crores of rupees. Additionally, it is anticipated to strengthen India’s export industry. Indian business people create joint ventures overseas to increase the export potential of the goods they produce with foreign partners in emerging nations with favorable political environments and a market for Indian goods. India achieved its highest-ever annual FDI Inflow last fiscal, at US$ 81.97 billion. There are now 863 investment projects being actively considered, totaling $121 billion in investment, including 272 bids that will launch shortly and cost $41 billion. The Indian government has taken several measures to increase both domestic and foreign investment.

In the industries of pharmaceuticals, chemicals, industrial machinery, electronics, automobiles, and textiles, India enjoys a competitive edge. India is one of the top four places for American businesses to relocate.

Trade between India and other nations has reached record highs as a result of the booming demand for consumer goods around the world and the acceleration of sourcing shifts away from China during the COVID-19 pandemic. The US imports from India, which made up about two-thirds of the 1.16 million TEU transported between the two countries in the first half, were a major factor in the upturn.

China is still the largest production hub in the world, but trade disputes, intermittent economic pressures brought on by Beijing’s “zero COVID” policy, and rising labor costs are gradually eroding the country’s position as the dominant player in the market. Automation and worker training have increased industrial efficiency, which has reduced production costs in India, notably for “labor-intensive” consumer goods.

The growth of bank loans has reached its highest level since 2013 (almost 17%), and according to IIP statistics, the growth of capital goods has surpassed pre-COVID levels (16.8%). In FY22, private sector Capex increased, and it is anticipated that this trend would continue in FY23 and FY24. Increased demand visibility, global supply chain diversification, the introduction of new goods, and better balance sheets are some of the main drivers driving different local businesses to add more capacity.

The expected total Capex for the three years from FY22 to FY24 is roughly Rs 10 lakh crore, which is the biggest for any three years to date. Growth and high capacity utilization will result in a six-fold increase in CAPEX over the next five years compared to the previous five.

To encourage creativity, enable investment, construct world-class infrastructure, and position India as a center for manufacturing, design, and innovation, “Make in India” was introduced on September 25, 2014. One of the first “Voice for Local” campaigns that brought attention to India’s manufacturing sector was this one. The industry can employ a significant portion of our youthful labor population while also accelerating economic growth.

Exports increased by 50%, reaching $101 billion in FY22. This is mostly due to the numerous trade agreements India has with foreign countries. Steel, auto components, medical devices, and India’s Make in India effort are all expected to rise further. All MNC enterprises in India that manufacture pumps, tools, carbides, air compressors, engines, and generators are trading at all-time highs, with increased odds of shifting more manufacturing to India. The high cost of labor and energy can intensify this in Europe. Additionally, several MNC organizations have acquired several Indian businesses, and a promoter shift with a cash-rich and worldwide footprint might turn these businesses into global behemoths in the next ten years.

Contributed significantly to India’s exports as crude oil prices increased as a result of the epidemic and were made worse by geopolitical concerns brought on by the conflict in Ukraine. India exports petroleum products for $55.5 billion, a tremendous increase of 150% over the previous year.

Exports by India were $35.3 billion in FY22. This will only increase as a result of the budget for this year’s reduction in the import tax on cut and polished diamonds. Businesses in this industry would benefit from the Emergency Credit Line Guarantee Scheme (ECLGS), which the government introduced in response to COVID-19 for MSMEs. The MSMEs make up 90% of the gemstone and jewelry industry. The US, China, and UAE are our top export destinations, followed by the UK, Germany, Singapore, the Netherlands, and several other countries.

Agriculture exports benefited from the government’s attempts to meet the resulting spike in global food demand. With a $9.65 billion export value, rice is the agricultural crop with the greatest value. Wheat exports and dairy exports both had 288% growth.

Textiles and clothing: In FY22, India’s exports of textiles and clothing, including handicrafts, totaled US$44.4 billion, a 41% YoY increase. In FY22, ready-to-wear garment exports, including cotton accessories, were worth US$6.19 billion. By 2030, it is anticipated that India would produce 7.2 million metric tons of cotton (or 43 million bales weighing 170 kilograms each). For technological textiles and manufactured fibers, a five-year Production-Linked Incentive (PLI) Scheme of Rs. 10,683 crores (US$ 1.44 billion) has been announced.

The government unveiled several programs, including the Mega Integrated Textile Region and Apparel (MITRA) Park program, the Technology Upgradation Fund Scheme (TUFS), and the Scheme for Integrated Textile Parks (SITP). The US is India’s single largest market, and 27% of its total exports in FY22 were textiles and apparel. In FY22, ready-to-wear garment exports, including cotton accessories, were worth US$6.19 billion.

A memorandum of agreement was signed by the Manipur Handloom & Handicrafts Development Corporation Limited and Amazon India (MHHDCL). The Sustainable Textiles for Sustainable Development (SusTex) programme of the United Nations Climate Change Agency will increase the participation of artisans from Asia, especially India, during the next 10 years. The government has allocated 1 billion rupees for the study and creation of technology textiles. The Indian textiles market is anticipated to reach a value of more than US$ 209 billion by 2029.

Exports of machinery and engineering products increased by 50% in FY22 to $101 billion. This is mostly because the industry benefits from the many trade agreements India has with other nations. The government has offered the car industry an almost Rs 26,000 crore incentive. These incentives will aid both domestic and international investors in growing their domestic manufacturing capability. The auto industry’s planned funding of Rs. 26,000 crores is mostly allocated to sectors of electrified vehicles.

India exports plastics, synthetic rubber, filaments, tanning and dyeing products, agrochemicals, and organic and inorganic chemicals. Exports of chemicals and petroleum products were US$ 8.24 billion in FY 2022–23 (up until August 2022). India’s overall export of chemicals in FY 2021–22 was US$ 24,313.88 million, up 38.67% year over year. It is the world’s biggest supplier of generic medications. The nation supplies 20% of the world’s total supply volume and around 60% of the world’s vaccinations. OTC drugs, generics, APIs, vaccines, biosimilars, and custom research manufacturing are significant sectors of the Indian pharmaceutical business (CRM). With a share of 73.31%, formulations and biologics made up the majority of India’s exports, followed by bulk pharmaceuticals and drug intermediates.

In 2021-2022, the country exported pharmaceutical commodities worth $24.62 billion USD. The United States, the United Kingdom, and Russia are the top three importers from India in 2021-22, with 29%, 3%, and 2.4%, respectively. With a total financial investment of Rs. 500 crore (US$ 64.5 million), the Strengthening of the Pharmaceutical Industry (SPI) programme focuses on improving existing infrastructure.

With a production of 10.14 MT as of April 2022, India was the second-largest producer of crude steel worldwide. The domestic accessibility of raw resources like iron ore and the affordability of labor have been the main drivers of expansion in the Indian steel industry. Modern steel mills are present in the Indian steel sector. It has always worked to upgrade older plants to better energy efficiency standards and to modernize them continuously.

Given the interruption caused by COVID-19, NPE 2019 projections for electronics manufacturing in 2025–2026 at US$ 300 billion seem more achievable. India’s local electronics market is predicted to grow from its current US$65 billion over the next 4-5 years to at least US$150-180 billion, if import substitution continues.

If large-scale hearable manufacturing could be intended to address 10% of the Global market by 2024, the hearable and wearable industry is projected to have an overall output of around US$ 8 billion. The average percentage of PCBA in the bill of materials (BoM) is roughly 40%, and the worldwide PCBA market is worth US$600 billion. The exports of each of these segments might vary depending on the important listed businesses in India.

India is regarded as a nation that supports ODM principles as well as patent and design IP rights. By 2026, the goal is to export electronics worth US$120 billion, making it one of the top three categories.

According to the 2019 Assemble in India for the World into Make in India economy survey by the Union Budget, India may increase its export market share to around 3.5% by 2025 and 6% by 2030. This appears to be very likely. Our exports currently account for 20% of our GDP.

It has the potential to expand significantly, given the size of our economy, our potential, and the foundation of our industrial and service industries. To increase exports, India requires a high-quality, smooth supply chain as well as affordable logistics. We believe that, in addition to railway reforms, Gatishakti and logistic parks may play a significant part in this.

There are still challenges, and because the starting point was so high in 2022, development may be slower in 2023. The MSME sector in India accounts for more than 45% of total industrial production. More MSME connection to the rest of the world is thus desperately needed. One of these CBIC efforts was bonded warehouses. By 2026, emerging industries such as space and exports may increase India’s share of global exports. Defense exports are expected to exceed 35,000 crores per year by the end of FY 2025, according to forecasts. Strong recoveries in important markets, increasing consumer spending, accumulated savings, and disposable income as a result of major governments’ fiscal stimulus announcements, a rise in global commodity prices, and an active government export push are the main drivers of this success. United Arab Emirates (UAE), China, and the United States of America (USA) remained the top three export destinations. As investors, we should concentrate on specific, strong companies in these industries that will benefit the most from effectively managing their margins throughout such megatrends.

Saudi Arabia Describes Plans for the Largest Airport in the World