Today, we will be discussing another unicorn startup. We all know that the startups and the businesses had been at a halt because of the COVID 19 lockdown, there were no operations being conducted, no customers were out there.

There was no money with the businesses and the customers, which eventually led to the decrease in the demand for the products and the services, thus causing most of the businesses and startups to suffer an unfortunate time and many of them were eventually closed forever. That time was so hard and harsh on the economy and the nation as a whole, that till today people, the country, the economy are trying their best to revive and come back.

Now, with the opening up of the economy, we are hearing news of funding, acquisitions, mergers, takeovers and what not daily. This year has seen many startups turning into unicorns, a golden club for those startups whose valuation increases post USD 1 billion.

It is a very prestigious and famous club since few startups are able to come up with this position. The year 2021 has been sort of lucky for Indian startups since it has been reported that India is making “three unicorns” per month this year, which is actually double the overall number of unicorn startups in this country.

The latest news of a startup becoming a member of the Unicorn Club has come.

The startup, Apna, as announced on September 16, 2019, has received a funding of USD 100 million. This round of funding was the Series C round of funding and was led by Tiger Global. The other participants of the round were Owl Ventures, Insight Partners, Sequoia Capital India, Maverick Ventures, and GSV Ventures.

This investment received by the startup is its third one this year and the value of the startup after the latest round of funding is USD 1.1 billion, which is double the last valuation. This had made the entry of the startup in the Unicorn Club.

The startup plans to use the funds raised in the domain of product development and expand its team of 280 members in different areas of work like engineering and product. A portion of the funding will be used in the expansion of the startup across the country and target overseas markets like Africa, the Middle East, and the United States next year.

Founded in 2019, by Nirmit Parikh, Apna is an application startup that is engaged in collecting millions of bottom of pyramid workers to employees who have suffered a lot during the COVID 19 lockdown. The startup is sort of a Linkedln for non-English-speaking, poorer Indians. The application aims at helping first-time internet users to get access to the job opportunities by entering their name, age, and skills, to get a virtual business card, which in turn can be shared with potential employees.

It claims itself to be India’s number 1 Professional App. More than 150,000 companies trust Apna. The companies are as follows- Zomato, Burger King, Byju’s, Team Lease Digital, Amazon, Bharti AXA, Urban Company, Phone Pe, Delhivery, Teamlease, and G4S Global. The application of the startup connects about 10 million job seekers like delivery personnel, painters, salesperson, salon workers, and many more. For ensuring that job seeker gets a job quickly, the following features are provided by the startup-
1. Talk to HR directly
2. Lakhs of verified jobs

To make sure that there is career growth, the following features are provided-
1. Meet professionals and experts
2. Learn new skills

The startup is also engaged in providing training to the workers. It offers micro-courses like conversational English, how to act in an online interview and many others like these. The algorithm of the application help in making the hiring process smooth by matching candidates with the right employers and then providing them the training of the interview.

And if the candidate is not able to convert that interview, then the application will prompt the candidate to learn a particular skill. The startup has around 4,000 skills, and many of them are taught by partners or developed in the house. It also has communities for more than 70 professional categories like painting, carpentry, sales, bank office, accounts, driver, and many others. Users can connect to each other in the application and help each other with the leads and tips on improving their job performance.

See also  The Negative Report Of "RT-PCR Diagnostic Test" Is Mandatory For Travelers! Delhi Slashes The Cost Of RT-PCR Testing for "COVID-19"

The Bengaluru based startup has been in partnership with the leading public and private organizations of the country and is assisting and giving its support to the Ministry of Minority Affairs of India, National Skill Development Corporation, and UNICEF YuWaah, in order to provide better skilling and job opportunities to the candidates. The startup has had no revenue till now but has been making experiments with making money from recruitment, skilling, and distribution.

The startup has seen tremendous growth, where in June 2021, there were 10 million users on its application, and they have now increased to 16 million users.

Nirmit Parikh, is the founder and the Chief Executive Officer of the startup, Apna. He is an MBA from Stanford University Graduate School of Business and Btech from Nirma Institute of Technology. He has also been the founder of Incone Technologies, which basically deals in Control Systems in the Hydropower Automation and IT sector.

He has also founded Cruxbot, which helps in designing Artificial Intelligence solutions that have the ability to process vast amounts of information to make complex and subtle logical solutions, thus in a way breaking down the barrier between people and machines. It was later acquired by Kno Inc, Intel Corp. He has also been the Director of New Products at Intel Corporation. From 2016 to 2018, he has worked in Product and Strategy at Apple. 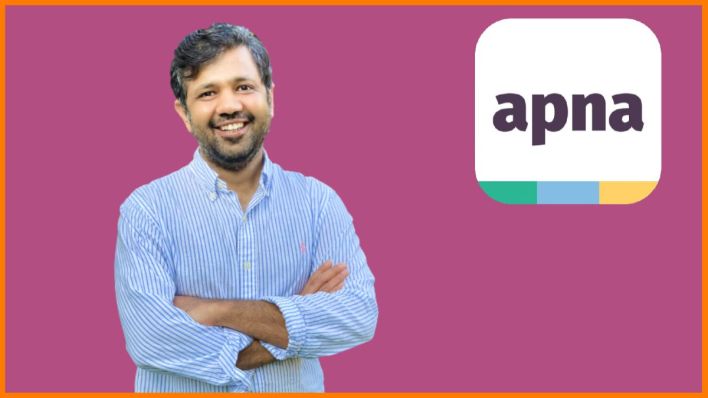 The name of the startup has come from a cheerful 2019 Bollywood song. According to Nirmit Parikh, the idea of the startup came when he saw and was confused that even though there are hundreds of millions of blue and gray collar workers in India, but when their assistance and help are required for a particular task, it becomes very difficult to locate them. He then met these workers to understand the problems faced by them. They told him that the basic problem faced by them is the disconnect. They have no means or a platform to find out who is looking for them.

Founded in 2001, by Chase Coleman III, Tiger Global is an American investment firm which has its focuses on the internet, software, consumer, and financial technology. The New York-based company has some of the notable investments in its list like- Facebook, Credit Karma, Quora, Softbank Group, Spotify, Flipkart, Byju’s, Glassdoor, and many others.

Nirmit Parikh, the founder and the CEO of the startup, Apna, made a statement saying that the startup has already created a dent. The aim now of the startup is to impact the lives of 2.3 billion people, and for fulfilling this aim, the startup requires a crazy amount of resources and a world-class team. He further said that it is a very big task, and someone has to take up and solve it.

Griffin Schroeder, a partner at Tiger Global said that the adoption of Apna is driven by a social and interactive approach that connects employers with job seekers. The job seekers are in search of meaningful connections and it has given the opportunity to Apna to grow explosively across the country and the world.

Apna is the 27th unicorn of the year 2021. The startup has been providing its services during a time when there are job crises all around, thus helping the country. We wish Apna a stroke of good luck and a bright future.