Straws and cutlery made from banned plastic were found in Mumbai and Delhi. Several experts have criticized the ban, saying it is weak and should include big companies, which produce more plastic, and more plastic items.

Mumbai, Delhi, and Bengaluru: Three months after bans on specific single-use plastic goods were enacted in India to combat plastic waste, a report discovered that items were still widely available in Delhi and Mumbai. While retailers lamented the lack of alternatives to these plastic items, experts contend that the prohibition unfairly punishes the most disadvantaged while giving international firms free rein.

India is the world’s fifth-largest producer of plastic garbage. In his Independence Day address in 2019, Prime Minister Narendra Modi urged the populace to eliminate India of single-use plastic. India has outlawed single-use plastic products including plastic straws that are widely strewn yet have no practical purpose as of July 1, 2022. The restriction is intended to reduce plastic pollution since single-use plastic is bad for both land and marine ecosystems.

Little had changed on the ground as of October 1—three months after the ban went into place. In markets, restaurants, and other public spaces in Delhi, Mumbai, and Bengaluru, IndiaSpend discovered several goods made of prohibited plastic being sold. Vendors asserted that there have been neither sanctions taken against users of these items nor warnings to discontinue using them and that these products are still readily accessible at wholesale prices.

The ban has drawn criticism for covering too little of the entire amount of plastic garbage when it was first enacted. Experts also point out that India hasn’t even completely outlawed single-use plastic. They contend that the prohibition unfairly targets the smallest sector of the plastics business, which is also the one that requires the most assistance in making the switch away from single-use plastic. According to experts, India needs to hold the major actors responsible for their proportion of plastic pollution.

IndiaSpend a media company contacted the Central Pollution Control Board and the Union Environment Ministry with inquiries on the ban’s inadequate conceptualization and implementation as well as with issues expressed by suppliers, manufacturers, and industry professionals. 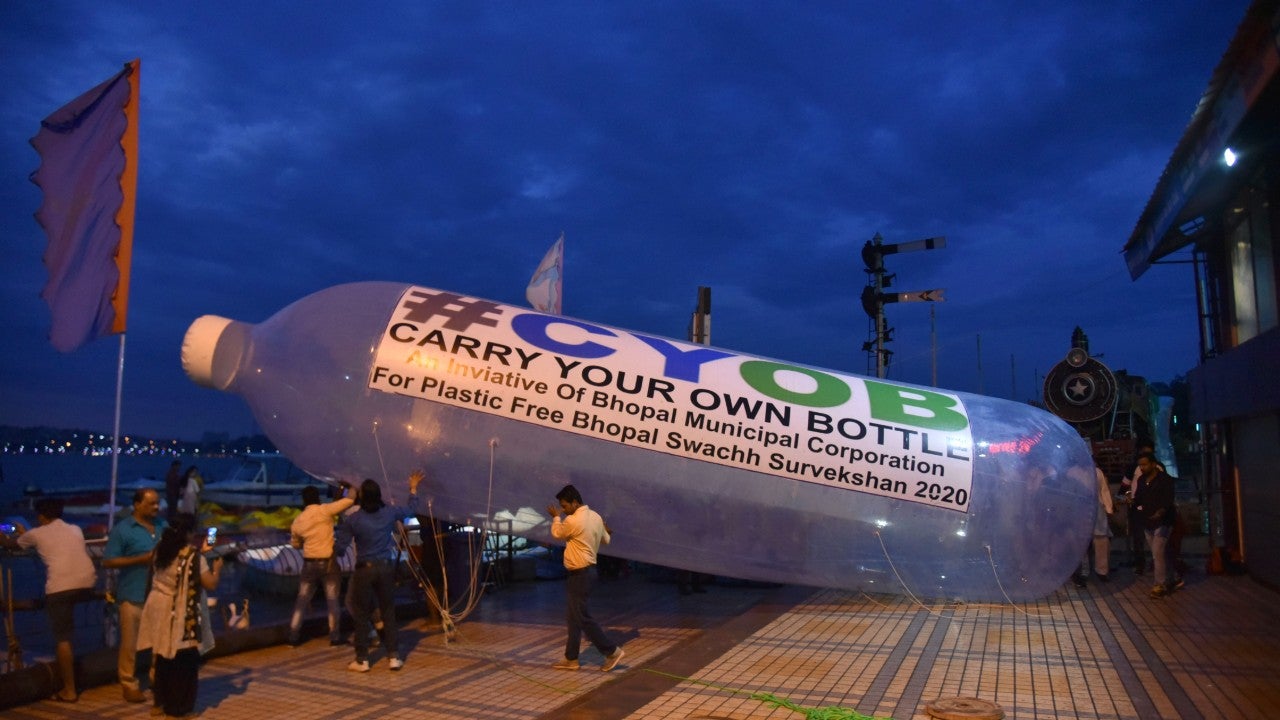 Just 9% of this plastic garbage has been recycled, on average. Most plastic garbage has been dumped in landfills or the world’s seas and other bodies of water. There is widespread consensus that the plastic pollution issue must be addressed, and India was the driving force behind a resolution addressing single-use plastic pollution at the 2019 Fourth United Nations Environment Assembly. In August 2021, India announced the Plastic Waste Management Amendment Rules, and the ban was implemented a year later.

From July 1, 2022, India will outlaw the following single-use plastic products: stirrers, straws, trays, wrapping or packing film around sweet boxes, invitation cards, cigarette packets, plastic or PVC banners less than 100 micron, and plastic sticks for balloons, candy sticks, ice-cream sticks, and polystyrene (thermocol) for decoration. It will also outlaw plastic plates, cups, and glasses. Carry bags thinner than 75 microns are currently prohibited, and bags up to 120 microns will follow suit as of December 31, 2022. Plastic sachets that are used to store, package, or sell gutkha, tobacco, or pan masala are also totally prohibited.

Plastic was produced in millions of tons

Information reported by 35 states and Union territories indicates that India produced close to 3.5 million tonnes of plastic in 2020–21. After Tamil Nadu (12%) and Punjab (12%), Maharashtra makes up 13% of this. At 1.56 million tonnes per year, India’s recycling capability is just half as large as the entire amount of plastic produced.

To fulfil their Extended Producer Responsibility, brands must recycle about 800,000 tonnes annually (EPR). The now-banned single-use plastic makes up a very small portion of the overall amount of plastic produced—between 2 and 3 per cent, to be exact. Therefore, even if the ban had been successful, it would have had little effect on the production of plastic garbage. But the truth is that the prohibition hasn’t even performed halfway well. A review of complaints made by residents against single-use plastic on the CPCB’s smartphone application “SUP-CPCB” reveals that several southern Indian cities received relatively few complaints. Delhi received the most complaints, 605, of which only 378 have been resolved as of September 27, 2022. There were 168 complaints in Ghaziabad. The majority of complaints (138) in Pune were cutlery, and 46 of those were resolved.

In addition, Vadodara received 133 complaints in total, just 43 of which were answered, including 67 concerns regarding plastic cutlery. Based on information from the app dashboard, some Indian towns like Lucknow (106), Hisar (64), and Bijapur (63) had not responded to even one complaint sent through the app. On September 21, IndiaSpend complained via this app about a plastic straw in Mumbai, and the complaint is still displayed as “pending.” In opposition to that, the restriction now in place harms the most disadvantaged sectors of the plastics industry and results in lost revenue and employment. As Kotak India discovered in its July research, it also has an immediate effect on consumers.

According to industry estimates in Kotak India research, among the prohibited goods, the price of straws for low-value packs of juices and other beverages might rise with a switch from plastic to paper, from Rs 0.25-0.30 to Rs 1-1.25 per unit. More than 30% of total volumes are made up of these low-value packets, and moving to alternatives might raise packaging costs, particularly in the case of sachets. The research cautions that any widespread ban on SUP “in the medium future might damage volumes as well as the profitability of the business.”

Overall, this analysis supports the assertion of sector experts that there would be a cascade effect. The cost of using plastic in place of little, low-priced things rises; as a result, consumers buy fewer items, which has an impact on the sector.

Bobby Verghese, a consumer analyst at GlobalData, a for-profit organization that does industry-tracking data, stated that larger makers of plastic items “are expected to diversify their operations to offer sustainable alternatives.” “However, the high cost of these substitutes—ranging from Rs 1 to Rs 5 on average per disposable straw [in comparison to plastic straws]—deters consumers. Instead of setting the price per pack at Rs 10, beverage producers should inform customers about the harm that plastic straws do to the environment and encourage them to spend a little bit more for environmentally friendly packaging.”

The result of the prohibition is what? 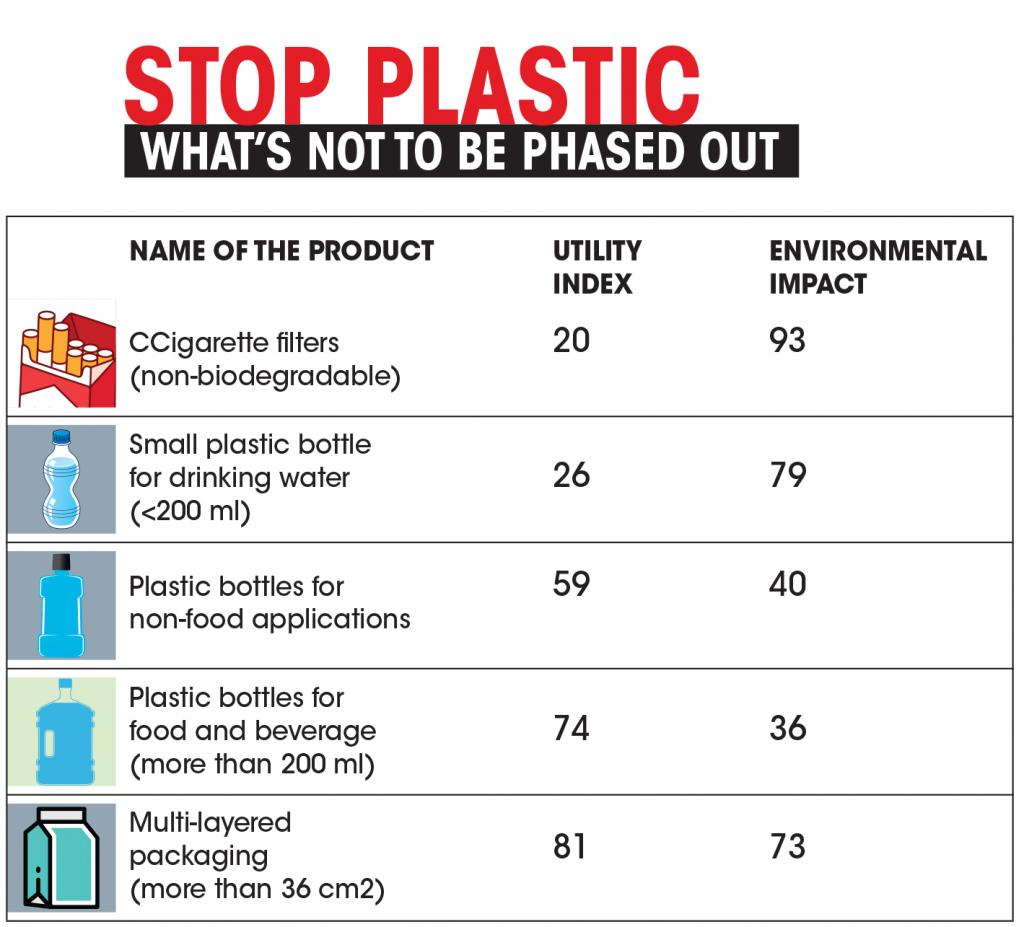 However, educating the buyer is a lengthy process. In the near term, not only has the prohibition had little effect on the usage of SUPs, but it has also resulted in job losses and financial hardship for a portion of the sector.

The prohibition, according to Hiten Bheda, former president of the All India Plastic Producers Association (AIPMA) and head of its environmental committee, will destroy small manufacturers. “The lower sector of this business, which largely provides monolayer packaging, which is simpler to recycle, are most adversely affected, but multi-layered plastics, which are utilized by huge brands and are challenging to recycle and recover from the environment, continue to develop,” adds Bheda. “The latter produce more pollution that is visible and have a larger carbon impact. How is it fair that the “Polluter Pays” principle-based policy has not taken this into account?”

According to Bheda, the smallest manufacturing companies at the base of the pyramid are penalized for no fault of their own and are unlikely to survive under existing regulations while having the greatest potential to create jobs.

Bheda was alluding to issues with EPR where manufacturers, importers, and brand owners who make single-use plastic used in the packaging of goods like cookies, instant noodles, mineral water, etc. do not face a ban as long as they pledge to recycle the amount they produced. A single-use plastics ban has not been enforced in India, according to Atin Biswas, Program Director (municipal solid waste) at the Delhi-based think tank Centre for Science and Environment, since only a very tiny portion of these goods are prohibited. He also questioned the criteria used to decide to prohibit these specific goods.

According to Biswas, “there was insufficient data to infer that these prohibited goods are much more troublesome than those not prohibited.” “A high-powered committee created a scoring system to assess plastic products based on their usability and environmental effect. The catch is that 30-35 brands produce 60% of the plastic trash generated by packaging. Even bottled water is a large portion of this waste. Why do these things not appear?

The unbalanced character of the prohibition is not just pointed out by Biswas. According to Swati Sheshadri, team leader of the Centre for Financial Accountability, “You have targeted a sector that doesn’t have any manoeuvrability capability.” “How can hawkers and merchants be able to purchase paper straws if there is a markup of Rs 2-4? People haggle with them too since they sell non-MRP goods. Those vendors are extremely exposed.

Sheshadri argues, “At least maintain a subsidised vending machine for paper straws. If even this partial ban has to yield results, the lowest layer of the sector will need extensive hand-holding in the early phases. This is a double punishment if you’re going to utilize punitive action without providing them with any respite. “NPAs from large firms are pardoned, but can’t you provide a vendor with subsidized alternatives?

Sheshadri contends that, rather than focusing on the vendors, the government should first target the petrochemical industry, which provides raw plastic materials.